Oscar Pistorius held onto wooden benches for support as he hobbled in front of the judge, and appeared in distress as a cushion was provided for him to rest on 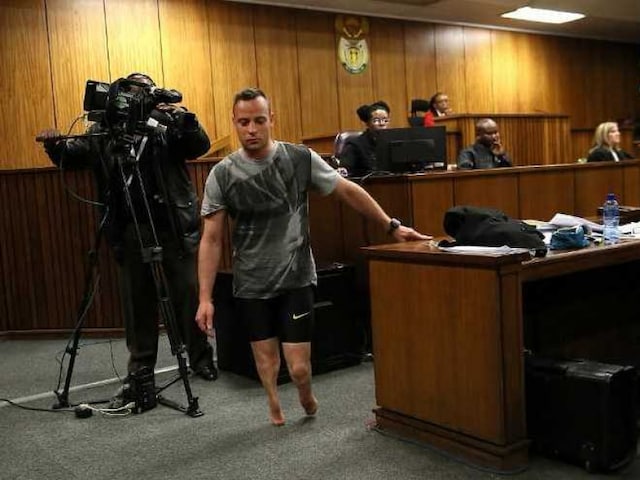 Oscar Pistorius walks in the courtroom without his prosthetic legs during his resentencing hearing for the 2013 murder of his girlfriend Reeva Steenkamp at the Pretoria High Court on Wednesday.© AFP

A sobbing Oscar Pistorius walked hesitantly on his stumps around court Wednesday in a dramatic demonstration of his disability ahead of his sentencing for murdering his girlfriend Reeva Steenkamp.

Wearing shorts, the double-amputee removed his prosthetic limbs at the request of his lawyer Barry Roux as he made a final plea for Pistorius, who faces 15 years in jail.

The Paralympic athlete held onto wooden benches for support as he hobbled in front of the judge, and appeared in distress as a cushion was provided for him to rest on.

Roux and state lawyer Gerrie Nel set out their concluding arguments at the High Court in Pretoria, three years after Steenkamp's death.

Pistorius, 29, shot his girlfriend in the early hours of Valentine's Day in 2013, claiming he mistook her for a burglar when he fired four times through the door of his bedroom toilet.

"It is three o'clock in the morning, it is dark, he is on his stumps," Roux said, stressing his client's vulnerability.

"His balance is seriously compromised and... he would not be able to defend himself. He was anxious, he was frightened.

"His perception that he and the deceased were in danger was fortified by finding the open bathroom window. He believed the person in the toilet was an intruder and deceased was at the time in the bed," Roux said.

In March, the Supreme Court of Appeal found Pistorius guilty of murder -- irrespective of who was behind the door when he opened fire with a pistol he kept under his bed.

The standard jail term for murder in South Africa is 15 years, but Pistorius's sentence may be reduced due to the year he has already spent in prison and mitigating factors, including his disability.

Roux urged judge Thokozile Masipa to "entertain the correct facts and not to be drowned by the many perceptions" whirling around the case that attracted years of intense public scrutiny.

"The accused has lost everything. He can never ever resume his career," Roux said.

"He lost his future... he has paid physically, he is the shadow of the man he was. He is a broken man, he has paid financially, he has paid socially. He is paying constantly."

State lawyer Gerrie Nel started his arguments to push for a severe penalty.

"He knew there was someone behind the door," he said.

"Using a lethal weapon, a loaded firearm, the accused fired not one but four shots to the toilet door," Nel said. "He failed to provide any acceptable version for his conduct."

Pistorius was originally convicted of culpable homicide -- the equivalent of manslaughter -- until the appeal court upgraded his crime to murder.

Judge Masipa, who gave the original verdict, is due to hand down a new sentence for murder after final arguments are completed.

Thursday is a national holiday in South Africa, and the sentence could be given on Friday -- with Pistorius facing an immediate return to jail.

"I never ever heard him say that 'I apologise for shooting, murdering Reeva behind that door'," she told the court.

"We just wanted the truth."

She added that she was uncertain whether Pistorius and Steenkamp were in a truly loving relationship.

Barry Steenkamp, 73, Reeva's father, had broken down in court on Tuesday as he said Pistorius must "pay for his crime" of shooting Reeva, 29, a model and law graduate.

Pistorius was released from jail last October to live under house arrest at his uncle's mansion in Pretoria after serving one year of his five-year sentence for culpable homicide.

He has always denied killing Steenkamp in a rage and, during his seven-month trial in 2014, vomited in the dock as details of his lover's death were examined in excruciating detail.

The year before he killed Steenkamp, Pistorius became the first double-amputee to race at Olympic level when he appeared at the London 2012 games.