The legendary Indian 400m runner also says that Carl Lewis was so awestruck after watching his biopic that the multiple Olympic medallist sent him a baton as a mark of respect. 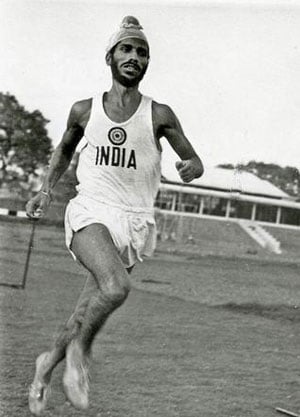 Multiple Olympic gold medallist Carl Lewis was so awestruck by Milkha Singh's rise from a scratch to a top athlete in the world by sheer dint of hard work and will power as depicted in his biopic 'Bhaag Milkha Bhaag' that the legendary American sprinter sent a baton to the Indian as a gesture of respect.

Speaking at a press conference on the eve of 'Run with Flying Sikh Milkha - Save Girl Child' event, which he will flag off here tomorrow, Milkha said that he was touched by Lewis' acknowledgement of his achievements.

"The great Carl Lewis watched my movie at his home in America along with an Indian friend of his. He does not know Hindi and his Indian friend must have done the translation. After watching the movie, he took my phone number from his Indian friend and called me up one day," Milkha said.

"He told me that he was amazed how a village boy who ran barefoot rose from the scratch to become a world record holder (in 400m race). He said in USA, athletes are given scientific training and taught about the importance of fitness, how many hours an athlete needs to do sand running and how to start from the blocks etc," said Milkha who finished fourth in 400m in 1960 Rome Olympics.

"A few days later I got a gift from Lewis, which to my amazement was a baton (used in relay races). On the baton was written 'a present from Carl Lewis, multiple Olympic gold medallist to legendary Milkha Singh. I salute your achievements'. I was touched as I thought I got the ultimate acknowledgement for my hard work from none other than one of the greatest athletes in the history of sports," he added.

Milkha rued that India has not produced another world record holder runner in 60 years and said without academies and quality coaches, the country will remain languishing at the bottom.

"There is a lot of talent in the country. But you need to scout the talents and put them in academies under quality coaches who would be appointed under contract. The coaches would set targets that the wards under them will have to achieve. Until then, Indian sports will not go anywhere.

"I think the media will also have to be blamed for focusing only on cricket. Children in our country want to play cricket, not hockey or football or athletics. It is a worry and not good for Indian sports," he said.

Talking about his quest for excellence and hard work he had put in, Milkha said, "I remembered I used to run from the place where there is National Stadium now up to the Rashtrapati Bhawan. I used to faint reaching there, vomiting blood sometimes.

"I used to train longer than my running partners who refused to run further, saying they don't want to die. My coach kept on nudging me to train more. Once I said I am dying and I cannot run further, he goaded me to continue. That was how I could become a world record breaker," he said.

Talking about the menace of doping, Milkha proposed that the coaches should also be banned for life if their wards were caught for using banned drugs. 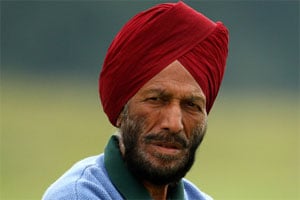 "Not only the athletes who were caught for doping, the coaches should also be banned for life. That way only there will be fear among coaches and athletes," said Milkha, the only Indian track and field athlete to have won a Commonwealth Games individual gold medal in 1958 edition in Cardiff.

"I have not heard nor thought of taking banned drugs during my career. It's the worst menace in sports."

He said athletics in the country has been going down the drain over the years.

"Imagine, since independence there have been only seven Indian athletes who have reached the finals of their respective events in Olympics. We are going down in athletics and it has now become the dirtiest sport with maximum number of doping cases," he said.

Milkha said he was enjoying adulation from the people after the success of his biopic.

"Everyday, 200-300 letters reach my home in Chandigarh, writing how they appreciate my hard work and my achievements. Children, youngsters and even old people will come to my home or they will click a photo with me wherever they meet me."

Asked about his mantra of staying fit, he said, "Eat less, do exercise and stay happy. Nowadays, I go for jogging four days a week, I don't eat more than what is required and I try to be happy with my life," he said.

Comments
Topics mentioned in this article
Athletics Los Angeles Memorial Coliseum USA Seoul Stadium Amtitsar Govindsingh Milkha Singh
Get the latest updates on IPL 2020, check out the IPL Schedule for 2020 and Indian Premier League (IPL) Cricket live score . Like us on Facebook or follow us on Twitter for more sports updates. You can also download the NDTV Cricket app for Android or iOS.