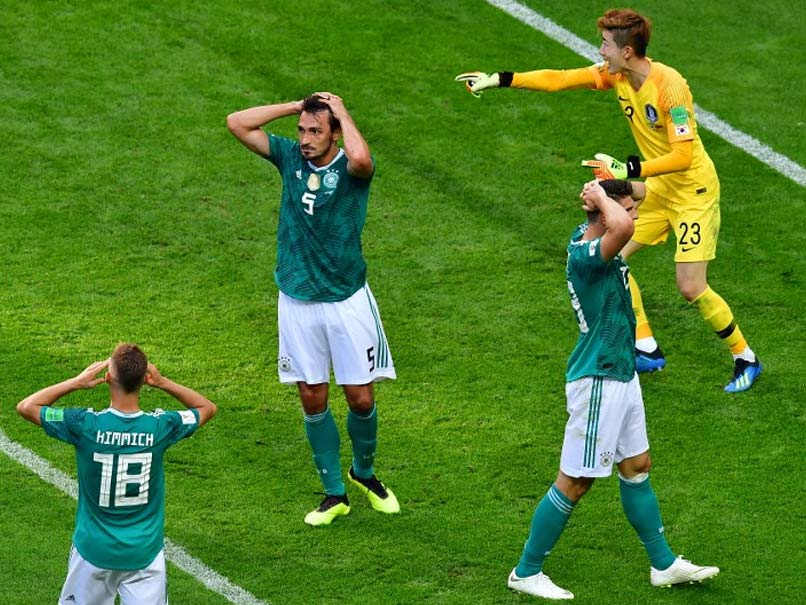 Defending champions Germany were knocked out of the World Cup after a humiliating 0-2 loss at the hands of Korea Republic in their final Group F fixture at the Kazan Arena on Wednesday. Both goals came in the stoppage time with Kim Young-Gwon (90'+2 minutes) and Son Heung-Min (90'+6 minutes) scoring for Korea Republic. The Koreans were solid defensively specially their goalkeeper Cho Hyun-woo, who thwarted all German shots that came at him. Germany were poor with their finishing and their lack of coordination in that match was visible in their lacklustre passing. Matt Hummels missed three chances to give the Germans a victory but fate had other plans as they were eliminated by Korea Republic. (Highlights:KoreaRepublic vs Germany)

Earlier, Korea Republic kept Germany under check as the first half between them ended goalless in their final Group F clash at the Kazan Arena. Son Heung-min came closest to scoring but he over hit the ball that parried over the German goalkeeper Manuel Neuer's head. Germany initially enjoyed possession but Korea Republic got into the game later. Both teams had no attacking intent early on but Korea Republic looked more likely to open the scoring. Germany's Matt Hummels had a chance to bury the ball into the back of the net but his shot was saved by the South Korean keeper in the 38th minute.

21:45 IST: Thank you for staying with us for the live match updates.

21:25 IST: GOAL! Korea Republic are 2-0 up as Germany is surely crashing out of the tournament.

21:21 IST: GOAL! After VAR review, South Korea are 1-0 up and that surely is sending Germany out of the tournament. This is beyond belief and difficult to fathom for the German fans.

21:19 IST:Germany are now on the brink of elimination. No one would have expected this before the tournament commenced.  | Germany 0-0 Korea Republic after 90 minutes

21:16 IST: WHAT A CHANCE MISSED!Hummels should have headed that home. Their poor finishing has cost them the match. Final 2 minutes to go.

21:14 IST:This match has been a case of poor finishing for both these teams. Germany have been lacklustre in this match. Unless they conjure up something now, Germany are heading home. Final 5 minutes to go.

21:00 IST:Gomez was there and somehow that didn't go into the South Korean net. Germany still in need of a miracle. Final 18 minutes to go.

20:57 IST:Ozil ad Mario Gomez seem to be forgetting about each other. Ozil thought Gomez was there to collect his pass but it turned out to be an opposition playerGermany needs to do something about this. Germany need a goal and that can see them qualify and Mexico crash out. | Germany 0-0 Korea Republic after 68 minutes

20:54 IST:Son Heung-min gets booked for simulation in the 64th minute

20:52 IST: Substitution! Germany's Thomas Muller comes in for Goretzka. In the other ongoing match, Sweden have scored another goal against Mexico and that result is making things difficult for Germany.

20:49 IST:Kimmich and Khedira both see their shot blocked. Germany have failed to breach the South Korean defence. It seems they are devoid of any attacking ideas. | Germany 0-0 Korea Republic after 60 minutes

20:43 IST:Germany attack down the left and Hector reaches the byline. He chips a cross back to Werner, who blasts a simple volley wide! What a miss! Should have scored there.

20:39 IST:SAVE! Goretza header is saved by the Korean Republic goalkeeper in the 48th minute. | Germany 0-0 Korea Republic after 50 minutes

20:13 IST:We are getting closer to the halftime now.

20:10 IST: CHANCE! 38th minute for Germany.Matt Hummels fails to finish from close range. No power whatsoever in his shot. This match is still goalless with five minutes to go for the halftime.

20:01 IST:30 minutes into the game and we have an even contest here. No clear cut chances but Korea Republic had two chances to go in front. Germany have lost their momentum after early chances.| Korea Republic 0-0 Germany after 33 minutes

19:55 IST: CHANCE!Korea Republic had the chance to go ahead but Son over hits the ball and sends it to the stands. The Koreans are now getting to stamp their authority on this game.| Korea Republic 0-0 Germany after 25 minutes

19:49 IST:Neur spills the ball from a free kick but thankfully there is no goal. Lucky escape for Germany. | Korea Republic 0-0 Germany after 19 minutes

19:46 IST:Quite a slow start to the game. Germany are trying to hard while Korea Republic aren't applying any sort of pressure on them.| Korea Republic 0-0 Germany after 16 minutes

19:39 IST:South Korea's Jung charges towards Ozil and slides to win the ball. It's a heavy, aggressive challenge and although he makes contact with the ball, Jung also sends Ozil flying. Jung gets a yellow card, who will be suspended if South Korea manage to reach the second round. | Korea Republic 0-0 Germany after 10 minutes

19:34 IST:The Germans are bossing the midfield at the moment. Korea Republic players are trying to get their foothold into this match. | Korea Republic 0-0 Germany after 4 minutes

19:23 IST:We are moments away from the kickoff now. The teams are out of the tunnel now for their respective National Anthems.

19:17 IST: You may also catch the live updates of the other match between Mexico and Sweden here

18:00 IST:Hello and welcome to the live match updates of the final Group F match between Germany and South Korea.

Speaking ahead of Wednesday's game, Sorg said Hummels has recovered from a neck problem but that Rudy's participation was still in question after undergoing an operation to fix a broken nose he picked up in Germany's dramatic 2-1 win against Sweden on Saturday. South Korea captain Ki Sung-Yueng is set to miss the clash against Germany due to a muscle injury, the Korea Football Association said on Monday. The Swansea City midfielder sustained a left calf injury during Saturday's 2-1 loss to Mexico at Rostov Arena.

Korea Republic Live Blogs Football
Get the latest updates on ICC T20 Worldcup 2022, check out the Schedule and Live Score. Like us on Facebook or follow us on Twitter for more sports updates. You can also download the NDTV Cricket app for Android or iOS.