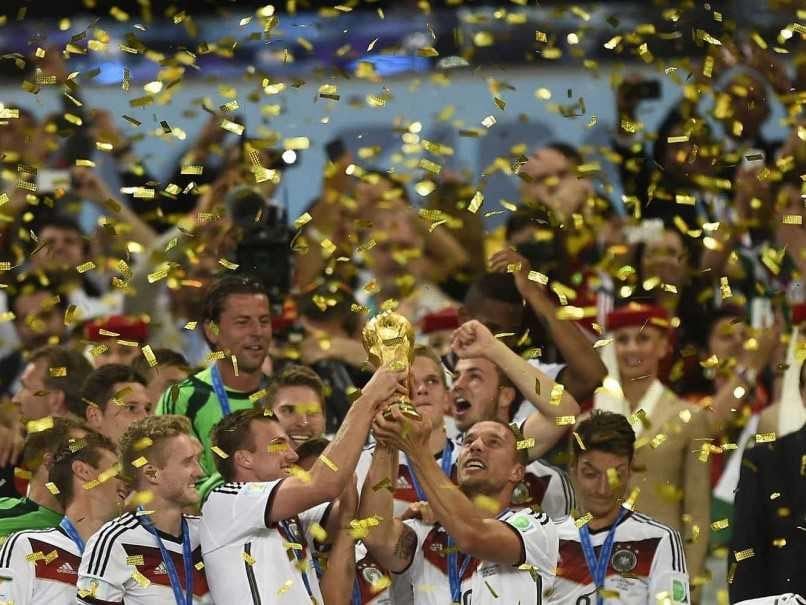 Germany will look to defend the World Cup title they won in Brazil 2014.© AFP

The 2018 FIFA World Cup is upon us and 32 teams will be vying for that coveted title with the final scheduled for July 15 at the Luzhniki Stadium in Moscow. After a wait of four years, football's showpiece tournament has reached Russia after Brazil hosted the 2014 event successfully. Germany beat Argentina 1-0 in the final to clinch the trophy while hosts Brazil finished fourth in the tournament. As we approach the FIFA World Cup beginning June 14, we bring you a low-down of the top five contenders for the trophy this time around.

Winners of 2014 World Cup, holders Germany have an edge over rest and they boast of a formidable team led by flamboyant coach Joachim Low. The reigning champions remained unbeaten in the qualifiers, winning ten of their games, scoring 43 goals and conceding only 4. Their goals in the qualifiers were the highest in all European groups alongside Belgium.

Despite a plethora of individual talent, Germany's team spirit has been their forte throughout and a charismatic manager in form of Low has always seen them better their opponents on a regular basis.

Goalkeeper Manuel Neuer's fitness has been the biggest concern, but Barcelona's Marc-Andre ter Stegen can step in for him. Toni Kroos, Mesut Ozil, Thomas Muller and Mats Hummels are few of the top names part of this team. Germany are placed in Group F with Mexico, Sweden and the Korea Republic

Spanish teams have shone at the domestic club level but their frailties on the international stage cannot be overlooked. New coach Julen Lopetegui believes Spain can change their fortunes and feels his team can win the World Cup. Spain progressed through the qualifiers winning nine and drawing one of their 10 games while scoring 36 goals and conceding only three.

Spain's possession-based football between 2008 and 2012 had won them plaudits across all quarters. The 2010 World Cup winners had a disappointing 2014 campaign in Brazil. Spain crashed out in the group stage of the World Cup after being ripped apart by the Netherlands and overrun by Chile. In 2016, they reached the knock-out stage of the European Championship but were outplayed by Italy and fortunate even to escape a more emphatic defeat than 2-0.

Brazil were on the brink of elimination during the qualifiers when Dunga was still their coach. When Dunga was sacked, the team was in sixth place and at risk of not making it to Russia. After Tite's appointment, Brazil saw an upturn in their fortunes after becoming the first national team to secure its place in the World Cup, finishing atop the South American qualifiers table.

A cruel injury to Neymar in the 2014 edition saw his team pummel to a 7-1 humiliation at the hands of eventual winners Germany in the semi-finals.

Belgium didn't have to worry much during their qualifiers. They were up against Greece, Bosnia and Herzegovina, Estonia, Cyprus and Gibraltar in Group H. Barring a draw against Greece, Belgium sailed through the group stages and qualified for the World Cup.

This team has stalwarts in all their positions. Thibaut Courtois in goal. Jan Vertonghen, Toby Alderweireld and Vincent Kompany in defence, Mousa Dembele, Kevin de Bruyne and Axel Witsel in the middle of the park. Eden Hazard, Romelu Lukaku and Michy Batshuayi will be leading the Belgian charge in the showpiece event. De Bruyne will be key for this team as he was pivotal in Manchester City clinching the English Premier League title. With Hazard around him, this Belgium team can wreak havoc on the opposition.

Managed by Roberto Martinez, this team will look to banish their previous World Cup performance that included the same crop of stars. With a new manager at the helm, Belgium will hope to live up to their heavyweight tag and vie for the top honours.

Placed in Group B in the qualifiers amongst Netherlands and Sweden, France topped with four points ahead of both Holland and the Swedish team. France have an array of exceptional and enviable talent in all the positions. Coach Didier Deschamps will surely have a selection dilemma ahead of the World Cup.

This French side have players like Paul Pogba, Kylian Mbappe and Antoine Griezmann. Griezmann will be key to France's progress in the tournament. He was the top scorer and the player of the tournament in the UEFA Euro 2016. In the qualifiers, Griezmann scored four goals and an equal number of assists for Les Bleus.

France are placed in Group C with Australia, Denmark and Peru.

The FIFA World Cup 2018 will begin on June 14 and last till July 15. Hosts Russia will take on Saudi Arabia in their opening Group A clash on June 14 at the Luzhniki Stadium in Moscow.

Brazil 2018 FIFA World Cup Football
Get the latest updates on ICC Women's Cricket World Cup 2022 and IPL 2022, check out the Schedule , Live Score and IPL Points Table. Like us on Facebook or follow us on Twitter for more sports updates. You can also download the NDTV Cricket app for Android or iOS.