The South Americans take on the hosts in their final Group A match on June 25 with top spot on the line, while Egypt and Saudi Arabia have been eliminated after both suffered back-to-back defeats. 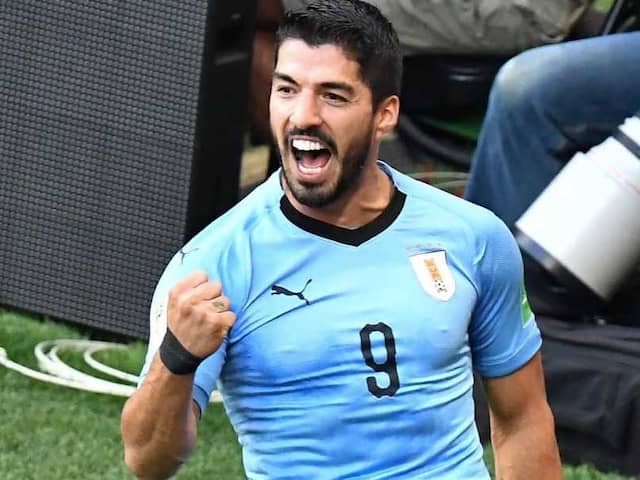 Uruguay booked their place in the World Cup knockout stage along with Russia on Wednesday, as Luis Suarez scored the winner on his 100th international appearance in a 1-0 victory over Saudi Arabia in Rostov-on-Don. The South Americans take on the hosts in their final Group A match on June 25 with top spot on the line, while Egypt and Saudi Arabia have been eliminated after both suffered back-to-back defeats. Russia and Uruguay will face one of the top two from Group B in the last 16 -- either Portugal, Spain or Iran. The 31-year-old Suarez, whose previous two World Cups both ended in bans after his infamous 2010 handball against Ghana and bite on Italy's Giorgio Chiellini four years later, took advantage of a goalkeeping error by Mohammed Al-Owais to put Uruguay ahead midway through the first half.

Oscar Tabarez's side missed plenty of opportunities to add further goals, but a toothless Saudi outfit never seriously looked like snatching a point.

Uruguay, semi-finalists eight years ago in South Africa, have now reached the knockout stage for the third straight time, while Saudi Arabia will try again in their search for a first World Cup win since 1994 in their final game against Mohamed Salah's Egypt.

Suarez made a bright start, looking to make amends for his poor performance in the opening 1-0 win against Egypt, firing a left-footed volley from Cristian Rodriguez's knockdown which was blocked by Ali Al-Bulayhi.

The Saudis managed to have plenty of early possession, although without looking overly threatening, only to gift Uruguay a 23rd-minute lead.

Al-Owais -- winning only his second cap after replacing Abdullah Al-Muaiouf in goal -- completely missed a floated Carlos Sanchez corner and Suarez tapped in his 52nd international goal unmarked at the back post.

That strike was Suarez's sixth World Cup goal and made him the first Uruguayan to score in three separate finals.

Juan Antonio Pizzi's Saudi Arabia continued to look far more assured on the ball than they did in the 5-0 drubbing by Russia on the opening day of the tournament, with Hatan Bahbri firing a wild volley over shortly after seeing a long-range effort tipped away by Fernando Muslera.

Uruguay began the second period with greater purpose, and Suarez came close to a second when Al-Owais palmed clear his low free-kick.

The three points and a last-16 spot should have been wrapped up just after the hour mark, but Sanchez headed over when unmarked at the back post from a wonderful Edinson Cavani cross.

The South Americans continued to be wasteful in front of goal, as Martin Caceres sent a header flying off target from the 33-year-old Sanchez's free-kick.

Paris Saint-Germain striker Cavani came close to emulating Suarez by scoring in a third World Cup, but his low shot was smothered by the onrushing Al-Owais.

Uruguay showed all their know-how and experience, though, as Atletico Madrid defensive pair Jose Gimenez and Diego Godin helped see out the closing moments with ease.

Luis Suarez Edinson Cavani Football
Get the latest Cricket news, check out the India cricket schedule, Cricket live score . Like us on Facebook or follow us on Twitter for more sports updates. You can also download the NDTV Cricket app for Android or iOS.