Jose Gimenez rose to power a header into the top corner and break Egypt hearts. 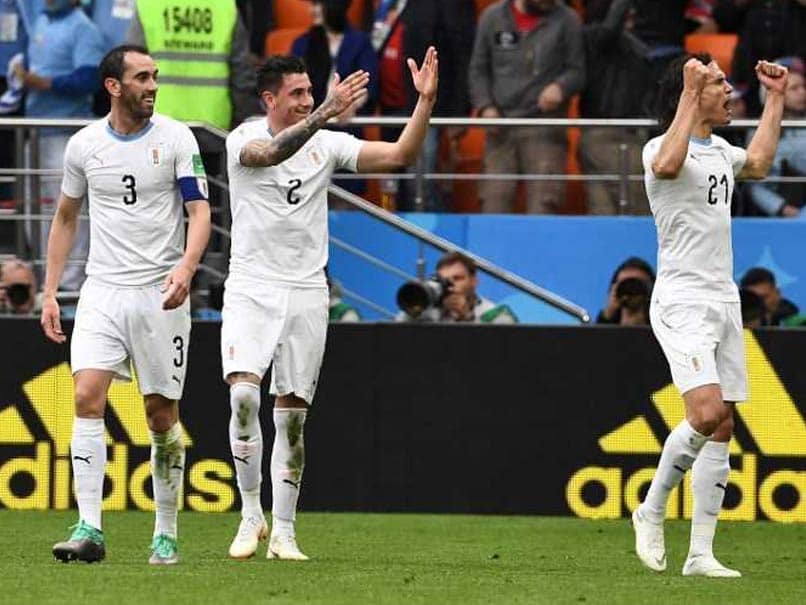 Jose Gimenez scored in the 90th minute for Uruguay vs Egypt in the World Cup 2018 Group A match.© AFP

Jose Gimenez was the unlikely 89th-minute match winner as Uruguay defeated an Egypt side shorn of star man Mohamed Salah 1-0 in their World Cup 2018 opener on Friday. Uruguay's deserved last-gasp victory leaves them and Russia in early control in Group A after the hosts' 5-0 mauling of Saudi Arabia in the tournament opener on Thursday. A poor game looked likely to end in stalemate but with Uruguay cranking up the pressure late on, defender Gimenez rose to power a header into the top corner and break Egypt hearts.

Aside from Liverpool ace Salah failing to get off the bench with his shoulder injury, another major talking point was also off the pitch -- large portions of empty seats in one main stand at the Ekaterinburg Arena were an embarrassing sight for FIFA and local organisers.

Paris Saint-Germain striker Edinson Cavani had a couple of half-chances for Uruguay in the first half, the best made by himself when he juggled the ball and lashed it on the volley from outside the box, but it was deflected over.

Attacking partner Luis Suarez -- in his first World Cup appearance since his biting ban of 2014 -- was largely quiet in an unremarkable first period, doing his best work when he drifted between the lines of Egypt's defence and midfield.

Marwan Mohsen played as a lone forward for Egypt, but with Salah missing and Uruguay skipper Diego Godin imperious, he hardly had a sniff.

One of the biggest cheers came after 30 minutes when the stadium screens showed Salah happily chatting away on the bench but that is where the birthday boy -- who turned 26 on Friday -- remained.

With Egypt coach Hector Cuper saying on the eve of the clash that Salah had recovered from the injury sustained three weeks ago in the Champions League final, Egyptians will be desperately hoping their talisman is back for the game with Russia on Tuesday, now a must-win.

The north Africans, contesting their first World Cup since 1990, were for the main part fairly comfortable in defence and Arsenal's Mohamed Elneny was a constant presence at the base of Egypt's midfield.

Suarez, who had a frustrating afternoon, forced goalkeeper Mohamed Elshenawy into a decent stop straight after half-time, the Barcelona striker slamming his boot into an advertising board in anger.

He thumped the turf on 73 minutes when Elshenawy smothered at his feet, and seven minutes from the end the stopper was at it again, palming Cavani's drive over.

Cavani then struck a post with a free-kick as Egypt held on with increasing desperation, before Gimenez's dramatic late intervention.

Luis Suarez Egypt vs Uruguay, Match 2 2018 FIFA World Cup Football
Get the latest updates on India vs Australia Series, check out the India vs Australia Schedule for 2020-21 and Ind vs Aus live score . Like us on Facebook or follow us on Twitter for more sports updates. You can also download the NDTV Cricket app for Android or iOS.