Luis Suarez will be hoping for a successful 100th international game when Uruguay take on Saudi Arabia in a World Cup Group A match. 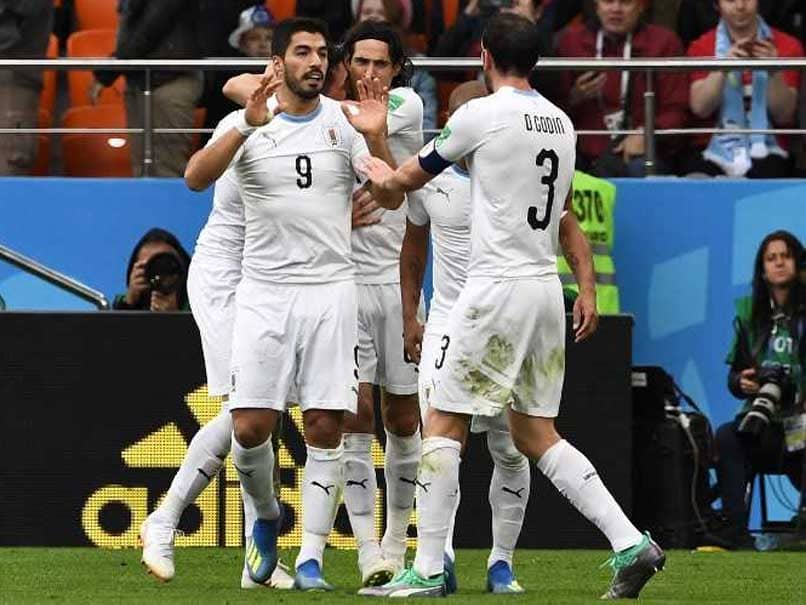 Luiz Suarez all set for his 100th international appearance.© AFP

Star player Luiz Suarez all set for his 100th international appearance as Uruguay take on bruised and battered Saudi Arabia in their FIFA World Cup match at Rostov Arena in Rostov-on-Don on Wednesday. Central defenders Godin and Gimenez proved decisive in Uruguay's 1-0 win over Egypt in their first Group A clash on Friday. The match should be routine and could secure Uruguay's passage to the knockout stage, but with Suarez football fans know that very few things are mundane.

Uruguay may make changes to midfield, bringing in Carlos Sanchez and Cristian Rodriguez ahead of Nahitan Nandez and Giorgian de Arrascaeta on Wednesday.

Saudi Arabia still smarting from their opening day 5-0 drubbing by Russia could make wholesale changes as they desperately try to stay in the tournament.

The Saudis preparations were jolted by a mid-air mishap on Monday when the plane carrying them to Rostov suffered a fire in one of its engines.

The aircraft landed safely after what one of the Saudi players called a "simple malfunction".

"It was a small fire in one of the engines, the right engine, but the plane landed safely," association president Ahmad Al Harbi told Saudi sports TV channel KSA.

In 2010, Suarez was sent off after making a last minute "save" against Ghana, which helped avoid defeat and saw the South Americans progress to the last four. The incident became so infamous it got its own Wikipedia entry -- Suarez even described it as the best save of the tournament -- but that was nothing to what happened four years later.

In 2014, he was banned from all football for four months and fined after biting Italy's Giorgio Chiellini, the third biting incident of his career. Uruguay players have hit out at the way Suarez was subsequently treated by the footballing authorities, but their protests have garnered little empathy outside the country.

Despite the ever-present controversies, the 31-year-old is Uruguay's record goalscorer, scoring 51 times in 99 matches.

Five of those have come in the World Cup and despite a sluggish start in Uruguay's 1-0 opening game win against Egypt, the match against a weak Saudi Arabia side may offer him the chance to celebrate his centenary in style.

Uruguay midfielder Cristian "Cebolla" Rodriguez on Monday praised his teammates Diego Godin and Jose Maria Gimenez ahead of their duel with Saudi Arabia.

"They are the best central defenders in the world," Rodriguez said at a press conference for Wednesday's match, adding that they have been putting in a good performance for years.

"The kids are doing a very good job," he said.

"When they play, they show how mature they are and this is positive for the national team," the 32-year-old midfielder added.

Luis Suarez 2018 FIFA World Cup Football Uruguay vs Saudi Arabia, Match 19
Get the latest updates on IPL 2020, check out the IPL Schedule for 2020 and Indian Premier League (IPL) Cricket live score . Like us on Facebook or follow us on Twitter for more sports updates. You can also download the NDTV Cricket app for Android or iOS.