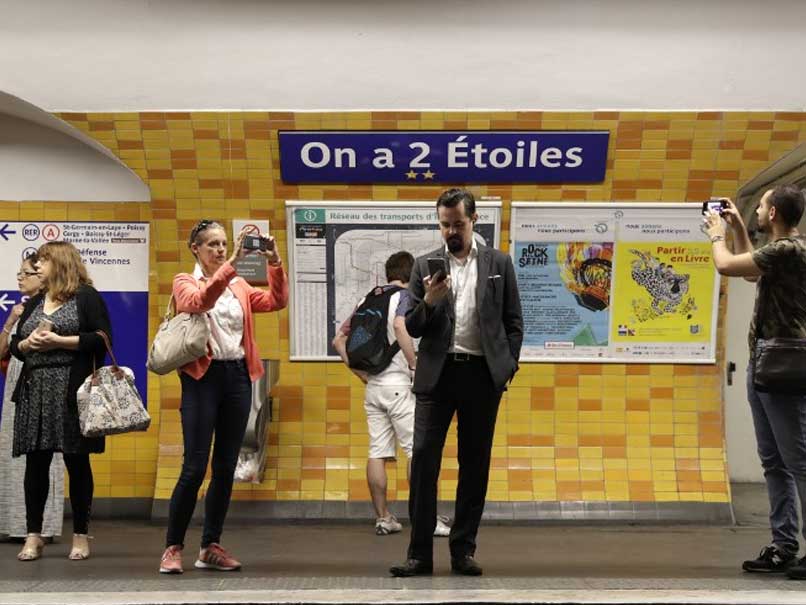 The station Charles de Gaulle-Etoile was turned into "On a 2 Etoiles".© AFP

Six Paris metro stations were temporarily renamed in honour of France's World Cup winning champions after their 4-2 roller-coaster victory against Croatia. Among the changes, station Victor Hugo became "Victor Hugo Lloris", named after the team's captain and goalkeeper, whose second half mistake gave Croatia faint hopes of a late comeback. The metro stop at Bercy has become "Bercy les Bleus", a play on words to thank the team. The station Avron has taken the name "Nous Avron Gagne", a play on the French to mean "We have won".

Charles de Gaulle-Etoile was turned into "On a 2 Etoiles", meaning "We have two stars" -- referring to the country's first World Cup win on home soil in 1998 and last night's victory in Russia.

Notre-Dame des Champs has become "Notre Didier Deschamps", while Champs-Elysees- Clemenceau has been changed to "Deschamps Elysees-Clemenceau" -- both stations pay tribute to the team's coach Didier Deschamps, who was also a midfielder in the 1998 side.

It said the squad will use an open top double-decker electric bus to greet fans between the Place de l'Etoile, site of the Arc de Triomphe, and the Elysee Palace.

The players are expected to land at Roissy Airport on Monday afternoon and will be taken directly to the celebrations before being received by President Emmanuel Macron.

Hugo Lloris France vs Croatia, Final
Get the latest updates on ICC T20 Worldcup 2022, check out the Schedule and Live Score. Like us on Facebook or follow us on Twitter for more sports updates. You can also download the NDTV Cricket app for Android or iOS.