Didier Deschamps said France were "swimming in happiness" after his players interrupted his post-World Cup final press conference, dancing and showering their manager in drinks as they celebrated their 4-2 win over Croatia. 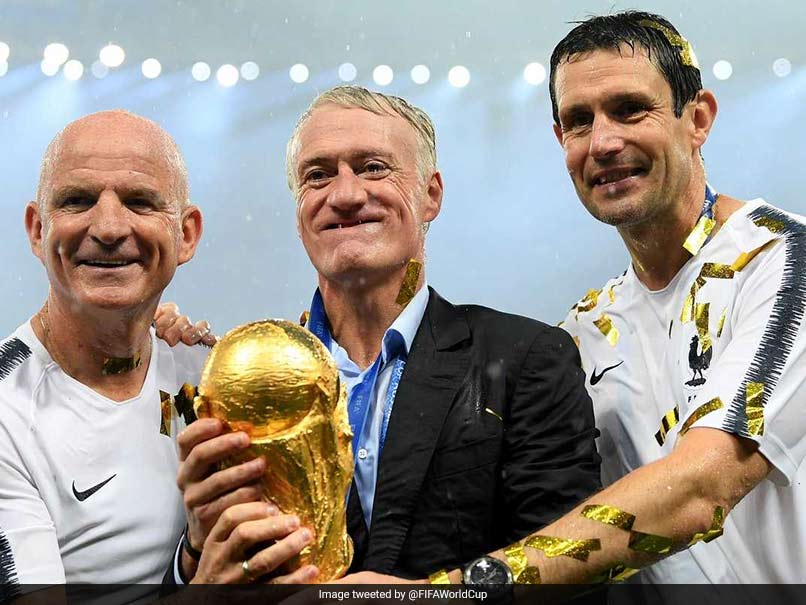 Didier Deschamps becomes just the third man to win the World Cup as a player and a coach.© AFP

Didier Deschamps said France were "swimming in happiness" after his players interrupted his post-World Cup final press conference, dancing and showering their manager in drinks as they celebrated their 4-2 win over Croatia. The coach was about to start speaking when the squad came into the room packed full of journalists at the Luzhniki Stadium in Moscow, with defender Benjamin Mendy leading the celebrations as he danced with his shirt off. Deschamps then tried to compose himself to give his view on France's second World Cup triumph -- he was the captain of the team that won the trophy in 1998 by beating Brazil 3-0 in Paris.

"My story is linked to that of the players. I had the immense privilege and happiness to experience that as a player 20 years ago, and it was in France as well so it will remain with me forever.

"But what they have done today is just as big and just as beautiful," said Deschamps.

His team took the lead through a Mario Mandzukic own goal, and then went back in front courtesy of an Antoine Griezmann penalty after Ivan Perisic had equalised for Croatia.

Paul Pogba and Kylian Mbappe both scored in the second half to put France out of sight, and they could even afford to see Mandzukic pull a second goal back for Croatia after an awful Hugo Lloris mistake.

"For the young kids today -- I have a boy who is 22 -- we were world champions but they were too young to understand it.

"But now the generation who are 10, 15 or 20 years old, to have experienced this, have this happiness... we will really realise tomorrow and in the days to come, what they have done."

The coach knows what the future will be like for this generation of World Cup winners, who will go down in history like the team of Deschamps and Zinedine Zidane two decades ago.

"There are two things that matter -- one is that these 23 players are now together for life, whatever happens, and also that from now on they will not be the same again, because they are world champions.

"To be champions of the world as professional footballers, there is nothing better."

Deschamps becomes just the third man to win the World Cup as a player and a coach, following in the footsteps of Brazil's Mario Zagallo and Germany's Franz Beckenbauer before him.

"It's a real pleasure, it is a very closed circle. We have had the same success, but they were two great players. I was not as attractive as a player but I still won titles.

"I am honestly so much happier to see the delight of the players. They are world champions. Kylian Mbappe is just 19, and I hope he will win it again but you never know."

France's triumph is made even sweeter after they lost 1-0 to Portugal as hosts in the final of Euro 2016, although the majority of the squad in Russia were not there two years ago.

Deschamps believes the 4-3 win over Lionel Messi's Argentina in the last 16, when Mbappe scored twice, was a trigger for them to go on and win the trophy.

"It gave even more strength to my squad. I believed in them but then you need to see what happens, because it only took us through to the quarter-finals," said Deschamps, whose team beat Uruguay 2-0 in the last eight and then edged out Belgium 1-0 in the semi-finals.

"If we had then slipped up against Uruguay a few days later, it would have been good but it would not have meant much.

"It was so painful at the Euro, but maybe if we had won it we would not have won the World Cup."

Croatia Football France vs Croatia, Final 2018 FIFA World Cup
Get the latest updates on ICC T20 Worldcup 2022 and CWG 2022 check out the Schedule, Live Score and Medals Tally. Like us on Facebook or follow us on Twitter for more sports updates. You can also download the NDTV Cricket app for Android or iOS.