Thursday's Doodle features teams from Group C and Group D that will be in action in Russia - Denmark, Australia, France, Peru, Argentina and Croatia. 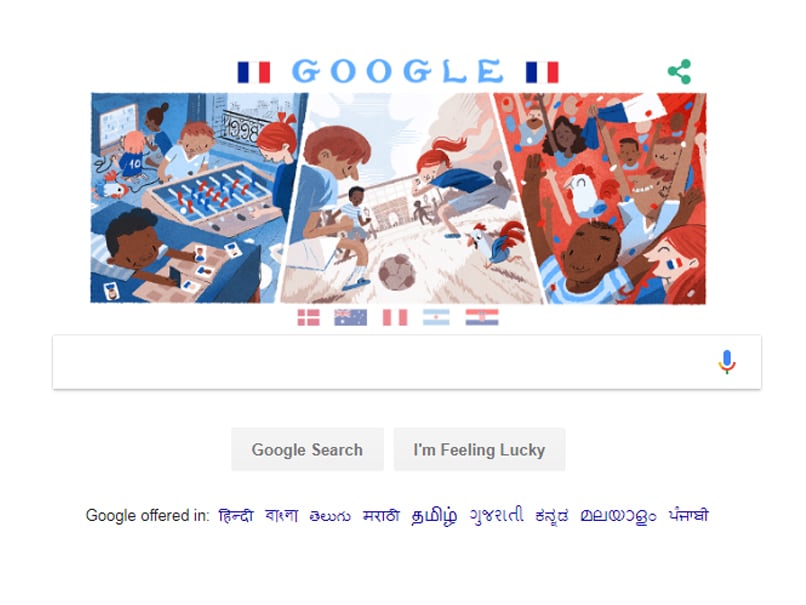 Denmark will take on Australia at Samara Arena.© Google

It's Day 8 of the FIFA World Cup 2018 and search engine Google is back with another Doodle, continuing its series on the 32 participating countries in the mega event and their football culture. Thursday's Doodle features teams from Group C and Group D that will be in action in Russia - Denmark, Australia, France, Peru, Argentina and Croatia. When you click on the doodle, you can slides from one country to the next. Each illustration depicts the footballing culture of their nation and what makes the sport unique for them. In the first match of the day, Denmark will take on Australia at Samara Arena. A gut-wrenching 2-1 defeat to France in their Group C opener has left the Socceroos targeting a win on Thursday as they seek to qualify from the group stages.

After the 05.30 pm match, France will lock horns with Peru at 08:30 pm. The match that will be played at Ekaterinburg Arena is a prime opportunity for the French to stake their claim as the team to beat in Russia.

The last match of the day, that starts at 11.30 pm, features Argentina and Croatia from Group D. Lionel Messi had a penalty saved during his team's tournament-opening 1-1 draw with Iceland.

Argentina's Gaston Pacheco said that football is the most popular sport in their country and the one that people are most passionate about.

Andrea Galecio, the artist from Peru, said that football for them signifies joy with passion. According to Helene Leroux, for the majority in France, football is something that they have in their heart since childhood. It's an opportunity for people to gather to either play or cheer for their team. Football in France will always echo to the World Cup victory of 1998 and the colour blue.

Lionel Messi Samara Arena 2018 FIFA World Cup Football
Get the latest updates on ICC T20 Worldcup 2022 and CWG 2022 check out the Schedule, Live Score and Medals Tally. Like us on Facebook or follow us on Twitter for more sports updates. You can also download the NDTV Cricket app for Android or iOS.