Russia president Vladimir Putin stood happily under an umbrella during the award ceremony after France defeated Croatia 4-2 to lift the 2018 FIFA World Cup title at Luzhniki Stadium in Moscow on Sunday. 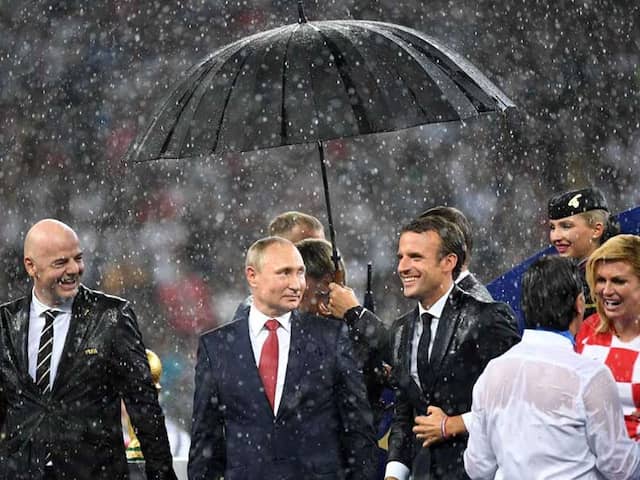 Russia president Vladimir Putin stood happily under an umbrella during the award ceremony after France defeated Croatia 4-2 to lift the 2018 FIFA World Cup title at Luzhniki Stadium in Moscow on Sunday. Putin came prepared with an umbrella, while FIFA President Gianni Infantino, France President Emmanuel Macron and Croatia President Kolinda Grabar-Kitarovic got soaked in the rain during the award ceremony. After the final whistle, Macron and Kolinda found themselves on the pitch at the Luzhniki Stadium without an umbrella during a fierce downpour that started during the trophy presentation -- unlike Putin who was sheltered by an aide. Twitterati were quick to spot the Russian President Putin and started trolling him.

Putin the only one with an umbrella. ... pic.twitter.com/MLQNqThhBl

Putin said Russia could be "proud" of its hosting of the football World Cup, judging it a success "in every respect" after Sunday's final.

"We can surely be proud of how we organised this tournament," Putin said in televised comments after France's victory against Croatia.

"We have made this grand event a success in every respect," he added.

"We have done it for our supporters, for Russians who are passionate about sport and for all those who love sport across the world."

Putin thanked the foreign fans who came to Russia for the tournament.

Croatia 2018 FIFA World Cup France vs Croatia, Final Football
Get the latest Cricket news, check out the India cricket schedule, Cricket live score . Like us on Facebook or follow us on Twitter for more sports updates. You can also download the NDTV Cricket app for Android or iOS.