Argentina lost 3-4 to France in the first Round of 16 match of the tournament. Teenage star Kylian Mbappe struck twice and took the match away from Lionel Messi-led side. 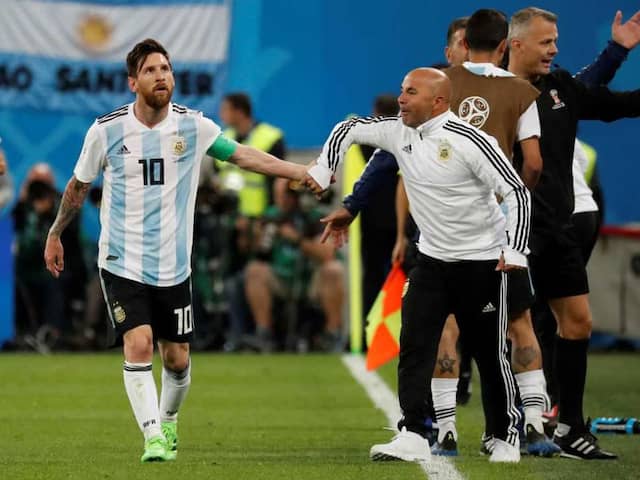 Lionel Messi scored only one goal in the four matches of the World Cup.© Reuters

Argentina suffered a heart-breaking 3-4 loss to France and got knocked out of the FIFA World Cup 2018 on Saturday. Along with a million of fans, Lionel Messi an co. were left gutted after the defeat. As the team headed back after going down against the French, Jorge Sampaoli ruled out stepping down from his position of Argentina's head coach. "Beyond the pain, you need to have courage. The fact I'm here, where I wanted to be, I'm not thinking about" the possibility of resigning, Sampaoli told reporters. The 58-year-old said that it was too early to analyse his team's mistakes, adding that it was a "part of football" to "face a team that was very fast in its transitions" from defence to offense.

"There will surely be different factors to analyze that have to do not only with whether you won or lost," Sampaoli said on Saturday.

The coach recalled that Argentina briefly had the lead early in the second half but that the 2-2 equaliser came "on a play that's very difficult to explain". Sampaoli was referring to a 57th minute goal in which a cross from the left side went past seven players to defender Benjamin Pavard, who scored his first-ever goal for Les Bleus on a rocket half-volley from just outside the penalty box.

Argentina lost 3-4 to France in the first Round 16 match of the tournament. Teenage star Kylian Mbappe struck twice and took the match away from Messi-led side.

In the second match of the Round of 16, Uruguay defeated Cristiano Ronaldo's Portugal 2-1 to reach the quarterfinals of the World Cup. Edinson Cavani scored twice (7th and 62nd minute) in the match.

Lionel Messi Kylian Mbappe 2018 FIFA World Cup France vs Argentina, Round of 16 Kazan Arena
Get the latest Cricket news, check out the India cricket schedule, Cricket live score . Like us on Facebook or follow us on Twitter for more sports updates. You can also download the NDTV Cricket app for Android or iOS.