FIFA World Cup 2018, Highlights, Brazil vs Mexico: Neymar and Roberto Firmino scored in the 51st and 88th minute respectively to help Brazil qualify for the quarter-finals of the World Cup. 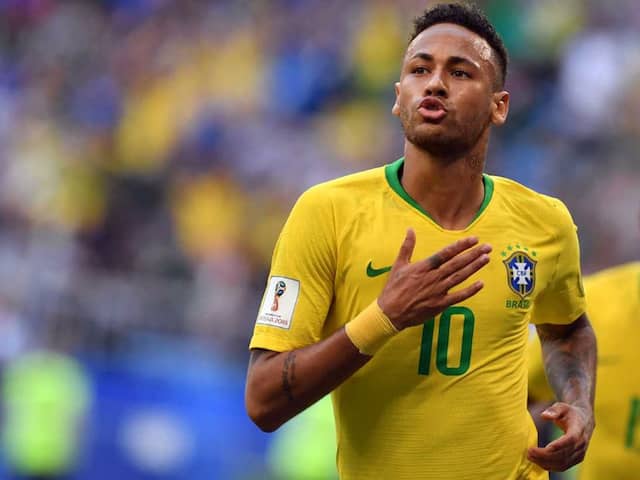 Brazil roared in the World Cup quarter-finals with a 2-0 victory over Mexico on Monday as Neymar shone with a goal and an assist that dumped the central Americans out at the last 16 stage for the seventh straight occasion. The PSG forward slid home in the second half and then teed up Roberto Firmino late on as the five-times champions beat an otherwise stubborn Mexico, whose World Cup began with such promise with a victory over champions Germany, but ended in familiar fashion in the first knockout round. It was the seventh World Cup running that Brazil have reached the last eight, where they will now face Belgium or Japan, while Mexico have not made it to that stage since they hosted the tournament in 1986. Mexico, who enjoyed an enviable recent record against Brazil having won seven of their previous 15 matches against them, were a threat on the counter in the first half but then faded without ever really being put to the sword..(Highlights: Brazil vs Mexico)

21:30 IST: Thank you for joining us on our coverage of the Round 16 match between Brazil and Mexico.

#BRA get the job done!

Second-half goals from @neymarjr and Roberto Firmino mean that @CBF_Futebol are through to the quarter-finals! #BRAMEX pic.twitter.com/LHBtM2Ajbw

21:22 IST: Whistle! It's all over. Brazil are through! Neymar and Roberto Firmino are the two scorers for the day.

And it looks like #BRA are on their way to the quarter-finals!

20:56 IST: Neymar is Down! Looks in excruciating pain.

20:53 IST: That should have been 2-0 in favour of Brazil but Neymar misses! Willian ran brilliantly with the ball but Neymar just could not provide the finish. Brazil 1-0 Mexico

20:50 IST: Hirving Lozano with the cross but there is no one to collect it.

20:49 IST: Willian with a cracker of a shot but saved brilliantly by the goalkeeper

20:44 IST: Do not count Mexico out yet! Carlos Vela with brilliant shot but equally well saved by the Brazilian goalkeeper.

20:44 IST: Ohh No!!! That could have been 2-0 for Brazil. Paulinho shot saved brilliantly by the Mexican goalkeeper. Brazil 1-0 Mexico

20:41 IST: Neymar looking for goal number 2 but the ball goes over the post. Mexico struggling at the moment. Brazil 1-0 Mexico

20:36 IST: GOAL! 51st minute! Neymar scores the first goal for Brazil in the match. Willian with the cross and Neymar scores with a slide. Brazil 1-0 Mexico

#BRA GOAL! @neymarjr's scores his second #WorldCup goal of 2018 to give Brazil the lead!#BRAMEX 1-0 pic.twitter.com/vgHa9Eefzc

20:35 IST: Jesus Gallardo with an ambitious curling kick but misses!

20:33 IST: Philippe Coutinho with quick powerful kick but brilliant save from Mexican goalkeeper.

20:31 IST: Substitution for Mexico as second half begins. M. Layun comes in to replace Marquez

20:31 IST: Whistle from the referee! Second half begins! Brazil 0-0 Mexico

For the 20th time this #WorldCup it is 0-0 at HT, but only one match also finished 0-0: #DENFRA in group stage

In short? Still a good chance of goals in the second half!#BRAMEX pic.twitter.com/8NxkabNuLt

For the first time in the knock-out stages of this #WorldCup it is 0-0 at half-time...#BRAMEX pic.twitter.com/kJyDArLJhL

20:13 IST: Filipe Luis booked by the referee for an ugly tackle. Mexico with a free kick! Offside!

20:10 IST: 40 minutes are up! Both teams still goalless but Mexico are living dangerously. Brazil has been on the top in last 15 minutes.

20:08 IST: Neymar with the free kick but the ball is too high and wide

20:07 IST: Neymar is Down! Edson Alvarez booked by the referee for a horrendous tackle. First yellow card of the match.

20:05 IST: Fagner with an ugly tackle at the centre of the pitch. Free kick for Mexico.

20:04 IST: Willian with the corner but cleared easily by the Mexican defenders.

20:02 IST: Gabriel Jesus with the strike but saved by the Mexican goalkeeper.

20:00 IST: 30 minutes are up! Both teams looking equally aggressive now but Brazil just seems to have the edge.

19:59 IST: Edson Alvarez with a brilliant tackle! Super save from him

19:54 IST: Philippe Coutinho shoots but the ball goes over the goalpost. Brazill are looking in rhythm now.

19:51 IST: Hector Herrera was looking dangerous there inside the Brazilian box but defenders yet again win the ball back.

19:50 IST: Brazil has 56 percent of possession after 20 minutes but Mexico are looking more aggressive.

19:47 IST: Lozano again in the Brazilian box but yet again fails to get past Brazilian defence.

19:44 IST: Hirving Lozano takes a shot on the post but the ball goes wide.

19:43 IST: Javier Henrnadez asking a lot of questions at the moment. Brilliant run from him

19:36 IST: Both teams have shown brilliant intent in the opening minutes of the game but Mexico have dominated possession.

19:34 IST: Philippe Coutinho in Mexican box but looses the ball to the defender.

19:22 IST: Both teams are at the centre along with the match officials for the national anthems. We are just minutes away from KICKOFF!

19:00 IST: Fact - Brazil have progressed from the (first) group stage for the 13th World Cup in a row, the longest active streak. They now face the team with the second-longest running streak of qualifying for the next round, Mexico, who have reached the Round of 16 seven times in a row.

18:40 IST: Both teams arrived at the Samara Arena a short while back.

Look at the Samara Arena

18:31 IST: Starting XI for both the teams announced! Luis in for Marcelo, Marquez handed first start against Brazil. Marcelo misses out for Brazil, Gabriel Jesus keeps his place.

The teams are in for #BRAMEX! #WorldCup

18:30 IST: Hello and welcome to the live blog of the Round of 16 match between Brazil vs Mexico straight from Samara Arena.

"What greater motivation could you need when we face off against the five-time champions? It's the perfect scene. It's the biggest game of our lives." Mexico's last-16 misfortunes have often come down to the finest of margins. Defeat on penalties to surprise package Bulgaria in 1994 started an inauspicious run. They blew a lead against Germany four years later and against Argentina in 2006. Conceding twice to the Netherlands in the final minutes four years ago hurt more than most defeats, with a controversial penalty awarded for a theatrical Arjen Robben tumble deep into stoppage time sending the Dutch into the last eight. VAR (the video assistant referee) should prevent a repeat of that injustice, but Guardado has warned Italian referee Gianluca Rocchi not to be fooled by any playacting from the world's most expensive player, Neymar. "We all know who Neymar is, but it isn't up to me or my team to judge him, but the referees and FIFA," he said. "Now there's VAR they need to watch his style and know how to manage it."We know he likes to exaggerate fouls, throw himself on the ground a lot, but that's his style of play and the person who needs to stop that is the referee, not us."

A Brazil side finding their stride in Russia after a slow start are arguably the toughest challenge Mexico could have asked for as they were punished for failing to back up victories over Germany and South Korea with defeat to Sweden to finish second in Group F. Under Colombian coach Juan Carlos Osorio, though, Mexico approach every game seeking to impose themselves rather than in fear of the opposition. "We will try to be more offensive-minded and more driven towards winning games rather than just being happy to be there and trying to not get embarrassed or playing not to lose," said Osorio ahead of the tournament.

Mexico Neymar Brazil vs Mexico, Round of 16 2018 FIFA World Cup Football Live Score Live Blogs
Get the latest Cricket news, check out the India cricket schedule, Cricket live score . Like us on Facebook or follow us on Twitter for more sports updates. You can also download the NDTV Cricket app for Android or iOS.