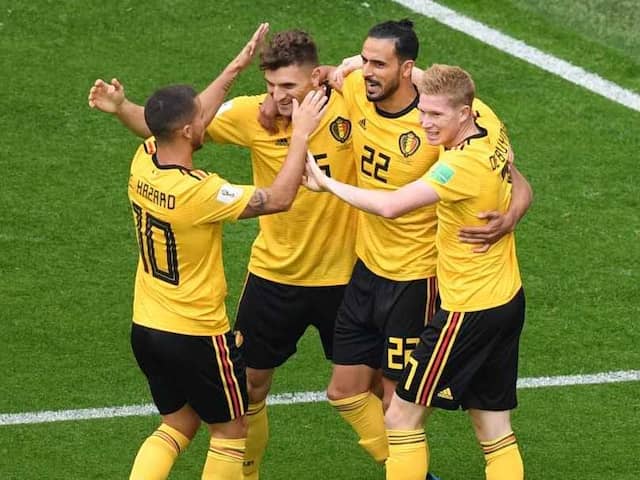 Belgium beat England 2-0 to finish third in the FIFA World Cup 2018 on Saturday. An early Thomas Meunier goal gave Belgium the lead in the first half and Eden Hazard scored the second goal in the 82nd minute. Belgium dominated the game in the first twenty minutes with a host of chances comng their way. England crawled back into the game but there weren't any clear-cut chances for the Three Lions. Belgium were the better side throughout the majority of the match. Thibaut Courtois remained untested in the first half. The closest England came to scoring was in the second half when Marcus Rashford slipped a beautiful pass to Eirc Dier who calmly chipped it over Courtois but only to be cleared fron the goal line by Toby Alderweireld. Hazard finished with a brilliant through-ball played by Kevin De Bryune to erase any England's chance in the closing stages.(Highlights: Belgium vs England)

21:25 IST: Thank you for staying with us for the live match updates.

21:17 IST: Final 2 minutes to go and it seems Belgium will finish third in the World Cup.

21:10 IST: GOAL! 82nd minute. Hazard scores the second goal and it seems that's the final nail in England's coffin in this match. A wonderful-looking through ball by De Bryune and Hazard finishes it with utmost ease. Belgium 2-0 England

21:00 IST: Toby Alderweireld clears it from the goal line as Eric Dier chips over the Belgium keeper. That was the closest England came to a goal-scoring chance. Should have buried it there. 72 minutes gone. Belgium 1-0 England

20:53 IST: Belgium are in complete control of this match. England on the other hand, have been devoid of ideas throughout. Their passing have been lacklustre while Belgium should have doubled their advantage in their early stages of the second half.

20:48 IST: SUBSTITUTION for Belgium. Lukaku comes off for Mertens in the 61st minute.

20:45 IST: England are putting bodies forward but are failing to breach the resolute defence. 57 minutes are up.

20:38 IST: England have made two changes as they've brought on Rashford and Lingard. Their intentions are clear right from the outset. They want to get back into this game as early as possible. Belgium 1-0 England after 50 minutes

#ENG's starting line-up has an average age of 25 years and 174 days, their youngest starting XI in #WorldCup history#BELENG // #WorldCup pic.twitter.com/jy9BZnn5ye

20:15 IST: We are approaching the halftime whistle soon.

20:10 IST: If Belgium beat England today they would go back home with six wins to their name in Russia, a real achievement considering their previous best at a World Cup was four that was achieved four years ago in Brazil. Final 5 minutes of the first half to play.

20:06 IST: Nacer Chadli is clutching his hamstring and it doesn't look good. Thomas Vermaelen is warming up and he comes in for Chadli. Belgium 1-0 England after 37 minutes

20:00 IST: England are growing into this game and the physical presence of Ruben Loftus-Cheek and Eric Dier in midfield is helping keep Belgium in control while chances are created. Belgium 1-0 England after 31 minutes

19:55 IST: CHANCE FOR ENGLAND! Harry Kane had a chance to score in the 24th minute but the shot goes wide off the goal. England seem to be devoid of attacking chances.

19:50 IST: England look scrappy in defence and are still working out how to contain Belgium's slick passing in dangerous areas. Belgium have been the better side so far with the better chances. Belgium 1-0 England after 20 minutes

19:45 IST: Fabian Delph tries his luck from distance for England but there is no power in his shot to trouble the Belgian keeper.

19:40 IST: England trying to stitch together passes but Belgium still remain in control after that early goal. Belgium 1-0 England after 8 minutes

19:36 IST: GOAL! 4th minute and Belgium lead England. Nacer Chadli crosses to Thomas Meunier, who makes no mistake in a rather simple finish.

19:27 IST: The National Anthems of both teams are being played.

19:24 IST: The players are out in the tunnel and are ready to walk towards the pitch.

19:22 IST: TRIVIA! Belgium and England are the first teams to face each other twice at the same World Cup since Brazil beat Turkey 2-1 in the group stage and 1-0 in the semi-finals at Korea/Japan 2002.

19:15 IST: We are now fifteen minutes away from the kick off.

19:05 IST: Harry Kane and Romelu Lukaku are in contention for the Golden Boot.

These two are leading the race for the adidas Golden Boot Award! #BELENG // #WorldCup pic.twitter.com/hokyEQaH3e

18:52 IST: England manager Gareth Southgate has made five changes to the side which defeated both Colombia and Sweden yet lost in the semi-final to Croatia, introducing Phil Jones in defence, wing-back Danny Rose and Fabian Delph, Eric Dier and Ruben Loftus-Cheek into midfield.

17:45 IST: Hello and welcome to the live match updates of the third-place play-off clash between England and Belgium.

For Belgium and their "golden generation", many of the key players should return for the 2022 World Cup, even if Vincent Kompany and Jan Vertonghen will probably be gone by then. Martinez, who signed an extension until after Euro 2020 in May, can guide Belgium to the nation's best result at the World Cup. They finished fourth in 1986. "We want to finish on a high and these players deserve to finish on a high," said the Spaniard. "You need to try to see the opportunity of finishing third at the World Cup. That doesn't happen too often, so we need to understand that this is an important game.

European teams have claimed third place at the past nine World Cups. The Netherlands beat Brazil 3-0 in 2014 after the hosts were embarrassed 7-1 by Germany in the semi-finals.

Belgium Belgium vs England, 3rd Place Playoff 2018 FIFA World Cup Live Blogs Football
Get the latest updates on IPL 2020, check out the IPL Schedule for 2020 and Indian Premier League (IPL) Cricket live score . Like us on Facebook or follow us on Twitter for more sports updates. You can also download the NDTV Cricket app for Android or iOS.