MS Dhoni's Indian team held their nerve to seal a thrilling three-run win in the final Twenty20 International against Zimbabwe as they clinched the series 2-1. 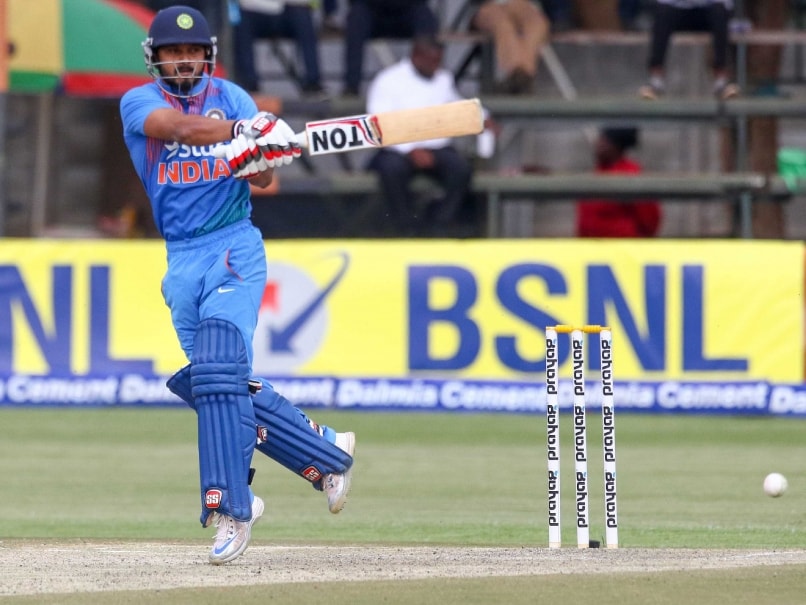 India survived a mighty last-ball scare before clinching the T20 series 2-1 with a nervy three-run victory over a spirited Zimbabwe in the third and final Twenty20 International in Harare on Wednesday.

The series decider went right down to the last ball after Zimbabwe restricted India to 138 for six and got close to the target before ending at 135 for six. Earlier, Kedar Jadhav bailed India out of trouble with a timely 58 off 42 balls.

Zimbabwe, needing 21 runs off the final over, were in touching distance of a famous series win until Barinder Sran held his nerve for a dramatic finish to the game.

Elton Chigumbura (16) and Timycen Maruma (23 not out) almost pulled off the chase in the final over as Sran conceded a six off the first ball, followed by two fours including one on a no-ball.

A four was needed off the final ball but Chigumbura ended up hitting a low full straight into the hands of Yuzvendra Chahal at cover, triggering wild celebrations by the away side.

The second-string Indian team had to work a lot harder in the T20 series in comparison to three ODIs where they blanked Zimbabwe easily.

The home team made a confident start to the run chase, reaching 40 for one in the first six overs.

After the early departure of Chamu Chibhabha, the experienced duo of Vusi Sibanda (28) and Hamilton Masakadza (15) looked comfortable against the Indian pace attack.

Sibanda came out with an aggressive intent and put pressure on the bowlers especially Dhawal Kulkarni, who was hammered for three consecutive boundaries in his second over.

Sran, who ended with figures of 4/10 on his T20 debut on Monday, was not at his best today even though he provided the first breakthrough and held his nerve in the final over.

The hosts looked threatening with Sibanda in the middle but his and Masakadza's fall in quick succession turned the match in favour of India.

Masakadza was adjudged lbw after attempting a sweep off left-arm spinner Axar Patel before Kulkarni trapped Sibanda in front of the stumps.

Peter Moor got into the act after Sibanda's dismissal, punishing a wayward Chahal for three sixes. Chahal offered a couple of long hops and Moor was quick to deposit them into the stands over mid wicket.

The leggie finally removed Moor but the target was very much within reach as Zimbabwe needed 51 off the last 36 balls.

However, two tight overs by Jaspirt Bumrah and Patel made life tougher for the opposition, who had to depend on Malcolm Waller and Chigumbura.

India, batting first for the first time on the tour, had a tough time against the Zimbabwe bowlers on a pitch where scoring freely proved to be difficult, as it was the case earlier in the series.

It was a golden opportunity for the young batsmen to make an impact in a must-win match but some of them ended up squandering it.

Opener Lokesh Rahul was put under pressure in the very first over as pacer Tendai Chatara bowled a rare maiden in this format.

Rahul was tentative at the start but bounced back in Chatara's following over, smashing him for a straight six and a couple of fours. Eventually, he did not last long and neither did his opening partner Mandeep Singh.

Mandeep, who scored 31 and 52 not out in the last two games, was the first one to go back. He tried to cut a short ball over cover but mistimed it to be caught just outside the circle.

Rahul too was out to a lose stroke as he tried to whack Neville Madziva over mid-wicket, only to play on to his stumps.

With Manish Pandey run out after a brilliant direct hit from Elton Chigumbura, India were struggling at 29 for three in six overs.

Jadhav and Ambati Rayudu (20) were left to do the repair job and they took the innings forward with a 49-run stand off as many balls.

Barring Jadhav, the Indian batsmen could not find the big hits that were needed in the middle overs.

Captain M S Dhoni, who failed to get his team over the line in opening T20, was bowled by Donald Tiripano after making 9 off 14 balls.

It was a rather unusual dismissal as Dhoni, clearing his front foot for a big one, got an inside edge on to his stumps and one of the flying bails sneaked into his helmet to hit him on the right eye.

Jadhav held his end to reach his maiden half century and his innings was laced with seven fours and a six.

Dhoni did not get going with the bat but added another feather to his illustrious cap when he walked out for the toss.

By playing this game, he equalled Ricky Ponting's record of captaining in 324 international matches to be at the top of the list alongside the Australian.

Comments
Topics mentioned in this article
Zimbabwe Cricket Team India Cricket Team Kedar Jadhav MS Dhoni Graeme Cremer Harare Sports Club, Harare Zimbabwe vs India 2016 Cricket
Get the latest updates on IPL Auction 2023 and check out  IPL 2023 and Live Cricket Score. Like us on Facebook or follow us on Twitter for more sports updates. You can also download the NDTV Cricket app for Android or iOS.