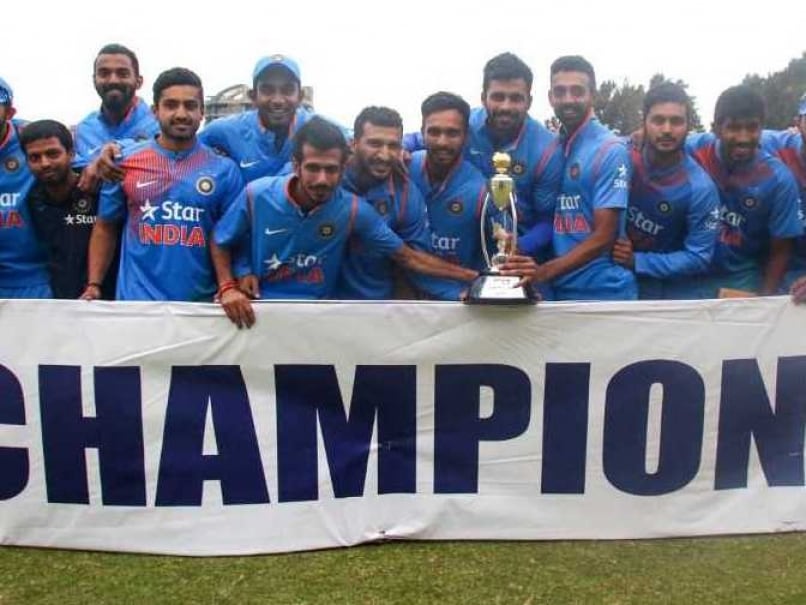 Barinder Sran finished as Man of the Series in the three-match T20 international series between India and Zimbabwe. Sran took six wickets in two matches and bagged the final wicket of the series that handed India a 2-1 series win in a tantalizing finish at Harare. Mahendra Singh Dhoni is pretty impressed with his young pacers.

In a post-match chat, Dhoni admitted that India gained more in the T20 series than the ODIs whichIndia strolled to a 3-0 win. Sran (10 wickets in five games vs Zimbabwe) was well supported by young Jasprit Bumrah, who finished with 14 wickets - five in T20s series -- in five matches.

"We now have a pool of fast bowlers... we can proudly say that we have 10-12 bowlers for limited overs cricket who can slowly graduate to the Test level," Dhoni said.

Dhoni said India always stood a better change in a longer game and Wednesday's tight finish was not unexpected. "Zimbabwe did well. They need more games to get better," the Indian captain said.

Sran bowled a nervy final over at the Harare Sports Club. Zimbabwe needed 21 in the last six balls and Sran was smashed for a six and a four by Timysen Maruma to push India into a corner.

Sran bowled the widish yorker well and two dot balls put the Zimbabweans under pressure. Given their lack of experience, eight runs from two balls was always going to be tough but Elton Chigumbura changed it to 4 from one ball.

The 23-year-old Punjab lad had the last laugh as Chigumbura hit a low Sran full-toss straight to cover.

"To get 21 runs in the last over was always going to be difficult. I had the confidence to defend it. But after I got hit, I changed my plan twice and that helped," Sran said.

Comments
Topics mentioned in this article
India Cricket Team Zimbabwe Cricket Team MS Dhoni Barinder Sran Dhawal Kulkarni Jasprit Bumrah Zimbabwe vs India 2016 Cricket
Get the latest updates on IPL Auction 2023 and check out  IPL 2023 and Live Cricket Score. Like us on Facebook or follow us on Twitter for more sports updates. You can also download the NDTV Cricket app for Android or iOS.