Excellent display of bowling from the likes of Yuzvendra Chahal, Barinder Sran and Dhawal Kulkarni followed by gritty knocks from the top three batsmen guided India to a series win over Zimbabwe at the Harare Sports Club. Catch all the highlights of this match here

After being put in to bat, Zimbabwe got off to a worst possible start as they lost three wickets inside powerplay courtesy some brilliant bowling from Barinder Sran and Dhawal Kulkarni. Vusi Sibanda and Sikandar Raza then stretched together a 67-run partnership for the fourth wicket but India bowlers - led by Yuzvendra Chahal - wrecked havoc, as they took six wickets for just 20 runs to bowl out Zimbabwe for a below-par score. In reply, the trio of KL Rahul, Karun Nair and Ambati Rayudu played sensibly and guided the visitors to an eight-wicket win and also take an unassailable 2-0 lead in the three-match series. Catch all the highlights of this match here (SCORECARD | NEWS)

18:10 hrs IST: That's it. Thank you for joining us today. See you all on Wednesday for the last match of the series. Until then, it's goodbye, Cheers!Â

Yuzvendra Chahal (Man of the Match): "I enjoyed bowling, the wicket was a bit slow. Day before the batsmen were not going after me and were a bit defensive, today they were attacking me so I got wickets. I was looking to bowl a stump-to-stump line and Mahi bhai also asked me to bowl slow through the air."

MS Dhoni (India's skipper): "It's always good to take catches and inside edges are always good to take. It was a different performance from the first game, slightly different pitch. Some of the shots played in the first 10 overs showed it was coming on to the bat nicely. Our bowlers did a great job to restrict them, I felt they would cross 200 and our spinners got us important breakthroughs."

Graeme Cremer (Zimbabwe's skipper): "Losing the toss again may have played a part but our batters didn't look the part. The wicket was still doing a little bit and we were looking to get around 240 to get them under pressure. Injuries are always disappointing but I think we had enough batters to post a good score."

17:42 hrs IST: FOUR! And that's it. Manish Pandey finishes it in style. India beat Zimbabwe by eight wickets to take an unassailable 2-0 lead in the series.

17:07 hrs IST: Meanwhile, the third Test between England and Sri Lanka at Lord'sÂ has reached the last day and early lunch has been taken due to a rain delay.Â

16:59 hrs IST: FOUR! Fuller delivery from Chatara and Rayudu drives it down the ground for his first boundary of the day.Â

16:40 hrs IST: Welcome back. We're just few minutes away from the resumption of India's innings.Â

15:38 hrs IST: Zimbabwe have tightened things up in the last two overs. Just one run scored by both Indian openers.Â

15:17 hrs IST: FOUR! Too short from Chatara, Nair gets into position and pulls it well to deep mid-wicket for a four. India are 13/0 in 3 overs.Â

15:14 hrs IST: FOUR! Another wide delivery from Muzarabani and Rahul cuts it hard past the fielder at point for his first boundary. India are 9/0 after 2 overs.Â

15:11 hrs IST: 1.2 overs: Wide delivery from Muzarabani and Rahul cuts it in the gap between cover and point for three runs.Â

15:09 hrs IST: Great start from Chatara. Giving no room at all to Rahul to free his arms. India are 0/0 after first over.Â

15:05 hrs IST: Time for India's innings. KL and Nair to open. Chatara to bowl the first over for Zimbabwe.Â

14:54 hrs IST: OUT! Muzarabani lbw Axar 5(10). And that's the end of Zimbabwe's innings. They finish on just 126. Sean Williams won't bat as he hurt his finger just after the toss and had to go for scans. We'll be back in a few minutes time. Â 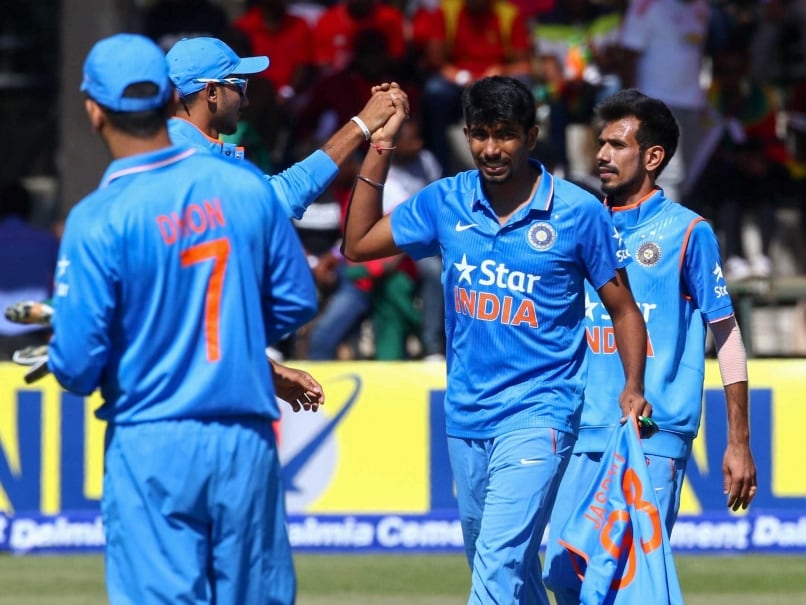 Jasprit Bumrah (R) celebrates with this teammates after getting the wicket of Richmond Mutumbami.

14:05 hrs IST: FOUR! Touch short from Chahal, Sibanda rocks back and pulls it over mid-wicket for his fourth boundary. Zimbabwe are 94/3 in 22 overs.Â

13:56 hrs IST: FOUR! Wide delivery from Bumrah and Raza punches it off back foot towards covers for a four. Zimbabwe are 80/3 after 19 overs.Â

13:52 hrs IST: SIX! Pitched up and Sibanda smashes it over long-on for the first maximum of the match.Â

13:51 hrs IST: Leggie Chahal comes in for his first over.Â

13:45 hrs IST: Bumrah to continue. Partnership building for Zimbabwe. Just what the doctor ordered for them!Â

13:35 hrs IST: 14.1 overs. FOUR! Length delivery from Bumrah and Sibanda whips it over mid-wicket. A couple of bounces before it reaches the boundary. Indeed, a beautiful shot!

13:26 hrs IST: Seven runs in the last two overs. Zimbabwe in desperate need of a partnership. They are 46/3 after 12 overs.Â

13:20 hrs IST: FOUR! Short ball from Sran, Sibanda picks the length and pulls it past the fielder at mid-on for his first boundary. Excellent shot!Â

13:14 hrs IST: 9.3 overs: Outswinger from Kulkarni, Sibanda goes back, uses the pace and finds the gap between cover and point and completes two runs.Â

13:09 hrs IST: 8.1 overs: Short and wide from Sran, Sibanda gets into position and hits it hard past the fielder at point for three runs. Outfield too slow, else it would have gone for a boundary.Â

12:57 hrs IST: Good comeback from Kulkarni. Swings it both ways and troubles Moor on multiple occasions. Zimbabwe are 20/1 after 6 overs.Â

12:52 hrs IST: Kulkarni to continue. Needs to be consistent with his line and length. Peter Moor is the new batsman for Zimbabwe.Â

12:50 hrs IST: OUT!First wicket for Sran. Masakadza tries to play it inside-out but gets a thick edge and Bumrah does the rest at third-man.Zimbabwe are 19/1 after 4.3 overs.Â

12:46 hrs IST:Â FOUR! Masakadza presents the full face of the bat and thumps it in the gap between mid-off and covers. Brilliant shot!Â

12:43 hrs IST: Sran just missing the right length in his second over. Trying to bowl too fast but straying away on almost all deliveries. Zimbabwe are 9/0 after 3 overs.Â

12:36 hrs IST: FOUR! Overpitched delivery from Kulkarni and Chibhabha flicks it to the wide of the fielder at mid-on for his first boundary.Â

12:33 hrs IST: Excellent start from Sran. Right on the money from the first ball. Zimbabwe are 0/0 after first over.Â

12:31 hrs IST: And as expected, some swing on offer for Sran. Troubles Masakadza with a sharp incoming delivery (first).Â

12:29 hrs IST: It's time for action. Chibhabha and Masakadza make their way out in the middle. Sran to start the proceedings for India.Â

#TeamIndia members are warming up ahead of the 2nd ODI #ZIMvIND pic.twitter.com/jT9ULZ5jm9

12:02 hrs IST:It's almost like this match is happening in England! It's freezing cold, very very cloudy.Â

The toss has been delayed by 10 mins. Toss at 8:40 am local #TeamIndia #ZIMvIND pic.twitter.com/FX5gFYNyFo

11:58 hrs IST: On Saturday, three Indian players (Rahul, Nair and Chahal) made their debut. Will any of the likes of Jayant Yadav, Faiz Fazal and Mandeep Singh get a chance today?Â

11:50 hrs IST: SERIES WIN ON THE CARDS: A warm welcome to our live coverage of second ODI between Zimbabwe and India at Harare Sports Club. The Men in Blue look high on confidence after the first win and will look to make it 2-0 today. On the other hand, 'The Chevrons' will have to play out of their skins to stay alive in the series.Â 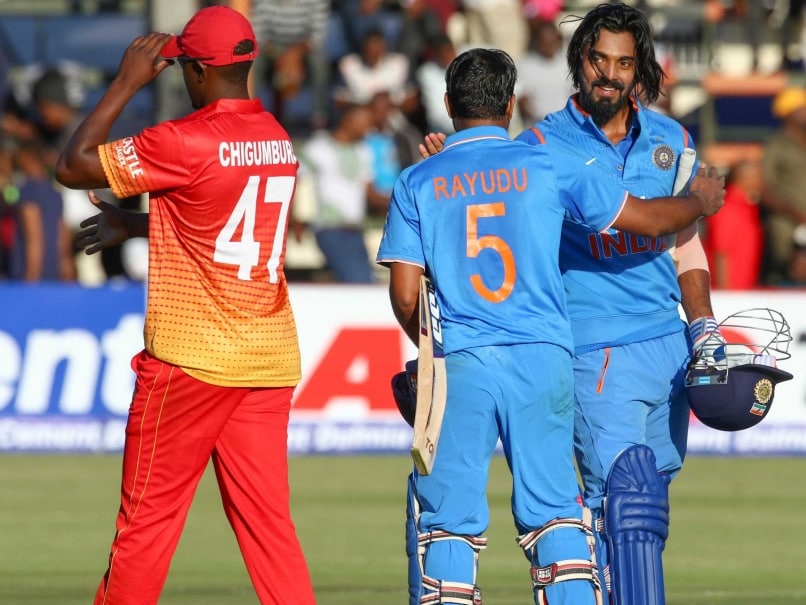 India's youngsters put up a remarkable show in the first ODI, with KL Rahul dominating the show. He became the first Indian batsman to score a century on ODI debut as he continued his good form. The bowlers also did well, with Barinder Sran bowling with good pace and getting swing.

However, Zimbabwe's small total of 168 did not give many batsmen a chance and it will be interesting to see what Dhoni does in the second ODI. Three players made their debuts in the first ODI and there could be some more fresh faces introduced.

For Zimbabwe, a listless batting and bowling display summed up their efforts and it will take a monumental effort if they are to snap their 10-match losing streak against India. Graeme Cremer looked lost for options and some key players will have to stand up if they are to put up a fight.