India lost by two runs to Zimbabwe in the opening T20 match, their first defeat of the tour -- having whitewashed the hosts 3-0 in the preceding ODI series 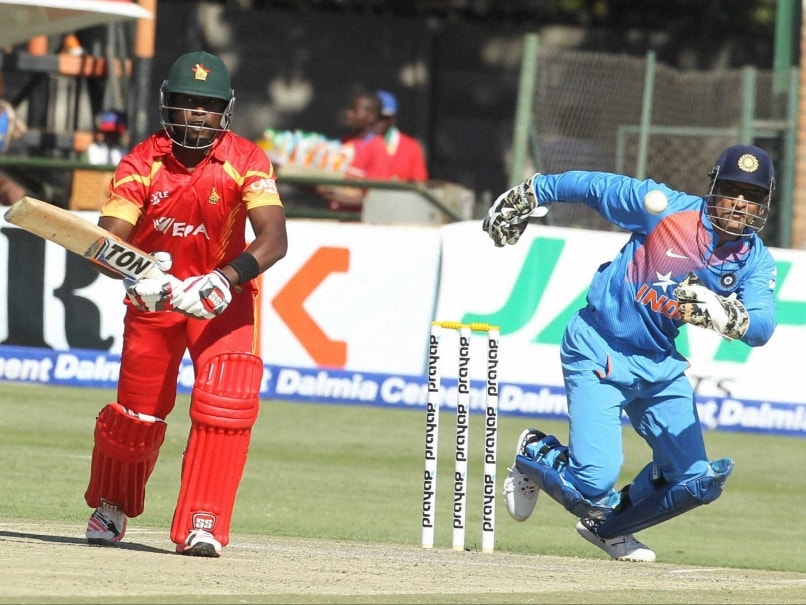 India captain MS Dhoni (right) could make changes to his bowling setup for the second T20 after Elton Chigumbura took them apart in the first T20, smashing an unbeaten 54 off 26 balls.© PTI

Handed a rude shock in the opening game, India will have to raise their game in the second Twenty20 International to stay afloat in the three-match series against minnows Zimbabwe in Harare on Monday.

It was the first time that the Indian youngsters were tested on the tour and faltered at crucial junctures to suffer an unexpected loss.

Captain Mahendra Singh Dhoni failed to get his team over the line in the last over but equally culpable were the batsmen, who got out at key moments after getting starts.

Manish Pandey made a fluent 48 but like debutant Mandeep Singh, he would have loved to carry on and take the side through.

With Dhoni at the other end and India needing eight off the final over, Axar Patel got out to a loose shot to make life tougher for the visitors.

The second string squad was picked to test the team's bench strength and the youngsters had the ideal platform to perform at the back of a resounding series win in the preceding three ODIs. However, they wilted under pressure when challenged for the first time in the series.

While the batsmen did not show composure required at the highest level, the bowlers, who were given opportunity for the first time on the tour, disappointed.

Credit should go to Zimbabwe for their performance after a humiliating loss in the ODIs but they were allowed to play big shots by the erring Indian bowlers to post 170.

All-rounder Rishi Dhawan, representing India for the first time since the Australia tour and making his T20 International debut, put up an ordinary effort leaking 42 runs in four overs.

Pressure was also on pacer Jaydev Unadkat, who was in India colours for the first time in almost three years. Making his debut in the format, Unadkat was not consistent with his line and length and paid the price for it.

It remains to be seen whether he gets another game after ending with figures of 0/43 or Barinder Sran and Dhawal Kulkarni come back to bowl with the new ball, pushing Dhawan out of the eleven too.

Leggie Yuzvendra Chahal, who impressed in ODIs, also had an off day and he would be aiming to bounce back strongly.

Ahead of the must-win game, Dhoni warned his men to not repeat the same mistakes in the remaining games

Though spinner Jayant Yadav was the only one to not get an opportunity in the 16-man squad, Dhoni is expected to get back to his full strength bowling attack.

India did not see the loss coming after a cakewalk in the ODIs, giving Zimbabwe a much-needed morale boost to press for another win.

Their captain Graeme Cremer insisted that more was expected from his team, that pulled itself out of a hole with an all-round effort.

Zimbabwe batting was an abject failure in ODIs but in the shortest format, they showed they had the resources to put up a fight. The top order got some form going and so did the likes of Malcolm Waller in the middle order.

The bowlers also chipped in with timely blows with the stand-out effort coming form 24-year-old pacer Neville Madziva, who stopped Dhoni and co from getting eight runs in the final over.

His last over was praised by Dhoni himself, albeit raising more questions on the famous finishing skills of the Indian captain.

The win was surely a surprise, generating some excitement in the otherwise drab contest.

Another fighting contest will be welcome but beating India again could prove to be a too big a task for the home team.

Comments
Topics mentioned in this article
India Cricket Team Zimbabwe Cricket Team MS Dhoni Zimbabwe vs India 2016 Cricket
Get the latest updates on IPL Auction 2023 and check out  IPL 2023 and Live Cricket Score. Like us on Facebook or follow us on Twitter for more sports updates. You can also download the NDTV Cricket app for Android or iOS.