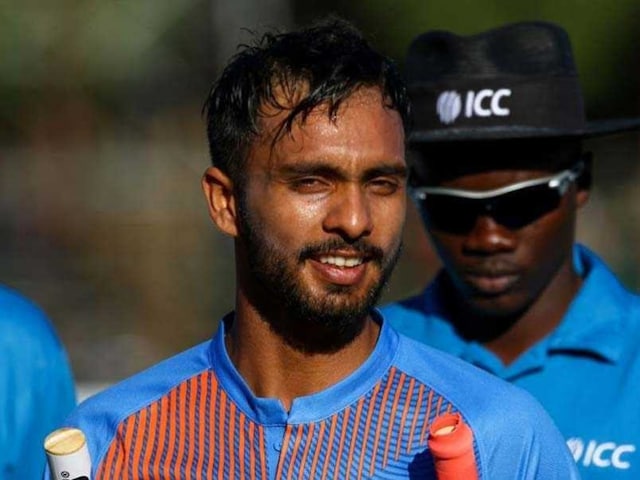 Mandeep Singh smashed 52 not out off 40 balls, including six fours and a six. He added an unbeaten 103-run stand with KL Rahul to take India to an easy victory.© AFP

Indian batsman Mandeep Singh, who struck a half-century in the team's series-levelling win against Zimbabwe in the second T20, said he had a sleepless night before the match owing to pressure, which vanished the moment he stepped on to the field.

Mandeep, who scored an unbeaten 52 in a modest 100-run chase last night, said the anxiety he felt before the match surprisingly disappeared when he came in to bat.

"I had a sleepless night before the match, things like pressure of winning a match or the series play on your mind, and also the fact that the selectors are watching you. Call it pressure or nervousness, whatever you want. But when you go in to bat, it becomes a little easier, at least for me. At that time, I just thought, the target is 100, how do I achieve that.

"Once I'm inside, these things don't bother me, that the selectors are watching, that this series is very important.

"Before the match these things do play on my mind, this series is obviously very important, but honestly, once I go in, it's only, I have to bat, and win the match, and obviously, (things like) reading the wicket, what is the situation. So it's a good thing that I forget (all the pressure) once I'm in," said Mandeep.

After being handed a shocking defeat in the opening Twenty20 International, Mandeep said the Indian team solely focused on the process rather than the result and that helped it level the three-match series 1-1.

"We were thinking to focus on our process rather than thinking too much about the result. Obviously, we want to win the series, but if we always think about winning then it will be like building up pressure. So we were trying to focus on the process," said Mandeep at the post match press conference.

After entering the series on the back of a 3-0 whitewash of Zimbabwe in the preceding ODI series, India suffered a shocking two-run loss against the hosts in the opening T20.

But the visitors were quick to bounce back in the second T20 with a crushing 10-wicket win.

"Obviously that defeat (in the opening T20) was hurting, but we discussed a few points that what we need to do and I think whatever we have discussed in that previous game we implemented.

"We have played five games now on this wicket. We discussed a few points and I think we implemented really well. So that was the main thing," said Mandeep.

The 24-year-old batsman said the Indian players chose to relax on the eve of the second T20, rather than putting additional pressure on themselves.

"A few boys went to see a movie yesterday, we played FIFA, so we had quite a relaxed day, and obviously we discussed quite a lot about the previous game, and I think we played really well today (Monday)," he revealed.

Comments
Topics mentioned in this article
India Cricket Team Zimbabwe Cricket Team Mandeep Singh Zimbabwe vs India 2016 Cricket
Get the latest Cricket news, check out the India cricket schedule, Cricket live score . Like us on Facebook or follow us on Twitter for more sports updates. You can also download the NDTV Cricket app for Android or iOS.