India, who suffered a shock two-run loss in the first T20, got their act together in the second match on Monday and inflicted a crushing defeat on Zimbabwe at the Harare Sports Club 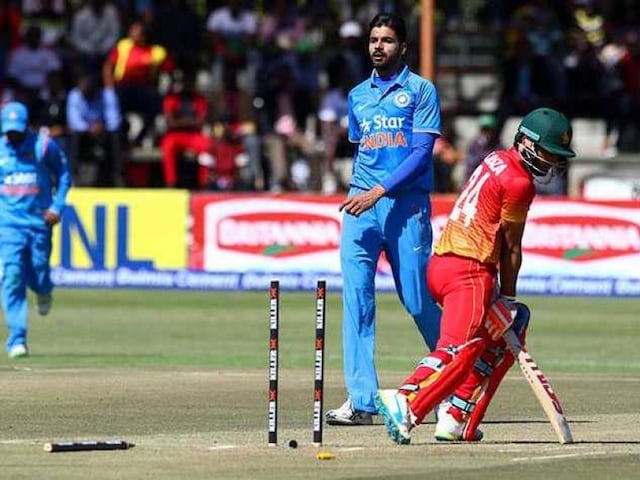 Barinder Sran took four wicket for 10 runs to achieve the best figures by an Indian on debut and will look to again wreak havoc on Zimbabwe in the third and final T20 on Wednesday.© AFP

A rejuvenated India will have their tails up when they lock horns with Zimbabwe, left bruised and battered after a 10-wicket thrashing, in the series-deciding third and final Twenty20 International on Wednesday.

India entered the series on the back of a 3-0 whitewash of Zimbabwe in the preceding ODI series, but suffered a shocking two-run loss to the hosts in the opening T20 last Saturday.

The visitors got their act together in the second game yesterday and inflicted a crushing defeat on Zimbabwe at the Harare Sports Club.

India stayed alive with a win in the second game and would now look to seal the deal in their favour with another convincing victory.

While young seamer Sran returned with the best figures by an Indian on debut, Mandeep struck a fluent half century and Rahul too contributed handsomely to guide the team home with plenty of overs to spare. The knock was Mandeep's maiden half century in this format.

Bumrah was a perfect ally for Sran, picking up three wickets.

Indian youngsters would be gunning for another good outing before heading home.

The team lost its plot a bit in the first game and according to Mandeep, it stuck to basics in the second T20, and the result was there for all to see.

India will take confidence from the fact that this was their first 10-wicket win in a T20 international.

The experienced campaigner that he is, Dhoni would, however, not be taking the beleaguered hosts lightly.

Comments
Topics mentioned in this article
India Cricket Team Zimbabwe Cricket Team MS Dhoni Jasprit Bumrah Mandeep Singh Lokesh Rahul Zimbabwe vs India 2016 Cricket
Get the latest Cricket news, check out the India cricket schedule, Cricket live score . Like us on Facebook or follow us on Twitter for more sports updates. You can also download the NDTV Cricket app for Android or iOS.