Don't Have to Make Mistakes to Learn: MS Dhoni Tells His Team

Elton Chigumbura's blistering fifty helped Zimbabwe score 170/6. In reply, India lost wickets at regular intervals and were restricted to 168/6 in the first of the three T20s 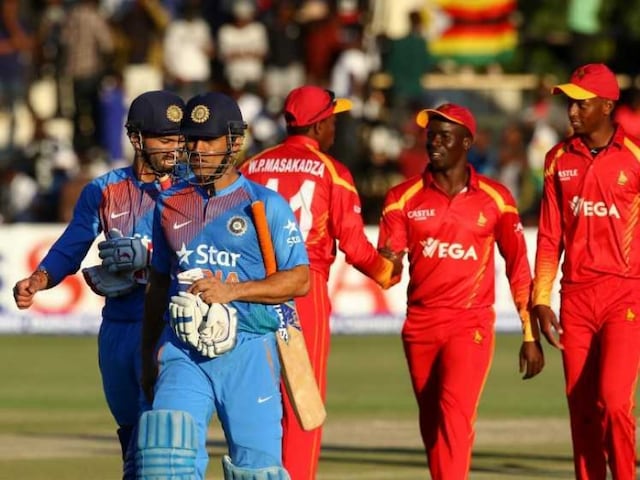 MS Dhoni failed to get his team over the line as India failed to score eight runs off the final over with pacer Neville Madziva holding his nerve.© AFP

India captain Mahendra Singh Dhoni hoped the youngsters in the squad learn from their mistakes after a shock loss to Zimbabwe in the opening T20 International on Saturday.

The inexperienced Indian batting lineup thew their wickets away at crucial junctures as the visitors ended up losing the game by two runs for their first defeat of the tour.

"I feel, though we lost the game - it is disappointing - it is still a learning curve for the youngsters, provided they are learning out of it," said Dhoni.

"You have to take it in a serious manner because whenever you will represent the country, whenever they get a chance to be part of the proper Indian team for a consistent period of time, they will feel the pressure. That will be the time when a game like this or a tour like this will really help them ease out that pressure," he said.

The captain himself failed to get his team over the line as India failed to score eight runs off the final over with pacer Neville Madziva holding his nerve.

He said he should have completed the job but expected a more sensible approach from his batsmen.

"I felt the batsmen will have to take the responsibility. The reason being, few of them, they were set, they were batting well. When you are chasing targets, you need to take it to the end and then look to play the shots. That was something that was lacking in this game," Dhoni pointed out.

The second string squad for the tour was picked in the absence of seniors and Dhoni said the rookie players must make most of the opportunity. The skipper said he batted at six to give others more time in the middle.

"It is not for me. If I had to bat up, I could easily bat at four for this team. But what is important is for these youngsters to bat at that number because this is an opportunity for them. The only reason I am here is to understand them and at the same time guide them as to what has to be done."

He also said international cricket is different to IPL and there is little room for error.

"Let's talk about IPL, it doesn't really matter. You can play your big shots. There is no pressure of result. You say 'okay, in 14 games if you play five or six innings, you will take the team through.' Over here it is slightly different. This is where you have to personally tell them as to 'this could have been done at that point of time.' And also that's how you learn. It is not that you have to commit a mistake to learn."

The loss was a rude shock for the team that steamrolled Zimbabwe in the three-match ODI series. Dhoni said the result proves every international team needs to be respected.

"It doesn't matter which team you are playing. It is a levelling experience. What I mean by that is you need to give a lot of respect to cricket and when you go in to bat or bowl in the field, irrespective of the opposition, you have to be at your best.

"You can't play with your reputation or playing eleven that looks good on paper. What is important is how well you play on the field, how well you are executing. It is the cricket that wins you the games, not the teams. I felt we were way off today, both in the bowling and the batting department," he added.

Comments
Topics mentioned in this article
India Cricket Team Zimbabwe Cricket Team MS Dhoni Zimbabwe vs India 2016 Cricket
Get the latest Cricket news, check out the India cricket schedule, Cricket live score . Like us on Facebook or follow us on Twitter for more sports updates. You can also download the NDTV Cricket app for Android or iOS.