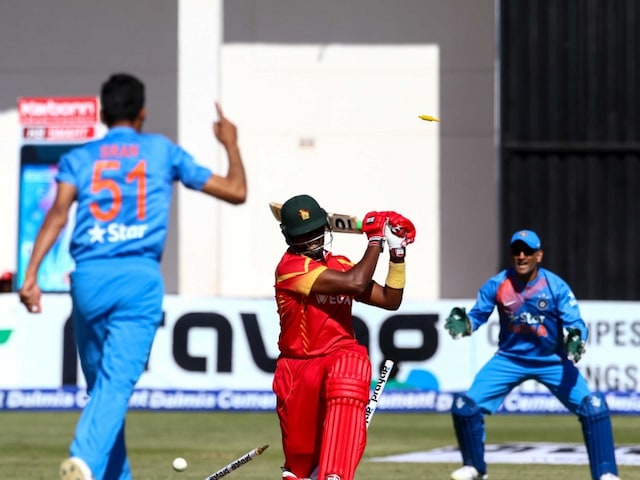 Barinder Sran finished with 4/10, the best figures by an Indian bowler on debut as India thrashed Zimbabwe by 10 wickets in Harare.© AFP

India rode on young seamer Barinder Sran's memorable debut performance to notch up a crushing 10-wicket victory over Zimbabwe in the second Twenty20 International and level the three-match series 1-1 in Harare on Monday.

Asked to bowl after the coin landed in favour of Zimbabwe skipper Graeme Cremer, a determined India restricted the hosts to 99 for nine in the stipulated 20 overs with Sran returning the best figures by an Indian debutant in T20 format, to lay the foundation at the Harare Sports Club.

Mandeep Singh (52*) and KL Rahul (47*) then led the way with unbeaten knocks as the visitors chased down the target with 41 balls to spare.

This was India's first 10-wicket win in this format.

Sran (4/10) was ably assisted by Jasprit Bumrah, who picked up three wickets for 11 runs in his quota of four overs.

Sran finished with excellent figures in his quota of four overs, which is the second best globally. Before Sran, Pragyan Ojha (4/21) against Bangladesh in 2009 World T20, held the Indian record.

The duo of Sran and Bumrah picked up seven wickets between them while giving away just 21 runs in eight economical overs.

Owing to the pace duo's efforts, India staged a strong fightback after a shocking two-run loss in the opening T20 International of the three-match series at the same venue.

Bangladesh's Elias Sunny (5/13) holds the record for the best bowling figures by a debutant in T20 Internationals.

Chasing a meagre total, India were off to a flying start with openers Rahul and Mandeep hardly facing any trouble against a mediocre Zimbabwean bowling attack.

While Mandeep smashed six fours and a six, Rahul found the fence two times and also cleared it twice, as India made short work of the chase.

Zimbabwe struggled not just with the bat and ball, but in the field too as Mandeep was dropped on 23.

As Mandeep pulled Chamu Chibhabha's short delivery straight to the deep square leg fielder, the ball bounced off his hands and landed on the other side of the rope for a six.

Mandeep sealed the issue for India when he cut Neville Madziva for a boundary in the first delivery of the 14th over.

Earlier, opting to bat after winning the toss, Zimbabwe were pushed on to the backfoot from the word go as Sran along with Bumrah picked up wickets at regular intervals to run through the fragile batting line-up.

Playing the game in place of Richmond Mutumbani, Peter Moor (31) top-scored for the hapless hosts with the help of two boundaries and a six. As he tried to put up some kind of a fight, Moor's innings ended when he was caught by Axar Patel off the bowling of Bumrah.

India had the day's first breakthrough when 23-year-old Sran sent back Chamu Chibhabha (10) with an excellent change of pace in the third over. Two overs later, the young left-arm pacer from Sirsa, Haryana struck again as he uprooted Hamilton Masakadza's (10) middle stump with a ball that had a hint of inward movement.

Sran continued to torment the home side as he had Sikandar Raza caught at gully by KL Rahul. Tinotenda Mutombodzi's dismissal off the very next ball made it worse for Zimbabwe, who were reeling at 28 for four at that stage, leaving Sran on a hat-trick.

While Sran could not take three wickets off successive balls, Bumrah joined in the party by wiping off the lower-order. Zimbabwe could set up only a modest chase for India, who whitewashed the hosts 3-0 in the preceding ODI series.

There was one wicket each for leg-spinner Yuzvendra Chahal and Dhawal Kulkarni.

Comments
Topics mentioned in this article
India Cricket Team Zimbabwe Cricket Team Jasprit Bumrah Harare Sports Club, Harare Zimbabwe vs India 2016 Cricket
Get the latest Cricket news, check out the India cricket schedule, Cricket live score . Like us on Facebook or follow us on Twitter for more sports updates. You can also download the NDTV Cricket app for Android or iOS.