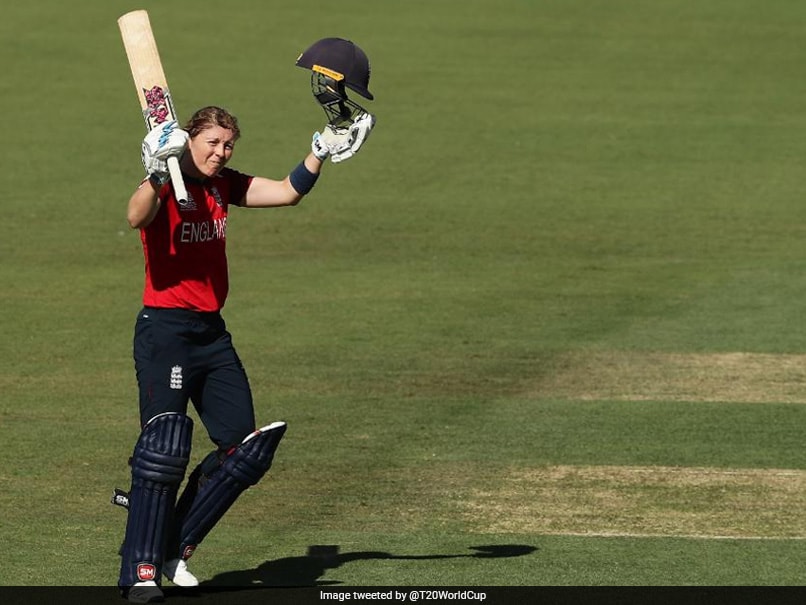 Heather Knight became the first woman cricketer to hit a century in all three formats.© Twitter

Skipper Heather Knightsmashed the first century of the women's Twenty20 World Cup Wednesday as England emphatically got their campaign back on track with a crushing 98-run win over minnows Thailand. England had looked vulnerable as they crashed to a six-wicket defeat against South Africa in their opening Group B game on Sunday, following a shock 10-wicket hammering by Sri Lanka in their final warm-up last week. With only the top two from each of the two five-team groups qualifying for the knockout phase, defeat in Canberra would have left their tournament in tatters.

But Knight hit an unbeaten 108 in a tournament-best 169-run partnership with Natalie Sciver (not out 59) to secure the vital win. England's 176 for two was also the highest score by any team so far.

"We were gutted after the performance the other day so it was very important that we bounced back with a decent performance here, which we did," said Knight.

"Every game is a must-win game for us now. It was a nice start to get on the board today but we have a long way to go in this competition and we've got to keep the momentum going and put in strong performances."

Debutants Thailand, who came through qualifying, have now lost both of their games after an opening seven-wicket defeat to the West Indies.

"It was a challenging game for us today, but we tried our best," said Thai captain Sornnarin Tippoch.

"The nature of T20 is getting runs on the board so we are working on our batting game."

Sornnarin won the toss and opted to bowl and it couldn't have started better with Amy Jones stumped from the second ball of the day.

When Danielle Wyatt went without scoring in the second over, 2009 champions England were reeling at seven for two.

But Knight and Sciver steadied the ship and set about building a big total as Thailand lost their intensity.

Knight brought up her maiden Twenty20 century off 63 balls, with 13 fours and three big sixes.

At the other end, Sciver smacked her second successive half-century as the Thai bowlers took a pounding.

Thailand lost opener Nattaya Boochatham in the first over and despite a breezy 32 from Natthakan Chantam were never in the run chase as England restricted them to 78 for seven.

England face Pakistan next on Friday, while Thailand play South Africa on the same day.

Thailand Women Heather Knight Women's T20 World Cup Cricket
Get the latest updates on Fifa Worldcup 2022 and check out  Fifa World Cup Schedule, Stats and Live Cricket Score. Like us on Facebook or follow us on Twitter for more sports updates. You can also download the NDTV Cricket app for Android or iOS.