Venus storms into Wimbledon fourth round

Five-time champion Venus Williams cruised into the last 16 at Wimbledon with a straight sets victory over Spain's Maria Jose Martinez Sanchez on Friday. 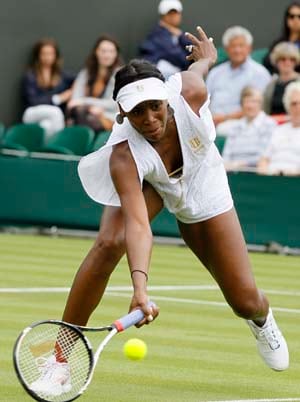 Five-time champion Venus Williams cruised into the last 16 at Wimbledon with a straight sets victory over Spain's Maria Jose Martinez Sanchez on Friday.

The American, seeded 23, sailed through the first set but was given more of a contest in the second as she sealed a 6-0, 6-2 victory in 62 minutes.

The victory sets up a clash against Bulgarian number 32 seed Tsvetana Pironkova, who knocked her out of last year's Wimbledon quarter-finals. It was only Williams' second loss on grass to a player from outside the top 30.

Pironkova is in form, having knocked out second seed Vera Zvonareva, last year's beaten finalist, in the third round.

"I'm feeling good and it's great to be ready for the second week and I've got a couple of days off to get things in order," Williams said.

"Last year I wasn't on my best game but this year I'm going to look forward to playing a bit better than I did last time."

Williams said she had done her homework on Martinez Sanchez.

"I definitely knew how she was going to play. I played her here before on the grass. So I thought my best bet was definitely to make sure I took the net away from her first. It worked out really well.

"I'm in the next round. That's my main goal regardless whether I play amazing, whether I play halfway decent, doesn't matter. It's just about finding a way to win.

"As long as I find a way to win that round, I'm good. So for me it's not about any level."

Williams retired in the third round of the Australian Open with a right hip injury.

The US number two, who rarely pulls out of matches, missed all subsequent events until the Eastbourne Wimbledon warm-up, seeing her drop to world number 30.

However, her ranking bears no relevance to her chances at the All England Club, where her win-loss record now stands at 71-9.

"I feel like I'm moving very well, which is exciting for me, especially after all my injuries. It seems I do move quickly to the net on grass. Hopefully I can get that game going on hard court after this tournament," Williams said.

Martinez Sanchez, the world number 36, hardly got going at all in the first set on Court One, with Williams effortlessly taking the first four games and the Spaniard doing herself no favours with her double faults.

Williams was finally forced into a higher gear when she was taken to a pair of deuces on her serve.

In the following game, Martinez Sanchez pegged back Williams to two deuces again before the American finally won the 27-minute set.

The Spanish number three at last upped her game in the second set, giving Williams a contest before the American broke for a 3-1 lead.

The left-hander was getting much closer in the games but still was no match for her opponent.

Williams reached match point when Martinez Sanchez overshot a lob and won it when the Spaniard fired wide.

Comments
Topics mentioned in this article
Tennis Maria Jose Martinez Sanchez Venus Williams Wimbledon 2011
Get the latest Cricket news, check out the India cricket schedule, Cricket live score . Like us on Facebook or follow us on Twitter for more sports updates. You can also download the NDTV Cricket app for Android or iOS.