The French - Alize Cornet and Jo-Wilfred Tsonga - will face the top-seeded Polish pairing of Agnieszka Radwanska and Grzegorz Panfil in Saturday's final. 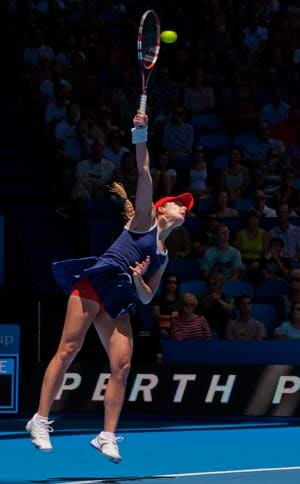 France will play in their third Hopman Cup final after Alize Cornet and Jo-Wilfried Tsonga beat defending champions Spain 3-0 at the mixed teams tournament on Friday.

The French will face the top-seeded Polish pairing of Agnieszka Radwanska and Grzegorz Panfil in Saturday's final.

France previously reached the title decider in Perth in 1998 and 2012.

Two years ago, the team of Richard Gasquet and Marion Bartoli lost the final to the Czech Republic pairing of Tomas Berdych and Petra Kvitova.

In 1998, Mary Pierce and Cedric Pioline were beaten by the Slovak Republic's Karina Habsudova and Karol Kucera.

Cornet, who lost her previous two singles matches this week, put them in front with an easy win over Medina Garrigues, 6-2, 6-2, despite being troubled by hamstring soreness during the second set.

Cornet said the problem was nothing more than early season tightness and, after Tsonga sealed the win for the French with a three-set win over Munoz-De la Nava, she took her place in the dead mixed doubles rubber.

The 23-year-old Cornet, who has lost both her matches on the WTA tour against Radwanska, was thrilled to have the chance to win France's first Hopman Cup title.

While other players have commented they are viewing the unique tournament as little more than Australian Open preparation, Cornet said she was in Perth to win.

"It's good preparation for Sydney and the Australian Open but I think my first goal is of course to win," she said.

"I'm not here to just make preparation to matches and I was very disappointed when I lost to (Sloane) Stephens and Kvitova because I don't want to be the one that loses the team.

"I just want to go until the end and bring back the trophy to France for the first time.

Their opponents in the final, Poland, are making their first appearance at the Hopman Cup.

Tsonga stretched his unbeaten streak in singles in Perth to six matches when he overcame a hiccup in the second set to beat for the 194th-ranked Munoz-De la Nava, who was a late replacement for Tommy Robredo in the tournament.

The world number 10 was blunt about his form lapse.

"I expect to be one of the best players in the world ... I lost my concentration and it was no good.

"When I lost the second set I came back with another mentality and it was a lot better."

The French won the mixed doubles in a pro set, 8-3.

The evening tie, which had no impact on the final, descended into farce as the Czech Republic were handed a 3-0 win over the United States.

Emerging American Sloane Stephens suffered a blow to her Australian Open preparations, retiring from her women's singles clash with Petra Kvitova, citing a wrist injury after dropping the first set, 6-3.

John Isner then forfeited his match against Radek Stepanek due to an ankle injury.

Comments
Topics mentioned in this article
Tennis Rafael Nadal Yanina Wickmayer Caroline Wozniacki Svetlana Kuznetsova Gilles Muller Maria Sharapova Alize Cornet Francesca Schiavone Wimbledon 2011
Get the latest updates on India vs Australia and check out  Schedule, Results and Live Score. Like us on Facebook or follow us on Twitter for more sports updates. You can also download the NDTV Cricket app for Android or iOS.