Wimbledon champion and world number four Andy Murray went down 7-5, 6-3 to 10th-ranked Tsonga on the opening day of the three-day exhibition tournament. 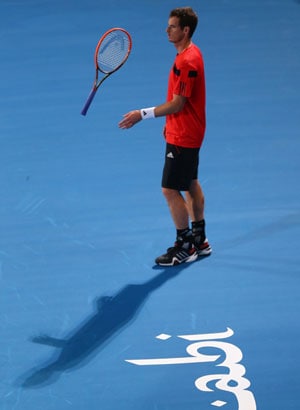 Andy Murray's return to action after a three-month injury lay-off ended in a straight sets defeat to France's Jo-Wilfried Tsonga at the Mudabala World Tennis Championship on Thursday.

The Wimbledon champion and world number four went down 7-5, 6-3 to 10th-ranked Tsonga on the opening day of the three-day exhibition tournament.

"The courts here are very fast and you have to react quickly," said 26-year-old Murray, who underwent back surgery in September.

"Jo was sharper than me today, he served very well.

"It's always good fun here. It's great preparation for the season as you have to play against the best in the world.

"I have played some of my best tennis in the Middle East."

Murray said he was happy with his performance and admitted it will take time to return to peak form.

"I moved well in the first set, especially once I got into the rallies," he told The National newspaper.

"I didn't feel slow at all. In the second I slowed down slightly, but that's something that is going to get better by playing matches. I can't expect to feel great for long periods of matches straightaway.

"But it was a good workout. You want to play your best, but you need to be realistic and patient. I will play better tomorrow than I did today.

"I was hitting the ball OK, moving well for the most part. Moving is the most important thing. I just need to be able to do it for a longer period. I just felt like I hadn't played a match for a while."

Tsonga went into the match with an 8-1 career deficit in competitive matches.

Even though Thursday's clash was an exhibition meeting, the 28-year-old Frenchman was happy to have secured a rare triumph.

"It's not often I take two sets off Andy, even in practice," said the Frenchman who has been plagued in recent months by knee trouble.

"I want to give my best in 2014 and perform better than before."

Comments
Topics mentioned in this article
Tennis Andy Murray Rafael Nadal Wimbledon 2011
Get the latest updates on India vs Australia and check out  Schedule, Results and Live Score. Like us on Facebook or follow us on Twitter for more sports updates. You can also download the NDTV Cricket app for Android or iOS.