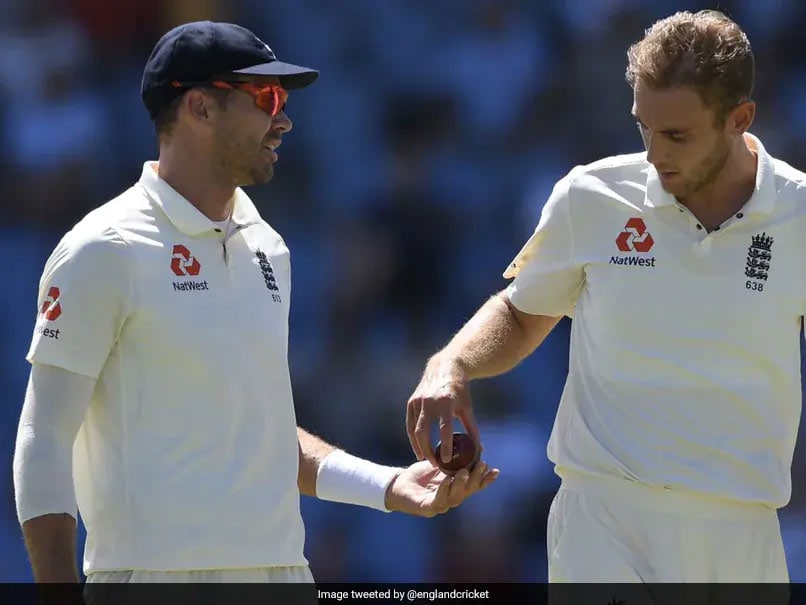 Both Stuart Broad and James Anderson played in the second Ashes Test.© Twitter

There was a lot chatter among fans and experts when England took the field in the first Ashes Test minus James Anderson and Stuart Broad -- 1,156 wickets and over 300 Tests between them. England lost the match by 9 wickets. There was an immediate reaction from the think tank. Both Anderson and Broad returned for the day-night Test in Adelaide but the end result didn't change for England. They ended up losing the match by 275 runs and were left with a tall order of making an unlikely comeback in the remaining three Tests. As England and Australia gear up for the Boxing Day Test, former India wicketkeeper-batter Saba Karim told NDTV that the visitors can't play both of their veteran fast bowlers together. They should instead, try to include someone like a Mark Wood who can exploit the Australian conditions better with his pace and bounce.

"Whatever conditions there were in Brisbane and Adelaide maybe they didn't select the right XI. They need to get more wicket-taking options up their sleeves. I think the biggest difference between Australia and England fast bowlers is speed. The average speed of Australian speedsters is 140-145 but the average speed of England pacers is in the mid or early 130s. On bouncy hard pitches you need bowlers with pace to unsettle the batters," Karim, who is an expert for the Sony Sports Network's Ashes broadcast, told NDTV.

The former India selector said Anderson and Broad do not have the best of records in Australia.

In the 19 matches that Anderson has played in Australia, he has picked up 63 wickets at an average of 34.79 which is considerably higher than his career average of 26. Broad, on the other hand, is no different.

He too has struggled to make a huge impact in Australia picking 36 wickets in his 13 Tests at a high average of 37.88.

"James Anderson and Stuart Broad's performance in Australia for the past several years has not been up to the mark. If you have to play, then pick only one of them and bring someone like a Mark Wood. I think the problem England faces is that they don't really have many options who bowl over 140. Jofra Archer is injured. But you need at least two-three seamers who can bowl at 140-plus regularly on these Australian conditions. Whom do they have in the squad? Again, it's Craig Overton. He's a good bowler but in these conditions, I do have my doubts," Karim added.

Karim, however added that England can make a comeback in the series if they make a few changes to their XI and select bowlers according to the conditions.

"I do expect them to make a comeback but it's going to be a tall order for England.  Believe if they can make some changes in the XI and be more aggressive while batting as well as bowling, they can come back. I think it's important they focus on the Boxing Day Test match for now because if they look too far ahead, that maybe a big problem," he said.

James Anderson The Ashes, 2021/22 Cricket
Get the latest updates on ICC T20 Worldcup 2022, check out the Schedule and Live Score. Like us on Facebook or follow us on Twitter for more sports updates. You can also download the NDTV Cricket app for Android or iOS.