England were reduced to 12/2. Dawid Malan and captain Joe Root battled hard to make sure England suffered no further losses before play was suspended due to bad weather. England were 17 for 2 at stumps on Day 2, trailing Australia by 456 runs. 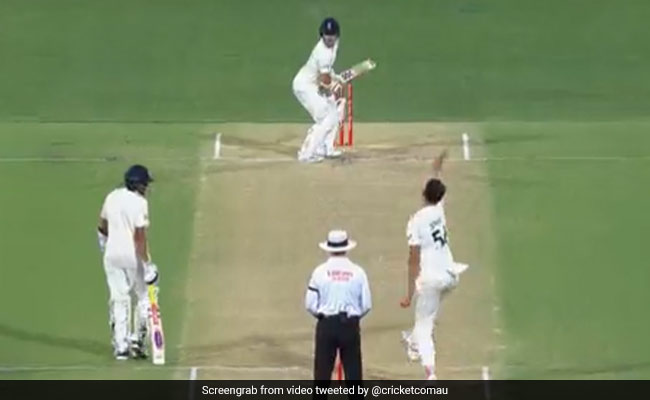 Australia pacers Mitchell Starc, Jhye Richardson and Michael Neser made the pink ball talk to make life difficult for England batters in the final session of Day 2 in the second Ashes Test at the Adelaide Oval in Adelaide. Debutants Richardson and Neser were on the money from the word go with the latter also dismissing Haseeb Hamid to get his maiden Test wicket. But not before the England opener was softened up by a brilliant first over by Richardson, which the right-armer carried on in the next few overs too. Three of Richardson's first four overs were maidens.

The first blood, however, was drawn by the experienced Mitchell Starc. The left-armer, who has a pretty good record with the pink ball, got one to bounce from a good length that got the outside edge of Rory Burns' bat in the third over. The England left-hander's torrid time in Tests continued as he was dismissed for 4.

Mitch Starc is TOO GOOD with the pink ball! #Ashes pic.twitter.com/hMXMMI6j0y

First change Neser then reaped the rewards of some brilliant bowling with the new ball by Starc and Richardson. Neser got his maiden Test wicket off his second ball when Hameed lobbed it straight to Starc at short mid-on while attempting to play a flick shot.

England were reduced to 12/2. Dawid Malan and captain Joe Root battled hard to make sure England suffered no further losses before play was suspended due to bad weather. England were 17 for 2 at stumps on Day 2, trailing Australia by 456 runs.

Earlier, Australia declared for 473/9. Marnus Labuschagne top-scored with 106 while stand-in captain Steve Smith and David Warner missed their centuries but made useful contributions to the team's cause.

Resuming the day on 221/2 Australia started the day on a positive note with Steve Smith hitting a boundary in the very first over of the day to James Anderson. Marnus Labuschangne who was unbeaten on 95 before the start of the day-2 notched up his sixth Test ton.

Labuschagne's stay did not last too long after reaching the triple-figure mark as Ollie Robinson got his priced scalp and his first wicket of the match ending the 65-run partnership for the third wicket. Labuschagne was dismissed for 103 with 8 boundaries punctuating his knock that lasted for 305 balls.

Skipper Steve Smith was not the one to get affected by the fall of Labuschagne's wicket and he kept on batting and scored boundaries off the bad balls he faced. Travis Head too came with a positive mindset and looked to play his shots.

For England, Ben Stokes picked up three wickets while James Anderson chipped in with a couple.

Mitchell Starc Jhye Richardson Michael Neser Rory Burns Haseeb Hameed The Ashes, 2021/22 Cricket
Get the latest updates on ICC T20 Worldcup 2022, check out the Schedule and Live Score. Like us on Facebook or follow us on Twitter for more sports updates. You can also download the NDTV Cricket app for Android or iOS.