After England's annihilation at the MCG, former India cricketer Wasim Jaffer poked fun at Michael Vaughan for a tweet he had shared on 2019. 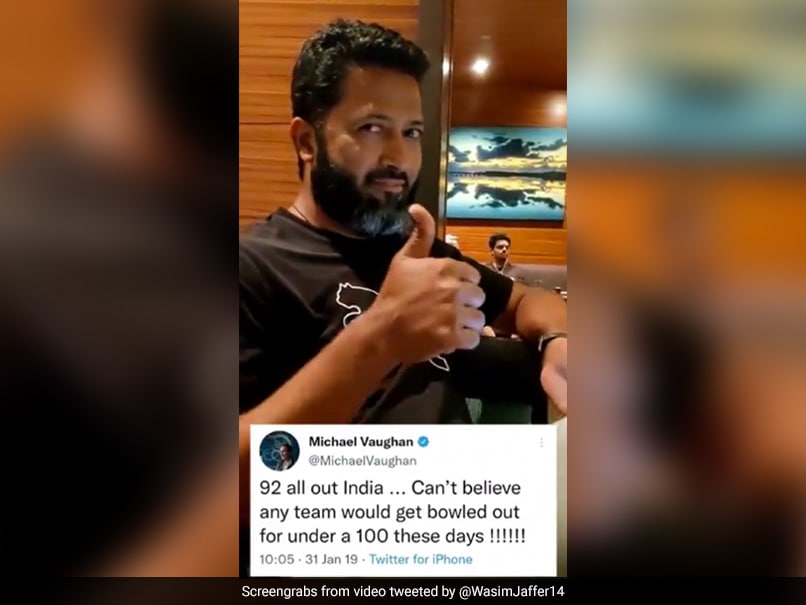 Wasim Jaffer trolled Michael Vaughan after England were bowled out for 68 at MCG.© Twitter

England were completely annihilated by Australia in the third Ashes Test at the Melbourne Cricket Ground on Tuesday as the hosts retained the Ashes urn in ruthless fashion. The English team was heavily criticised following their meek surrender which saw them being packed off for just 68 in the second innings as Australia romped to an innings and 14 runs victory in Melbourne. Former India cricketer Wasim Jaffer took the opportunity to poke fun at ex-England captain Michael Vaughan for a tweet he had shared on 2019.

In 2019, India had been bowled out for 92 by a rampant New Zealand side in an ODI in Hamilton with Trent Boult taking a stunning five-wicket haul. Vaughan, at the time, had tweeted: "92 all out India ... Can't believe any team would get bowled out for under a 100 these days !!!!!!"

Vaughan's post came back to haunt him after England folded for 68 at the MCG.

On Tuesday, Jaffer shared a video, sporting a massive grin and giving the thumbs up with the tweet appearing at the bottom of the screen.

Jaffer's tweet immediately went viral, with even Vaughan reacting to it.

It was total humiliation for England in every sense of the word. Just two batters -- Ben Stokes (11) and Joe Root (28) -- got into double figures as Scott Boland ran riot at the MCG.

The Australian debutant led the hosts' charge, taking six wickets in the four overs he bowled, giving away just seven runs. Mitchell Starc too was brilliant, taking three wickets in the second innings, including an unplayable delivery to Stokes.

With Australia retaining the Ashes in emphatic style, the remaining two Tests of the five-match series become a mere formality. But England will surely be looking to win some pride back after what has been a disastrous year for them in the longest format of the game.

Trent Boult The Ashes, 2021/22 Cricket
Get the latest updates on ICC Women's Cricket World Cup 2022 and IPL 2022, check out the Schedule , Live Score and IPL Points Table. Like us on Facebook or follow us on Twitter for more sports updates. You can also download the NDTV Cricket app for Android or iOS.