The Ashes: Protest at The Oval Over 'Big Three' Takeover

Dozens of demonstrators gathered outside The Oval at the start of the fifth Ashes Test to protest against the ICC for not administrating the game properly. 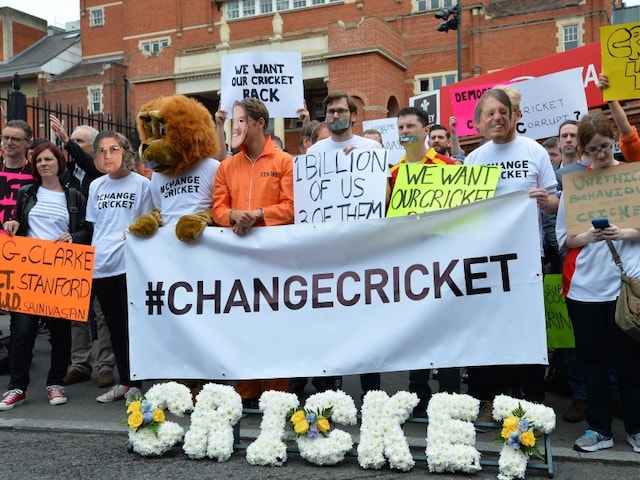 People gathered outside The Oval to protest the maladministration of the game by India, England and Australia.© AFP

Dozens of demonstrators gathered outside The Oval ahead of the start of the fifth Ashes Test between England and Australia on Thursday in protest against the way in which world cricket is now run. (Protests Planned During Fifth Ashes Test At Oval)

The protest was initiated by Sam Collins and Jarrod Kimber, the co-directors of 'Death of a Gentleman. (British Documentary Raises Questions About The Health Of the Game)

Their documentary attacks what they see as the maladministration of the International Cricket Council since India, England and Australia, the sport's three wealthiest nations, effectively took over the global governing body last year.

Demonstrators including Damian Collins, a lawmaker with Britain's governing Conservative Party, held a three minutes' silence, a minute each for India, England and Australia.

'Death of a Gentleman' alleges that international cricket lacks transparency, with former Board of Control for Cricket in India (BCCI) president turned ICC chairman N. Srinivasan, England and Wales Cricket Board president (and former chairman Giles Clarke) and Cricket Australia chairman Wally Edwards running the world game primarily in the interests of their own countries, with other nations having to fight for scraps off the tale.

Collins, a member of the House of Commons Culture, Media and Sport select committee which slammed the running of football governing body FIFA under Sepp Blatter, said cricket's present set-up was damaging the interests of the sport as a whole.

"This is very detrimental to the game," he told reporters. "I will ask the sports select committee to summon Giles Clarke to explain his role."

Comments
Topics mentioned in this article
Australia Cricket Team England Cricket Team India Cricket Team The Ashes 2015 Cricket
Get the latest Cricket news, check out the India cricket schedule, Cricket live score . Like us on Facebook or follow us on Twitter for more sports updates. You can also download the NDTV Cricket app for Android or iOS.