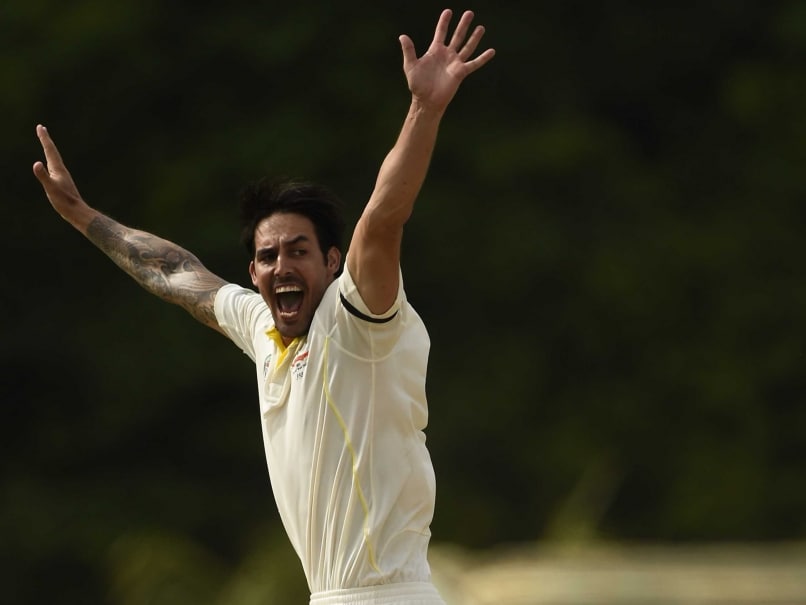 Mitchell Johnson currently has 301 wickets and has a chance to go past his 'hero' Brett Lee's tally of 310 wickets by the end of the Ashes series.© AFP
Nottingham:

But the Test tallies of fellow Australia fast bowlers Brett Lee (310) and Lillee (355) are within range for Johnson. (Broad Wary of 'Dangerous' Clarke)

Last week, Australia lost the third Test at Edgbaston by eight wickets as England took a 2-1 lead in the five-match Ashes series.

One consolation for Johnson was the manner in which he got to 300 Test wickets, a rip-snorting bouncer which England's Jonny Bairstow gloved to wicket-keeper Peter Nevill. (Mitchell Johnson Relishing Banter From English Spectators)

Two balls later, a similar delivery saw Ben Stokes caught behind for a duck as Johnson produced one of the most thrilling spells of bowling in the entire series so far.

"It was a very special occasion," Johnson said Tuesday of the delivery that did for Bairstow.

"And the way I did it. I guess that's sort of a trademark for me now, to bowl that short ball and get it ripping off the gloves," he also told reporters at Trent Bridge, where the fourth Test starts on Thursday.

"The next target for me is trying to chase down Brett Lee. That'd be really nice, he's a hero of mine," Johnson added. (Michael Clarke - Time for Australia's 11th Man to Rise From the Ashes)

"I once said I wanted to bowl as fast as Brett Lee when I first came in on the scene."

But it was Lillee who first alerted Australia's hierarchy to Johnson's talent, having coming across the then teenage paceman in his role as a fast-bowling coach.

Lillee has remained a source of support and Johnson said: "It would be nice to reach DK Lillee. That'd be pretty special.

"You never know, if I get that opportunity to reach him and could end it there as well. It would be a nice little finish as well. It's probably something I don't normally think about.

"It's something that I'll be able to cherish when I finish cricket and am sitting back with my mates enjoying a beer," he added. (Ian Bell Ready For Australian Backlash at Trent Bridge)

Comments
Topics mentioned in this article
The Ashes 2015 Mitchell Johnson Dennis Keith Lillee Australia Cricket Team England Cricket Team Cricket
Get the latest updates on ICC T20 Worldcup 2022 and CWG 2022 check out the Schedule, Live Score and Medals Tally. Like us on Facebook or follow us on Twitter for more sports updates. You can also download the NDTV Cricket app for Android or iOS.