Australia were 184/2 after Chris Rogers and Michael Clarke were dismissed in the first session of the fifth and final Ashes Test at The Oval. 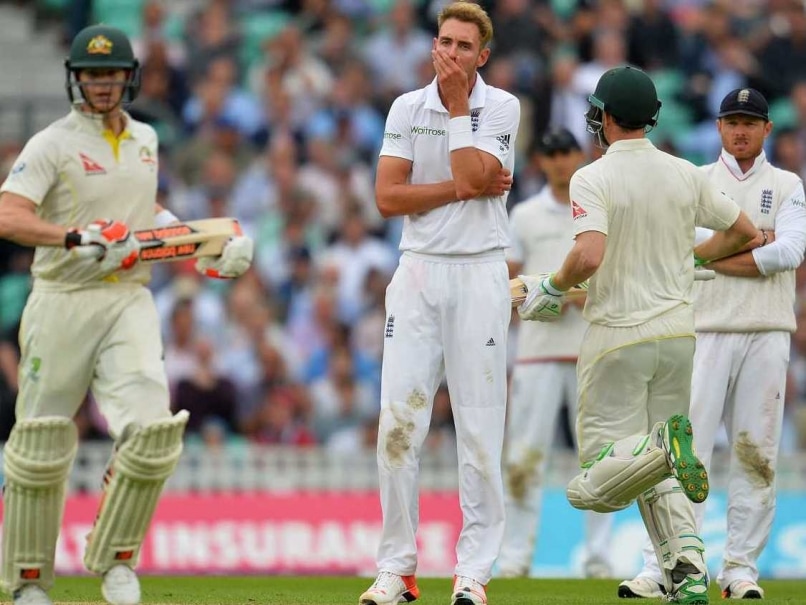 Australia's future leadership team of Steven Smith and David Warner helped restore some pride for the tourists against England on Thursday's first day of the fifth and final Ashes Test at The Oval. (Scorecard | Gallery)

When bad flight forced an early close, Australia, who had lost the toss, were 287 for three -- a marked contrast to their 60 all out in the first innings of their series-losing defeat in the fourth Test at Nottingham's Trent Bridge.

Smith, who will take over as Australia's Test captain when Michael Clarke retires following this match, was 78 not out after future vice-captain Warner had made 85.

Adam Voges was unbeaten on 47, having helped Smith add an unbroken 101 for the fourth wicket.

A green-tinged pitch and overcast skies were reminiscent of conditions at Trent Bridge a fortnight ago where Stuart Broad took a devastating eight for 15 as Australia, likewise sent into bat by England captain Alastair Cook, collapsed in stunning style.

England went on to win by an innings and 78 runs, a victory that saw them regain the Ashes and take an unbeatable 3-1 lead in the five-match series.

But Thursday saw Chris Rogers, also retiring from international duty after this match, and fellow left-handed opener Warner put on 110 for the first wicket as Australia proved they could bat responsibly in typically English conditions.

Broad was fractionally too wide early on against batsmen determined not to 'chase' the ball after their Nottingham nightmare.

The first hour's play saw Australia 19 without loss in 14 overs, compared to 38 for seven in 11 in 60 minutes at Trent Bridge.

Australia's first boundary did not arrive until the 15th over when the normally aggressive Warner pulled Ben Stokes through square leg.

An increasingly assured Warner, gaining from time in the middle, went to a 76-ball fifty when he cover-drove fast bowler Steven Finn for his seventh four.

England eventually separated the pair after lunch when Rogers pushed away from his body against fast bowler Mark Wood and first slip Cook held the outside edge at the second attempt.

Warner, in sight of what would have been his first Test hundred in England, fell when he pushed forward to off-spinner Moeen Ali and was caught at slip by Adam Lyth, the opener swishing his bat in annoyance. 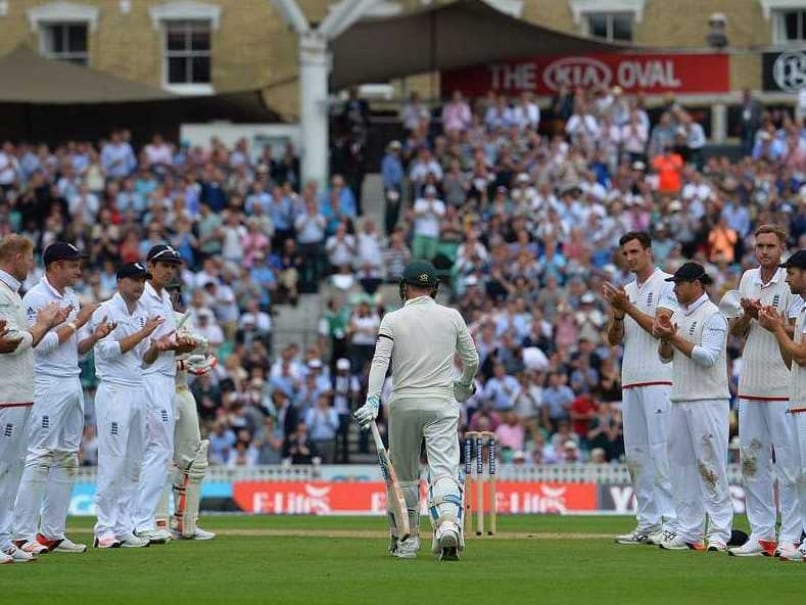 Michael Clarke walked out to a standing ovation at the Oval

New batsman Clarke walked out to a standing ovation from the crowd as England's players formed a guard of honour in the middle for the Australia captain.

But the rousing reception did nothing to lift Clarke out of his prolonged run drought.

One of Australia's greatest batsmen, Clarke exited for 15 when he edged a delivery from all-rounder Ben Stokes that seamed off the pitch to wicket-keeper Jos Buttler.

The captain consulted non-striker Smith and sought a review but there was no denying that Sri Lankan umpire Kumar Dharmasena had made the correct decision.

Smith, returning to form after his 215 and 58 in the second Test at Lord's were followed by four single-figure scores in the next two Tests, cover drove Stokes for his sixth four to complete an 84-ball fifty.

He then went down the pitch to drive Ali for a skimming six over mid-off.

Despite the floodlights piercing the gloom, the umpires halted play at 6:31 pm local time (1731 GMT).

England fielded an unchanged team after all-time leading Test wicket-taker James Anderson was again ruled out with the side injury that saw him miss the fourth Test.

Australia, however, recalled all-rounder Mitchell Marsh after dropping his brother Shaun, a top-order batsman, while fast bowler Peter Siddle was selected for his first Test of the series in place of the injured Josh Hazlewood.

Comments
Topics mentioned in this article
Australia Cricket Team England Cricket Team David Warner Chris Rogers The Ashes 2015 Cricket
Get the latest updates on SA vs IND 2021-22, check out the Schedule and Live Score . Like us on Facebook or follow us on Twitter for more sports updates. You can also download the NDTV Cricket app for Android or iOS.