As Michael Clarke walked out to bat he received a standing ovation from a packed crowd at the south London ground while the England players, led by captain Alastair Cook, formed a guard of honour as he approached the crease. 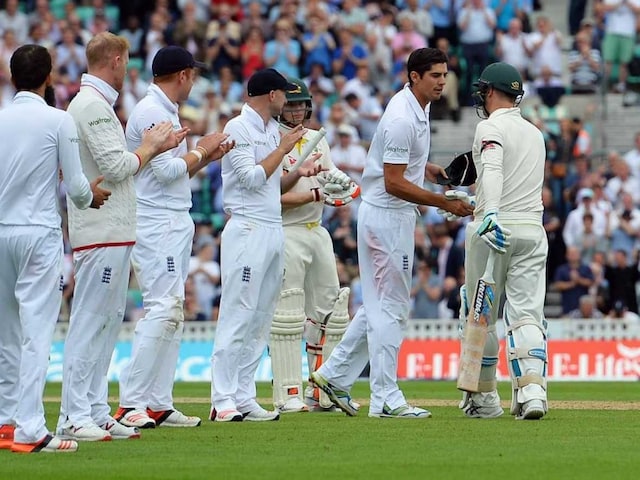 David Warner praised England for the respect they'd shown towards Michael Clarke in marking the Australia captain's final Test with a guard of honour during the Ashes finale at The Oval on Thursday.

As Clarke walked out to bat he received a standing ovation from a packed crowd at the south London ground while the England players, led by captain Alastair Cook, formed a guard of honour as he approached the crease.(Day Report | Scorecard)

Thousands of miles away in Colombo, Sri Lanka great Kumar Sangakkara received a similar tribute in his last Test against India.

"I think that he deserved it," said Warner of the reception Clarke received on the first day of the fifth Test on Thursday.

"All the greats of the game deserve that credit. We saw what India did for Sangakkara as well and he (Clarke) deserves that.

"He's been a fantastic captain, a fantastic leader and good team man for us, especially over the few years I've been part of his career," added Warner.

"He thoroughly deserved that today and it was great respect from the English cricket team."

For England all-rounder Ben Stokes the gesture was easy to make.

"It's something we discussed, you've got to pay respect to someone who's played as well as he has, so it was a no-brainer," said Stokes.

But while Warner made 85 in a much improved Australia batting display that saw the tourists, who've already lost the Ashes at 3-1 down in a five-match series, end the first day on 287 for three, all the tributes paid to Clarke could not end his miserable run of low scores.

Clarke, one of the best batsmen of his generation but in the middle of a prolonged dip in form, fell when for 15 he was caught behind by wicket-keeper Jos Buttler off a rising delivery from pace bowler Stokes that cut away off the seam.

But Indian replay official S Ravi upheld Dharmasena's verdict after technology indicated a thin nick and Australia were 186 for three.

Clarke faced 29 balls in 42 minutes Thursday, driving off-spinner Moeen Ali down the ground for the only four of his innings.

Prior to this match, the 34-year-old Clarke announced he would be retiring from international duty after the end of the fifth Test.

It also left him with a meagre tally for this Ashes series of 132 runs in nine innings at an average of 16.50.

Only Ricky Ponting, Allan Border and Stephen Waugh -- all former captains -- have scored more Test runs for Australia than Clarke.

Clarke, plagued by a chronic back problem throughout his career and struggling of late with hamstring trouble, will bow out of international cricket having never won a Test series in England.

The New South Wales shotmaker is also the first Australian to be on the losing side in four successive Ashes series in England in more than a century.

Comments
Topics mentioned in this article
Australia Cricket Team England Cricket Team Michael Clarke The Ashes 2015 Cricket
Get the latest Cricket news, check out the India cricket schedule, Cricket live score . Like us on Facebook or follow us on Twitter for more sports updates. You can also download the NDTV Cricket app for Android or iOS.