Australia coach Darren Lehmann has dismissed criticism from Shane Warne regarding the selection of Peter Siddle over Pat Cummins in the fifth and final Ashes Test. 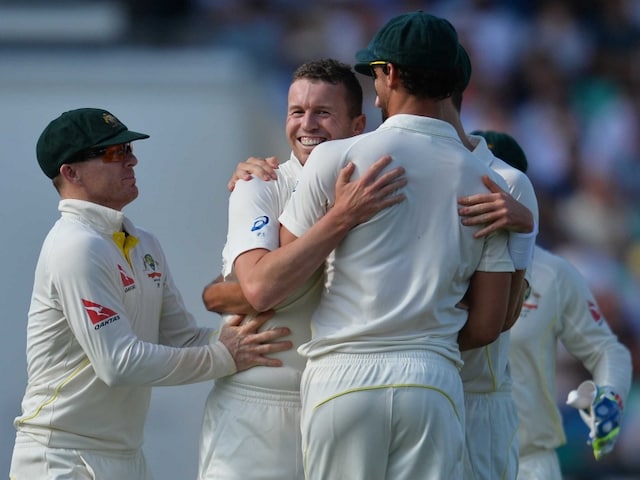 Shane Warne criticised the selectors for picking Peter Siddle in the final Test ahead of Pat Cummins.© AFP

Australia coach Darren Lehmann has dismissed criticism from Shane Warne that the selectors made a mistake in picking Peter Siddle for the fifth and final Ashes Test against England. (Shane Warne Slams Australia Team Selection for Oval Test)

Siddle, playing his first match of the series, was Australia's best bowler at The Oval, taking four for 35 in England's second innings as Australia won by an innings and 46 on Sunday. (Shane Warne Accuses Rodney Marsh of Panic)

But it was all too late to sway the destiny of the Ashes, with Australia's win merely reducing the margin of England's series victory to 3-2. (Michael Clarke on Par with Border: Warne)

Warne, commentating for Sky Sports television, repeatedly suggested that 30-year-old paceman Siddle should have been picked for the fourth Test when the series was up for grabs.

According to the former Australian legspinner, during the dead rubber at The Oval, the selectors would have been better off having a look at a younger bowler such as Pat Cummins.

The way Siddle bowled at The Oval made his omission from the previous four Tests look all the more bizarre with Warne, a close friend of retiring captain Michael Clarke, alleging that the skipper and Lehmann both wanted Cummins to play at The Oval only to be over-ruled by chairman of selectors Rodney Marsh.

"Someone like Shane Warne always has his opinion because he loves an opinion full stop. That's fine but he doesn't know what goes on behind the scenes and we'll keep it like that. I'll probably stop there. Peter bowled really well, I'm really pleased for him. Hats off to him, he was absolutely brilliant," Lehmann remarked.

Although not as fast as other members of Australia's pace attack, Siddle provided a much-needed element of control in the field.

"We're not saying we pick out and out fast bowlers all the time, obviously it may seem that way, but we pick the best team to try and win every game," former Australia batsman Lehmann said.

As for Warne's suggestion that Clarke hadn't got his preferred team, Lehmann said: "In my time I can't remember the captain not getting the side he wants. I think the captain has a really important part to play and he's got to be really comfortable with the side he plays with. It's our job to pick that final XI but you always consult the captain, that's important."

Meanwhile this Ashes continued the modern trend of home teams dominating the series.

Only once in the past eight Test series clashes between the arch-rivals have the away team come out on top -- when Andrew Strauss's England side won 3-1 in Australia in 2010/11.

And what is true of the Ashes is true of Test cricket as a whole, with just three of the last 14 completed Test series won by the away team -- Pakistan in Sri Lanka and Bangladesh and Australia in the West Indies.

England's Ashes win will certainly be put into greater context by how Alastair Cook's men fare on tough tours later this year that see them face Pakistan in the United Arab Emirates before traveling to South Africa.

"I think winning away from home for every Test country is the big thing now," said Lehmann.

"That's the challenge for the world game because there's a huge advantage playing at home. We haven't adapted well enough here, so it's a big challenge when we come back here in 2019, but you can't look that far ahead."

What we've got to look at is a tough series against Bangladesh...we've got an away series against New Zealand, who are going to be tough over there. The team that plays well away from home will be the best team in the world," he said.

Comments
Topics mentioned in this article
Peter Siddle Pat Cummins Shane Warne Darren Lehmann Australia Cricket Team The Ashes 2015 Cricket
Get the latest Cricket news, check out the India cricket schedule, Cricket live score . Like us on Facebook or follow us on Twitter for more sports updates. You can also download the NDTV Cricket app for Android or iOS.