Chris Rogers, who was struck on the helmet in the Lord's Test, could make way for Shaun Marsh in the third Test at Edgbaston. 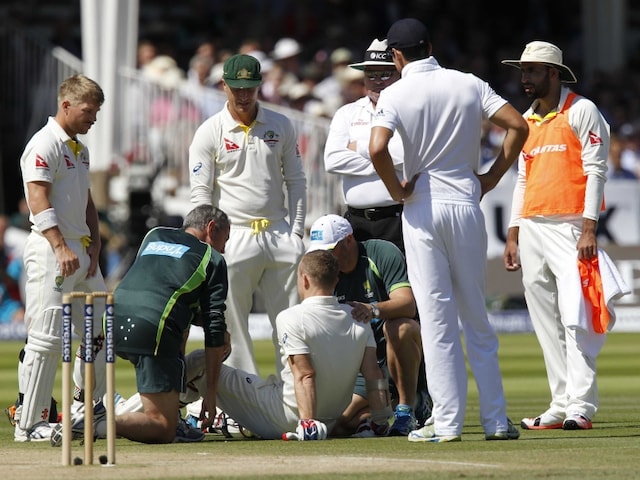 Chris Rogers being attended to during Lord's Test after feeling dizzy!© AFP

Chris Rogers will have to undergo further medical assessment on Friday before he can be cleared to play in the third Ashes Test at Edgbaston.

Rogers, 37, has spent the early part of this week seeing specialists and being scanned, accompanied by the Australia team doctor, Peter Brukner, but some irregularities in the findings have forced the tourists to take further precautions. (Gary Ballance will be Back, says his Ashes Replacement Jonny Bairstow)

"Chris will remain in London where he will have further checks on Friday," confirmed a Cricket Australia spokesperson. (Ravi Bopara, England's forgotten man, dreams of another Ashes opportunity)

During the fourth morning of Australia's 405-run victory at Lord's Rogers, who will retire from international action at the end of the series, began feeling disoriented while batting. (Last Ring for Ian Bell in Third Test, Feels Geoffrey Boycott)

It was initially suspected that he had suffered delayed concussion after Jimmy Anderson's bouncer at the start of the second day struck him on the helmet. However, after retiring ill on 49, he did not show any hallmarks when tested by Brukner. (Michael Clarke Rubbishes Talk of Flat Pitches)

The complaint was diagnosed as a "delayed ear problem", although specialists have since suggested the symptoms displayed are more commonly associated with an ear infection rather than a trauma.

It is understood that a further complication is that Rogers suffers dizziness only when his head is in a certain position.

The fact that he is in such a rich vein of form - he hit a first-innings 173 and was a single short of a ninth half-century in 10 innings in the series-levelling second Test - suggests that Australia will give him the time required to prove his fitness.

Equally they have shown they are unwilling to take any chances with head injuries, emphasised by their benching the Middlesex player for the Tests in the Caribbean last month after he was concussed.

On Sunday he was forced to sit down in the middle after his vision became an issue. " He actually said to me: 'The grandstand is moving, and I said: 'No, it's not,'" revealed his opening partner, David Warner.

Shaun Marsh, whose brother Mitchell made such an impact in the Lord's success, would be called up if concerns over Rogers remain.

The Western Australia batsman was the last player to emerge from the nets on Wednesday at Derby, where Michael Clarke's team are playing Derbyshire in a three-day match.

First-choice wicketkeeper Brad Haddin will push his claims for a recall for Edgbaston next Wednseday after time out for personal problems in a touring XI also including his understudy Peter Nevill.

Only a dozen Australian players travelled north with Steve Smith and the pace bowling trio of Mitchell Johnson, Mitchell Starc and Josh Hazlewood remaining in the capital to rest.

Comments
Topics mentioned in this article
The Ashes 2015 Chris Rogers England Cricket Team Australia Cricket Team Cricket
Get the latest Cricket news, check out the India cricket schedule, Cricket live score . Like us on Facebook or follow us on Twitter for more sports updates. You can also download the NDTV Cricket app for Android or iOS.