The Australian opener found himself in hot water before the start of the Ashes when a brief foray into the ticket resale business went awry but he put his money where his mouth is against England's attack at the start of the second Test. 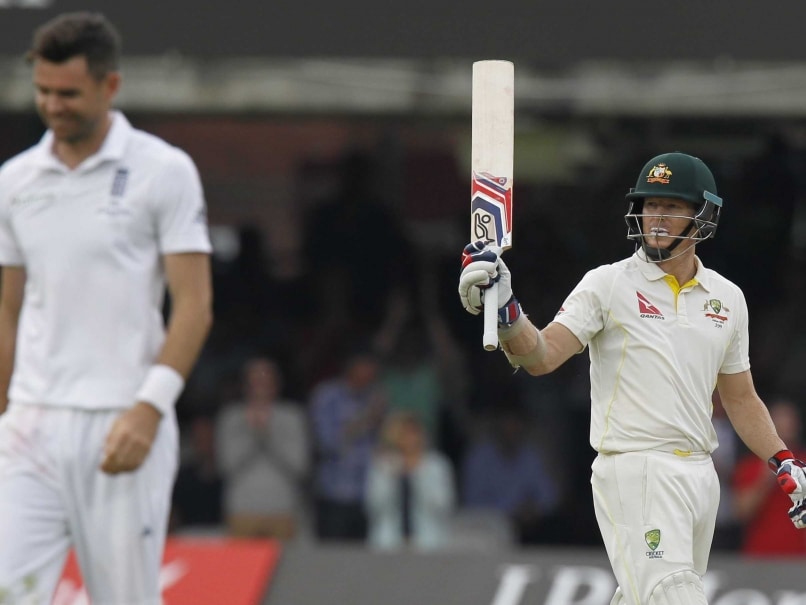 The fist pump that immediately followed the on-driven four off the first ball of Jimmy Anderson's 15th over said it all. Here was Chris Rogers, the craggiest of opening batsmen with the crustiest of old arm guards, knowing his final Test series will, whatever happens hereafter, have produced a moment of personal triumph. (Cook's secret weapon - a 15-year-old Indian)

A fifth international century on day one of the second Test, secured only moments after the effervescent Steve Smith had passed three figures himself, will now see the name Rogers given a permanent place on the international honours board of a ground that has become something of a second home. The 37-year-old's love affair with Lord's goes on.

The left-hander has played many a fine innings here before, scoring 2,238 first-class runs and striking seven centuries in St John's Wood, the pinnacle of which came last summer when, in his fourth season as Middlesex captain, an unbeaten 241 against the eventual champions Yorkshire chased down 472 for a famous seven-wicket victory.

But as a response to his side's public flogging in Cardiff - a match where he stood up with a first-innings 95 as his teammates folded - this must top the lot. Rogers batted all three sessions for an unbeaten 158 and in Smith he found a partner with equal adhesiveness - if a touch more flamboyancy - as the pair went past the stand of 231 enjoyed by Don Bradman and Bill Woodfull in 1931, an Australia second-wicket record at the Home of Cricket. They resume with the partnership sitting 259 to the good .

Rogers' flirtations with danger were minimal. There was a flash off Anderson over the slips third ball, a fresh air shot against Stuart Broad that must have sniffed off stump, half a run-out chance in the over after lunch and a tough leg-side chance on 78 off Moeen Ali that the wicketkeeper Jos Buttler will lose little sleep over.

It had become apparent before a ball was bowled that Rogers was intent on extracting maximum value from this final tour, with his time in England beginning with an explanatory session in front of the television cameras prior to the warm-up match with Kent following a brief foray into the ticket resale business.

Before the start of play on Thursday, the official Twitter account of Cricket Australia called on its audience - via a video on their official website - to join Rogers for "the amazing walk out to the middle", an invitation that could not pass without a wry smile from those who have followed the left-hander's early summer tribulations.

It is at this famous old ground that Rogers, and his former Middlesex team-mate Tom Scollay, were hoping to earn a few extra pounds by packaging up tickets with a picnic hamper and the added delights of meeting Steven Finn or Sam Robson in the hope that touring Australian supporters would be prepared to part with as much as Â£2,910 for the privilege.

Marylebone Cricket Club quickly clamped down on the scheme and no tickets exchanged hands, instead putting them back into the ballot where they were sold at the regular prices. Rogers was, it is understood, the victim of duff information from his unnamed contact at Middlesex and apologised for the misunderstanding. The club he hopes to rejoin next summer claim no grudge is held.

Australia will have a job replacing Rogers at the top of the order after the conclusion of this series, with the next cab of the rank, Shaun Marsh, having scored 15 centuries in his 15 years as a professional. Until then, they have the perfect foil for their self-combusting wildcard, David Warner, at the top of the order. His nickname is Buck and he looks intent on cashing in.

Comments
Topics mentioned in this article
The Ashes 2015 England Cricket Team Australia Cricket Team Chris Rogers Cricket
Get the latest updates on IND vs NZ 2021, check out the Schedule and Live Score . Like us on Facebook or follow us on Twitter for more sports updates. You can also download the NDTV Cricket app for Android or iOS.