Ashes: Chris Rogers Gets Through Net Session Before Edgbaston Test 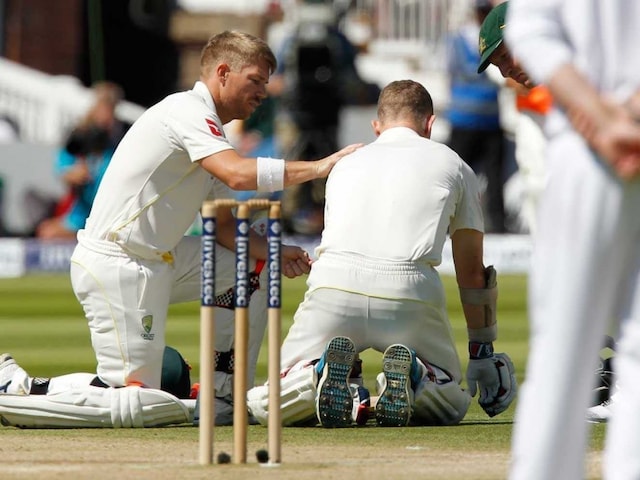 Chris Rogers (R) is helped by AustraliaÂs David Warner after appearing to suffer a dizzy spell during the Lord's Test.© AFP
Birmingham:

Australia opener Chris Rogers came through a nets session against the tourists' pace attack with no visible ill-effects at Edgbaston on Monday as he aimed to prove his fitness for the third Ashes Test. (Rogers Returns to Australia Squad)

The 37-year-old left-hander succumbed to a sudden bout of dizziness during the second Test at Lord's last Sunday and had to leave the field as Australia completed a 405-run thrashing of England to level the five-match series at 1-1. (David Warner - Australia's Future Vice-Captain?)

A week of tests in London revealed nothing more serious than a balance problem in the inner ear, thought to have been caused when he was hit on the helmet by a short ball from James Anderson at Lord's in his first-innings 173 -- Rogers's Test-best score.

Rogers, who plans to retire after the Ashes, missed the three-day tour match at Derby completed Saturday where Shaun Marsh -- who replaced him in Australia's recent 2-0 series win in the Caribbean after he suffered a concussion while batting in the nets -- made a first-innings hundred in a rain-affected draw.

Comments
Topics mentioned in this article
Australia Cricket Team Chris Rogers The Ashes 2015 Cricket
Get the latest Cricket news, check out the India cricket schedule, Cricket live score . Like us on Facebook or follow us on Twitter for more sports updates. You can also download the NDTV Cricket app for Android or iOS.