England have never won an Ashes series 4-0 and promised no let-up against arch-rivals Australia in the final Test at The Oval. 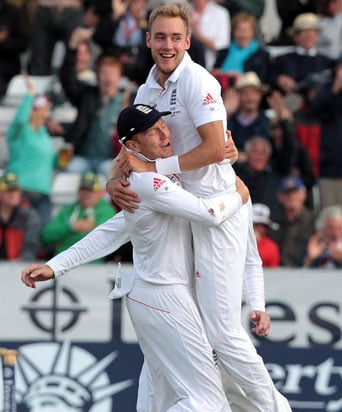 England captain Alastair Cook promised no let-up against arch-rivals Australia in the final Test after a stunning win gave them an unbeatable lead in the Ashes series.

Stuart Broad's latest match-winning spell saw England to a 74-run win in the fourth Test at Chester-le-Street on Monday as Australia, set 299 for victory, lost their last nine wickets for just 77 runs in a dramatic final session that saw them collapse to 224 all out with more than a day to spare.

Victory left England, who'd already retained the Ashes, an unassailable 3-0 up heading into the fifth and final Test at The Oval in south London starting on August 21.

And the last time Australia, ended an Ashes campaign, as opposed to one-off matches against their oldest foes, 'winless' was when Greg Chappell's side lost a five-match contest 3-0 in England in 1977, the final series before the Australian game was briefly split apart by Kerry Packer's World Series Cricket.

"Nine wickets in a session, the crowd, the excitement and the nerves at the beginning. It was the moment," Cook said as he savoured the joy of overseeing England's third successive Ashes series win over Australia. (Day 4 as it happened)

"We are going to get greedy and try and repeat that at The Oval, but we can think about that with sore heads tomorrow (Tuesday)," he added.

Fast-medium bowler Broad led England's attack on Monday with a return of six wickets for 50 runs on his way to a Test-best match haul of 11 for 121.

The 27-year-old may blow hot and cold but, as his Nottinghamshire and England team-mate Graeme Swann, who took the first two Australian wickets to fall on Monday, observed: "When he's hot, he's 'surface-of-the-sun' hot."

In 2009, Broad steered England to Ashes glory in similar style at The Oval and in May he produced another stunning spell of seven for 44 as New Zealand, shot out for 68, were thrashed by 170 runs at Lord's.

When Broad gets going, he is capable of producing deliveries as near unplayable as makes no difference with Monday's dismissal of Australia captain and world-class batsman Michael Clarke, courtesy of a fast leg-cutter which clipped the top of off stump, a case in point. (Oz media slam 'shameful' batting)

Man-of-the-match Broad, appropriately, wrapped up proceedings after England claimed the extra half-hour when he had Peter Siddle hole out to James Anderson at mid-off.

"Words can't justify how good a spell of bowling that was," Cook said.

"It was a fine spell of bowling. That's probably not the right adjective either. (Broad smiles grace Britain's front-pages)

"Broady knew that and the lads knew that. He really charged in.

"When everything clicks and bowling in the high 80s with the control Broady has it's incredibly hard to bat."

Things looked very different indeed while Australia openers Chris Rogers and David Warner were compiling a partnership of 109, with Warner looking in especially good touch before he was caught behind off seamer Tim Bresnan for 71.

"Fair play to Chris and David, they batted very well although if we are totally honest we didn't quite get it right with the ball," Cook said.

"When we got that third wicket (Warner) and we then had the two right-handers in, the 'big man' here did his stuff."

"It was a very special afternoon. We gathered ourselves at tea with Australia having won that session without doubt.

"At the start of that period Bressy and I got together and said 'Come on we can really put the squeeze on here'.

"Once we got one wicket the crowd got behind us and with that the team were really lifted."