Top seed Caroline Wozniacki stepped up her bid to win her first Indian Wells title by brushing aside Maria Jose Martinez Sanchez to reach the fourth round on Monday. 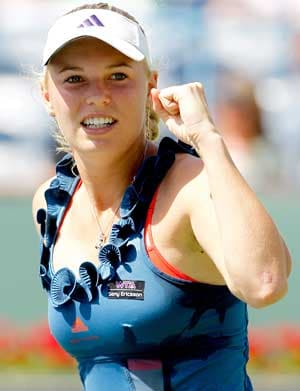 Top seed Caroline Wozniacki stepped up her bid to win her first Indian Wells title by brushing aside Maria Jose Martinez Sanchez to reach the fourth round on Monday.

The 20-year-old Wozniacki, who lost to Sanchez in their three previous matches, swept past the Spaniard in straight sets 6-1, 6-3 in the $9 million dollar WTA and ATP Masters 1000 hardcourt tournament.

Wozniacki, who needs a strong showing in Indian Wells to hold onto her No. 1 ranking, dispatched Sanchez in just 71 minutes, winning 85 percent of her second-serve opportunities and saving two break points.

"I had to focus on my own serve," Wozniacki said. "She has a pretty tricky serve, so once I had broken her, I just needed to keep my serve.

"That sounds very easy, but it's difficult to do sometimes.

"I had to fight till the last point, because you never know what to expect."

Wozniacki, Danish-born of Polish parentage, moves on to the fourth round where she will face the winner of a match between Russian Alisa Kleybanova and 13th seed Flavia Pennetta of Italy.

Sanchez had beaten Wozniacki three times previously dating back to the final of the 2009 Bastad clay court tournament where the Spaniard won 7-5, 6-4.

"In Bastad I played her on my birthday," Wozniacki said. "I thought she was going to give me a present, but she did not."

Each year Wozniacki has improved her showing at Indian Wells, reaching the final last year where she lost to Jelena Jankovic 6-2, 6-4.

All four of her losses in the California desert have been to top 10 players and this is the first year she has come into this event as world number one.

This is her second stint as the top ranked player having reclaimed the title on February 21 from Kim Clijsters. She also had it for 18 weeks beginning in October of 2010.

"I was actually pressuring myself when I had this one week (at No. 1), because I knew that there was a girl who had it two only weeks.

"So I was like, I don't want to be the one who has had the least weeks. I'm just happy about having that ranking, and I'm playing well.

"I'm improving my game. I'm healthy, knock on wood. So that's the most important thing."

Comments
Topics mentioned in this article
Caroline Wozniacki Maria Jose Martinez Sanchez Tennis
Get the latest Cricket news, check out the India cricket schedule, Cricket live score . Like us on Facebook or follow us on Twitter for more sports updates. You can also download the NDTV Cricket app for Android or iOS.