Veteran Leander Paes will make yet another attempt to create the Davis Cup record for the most doubles win as India clash with China in their den in "brutal" cold conditions for a place in the World Group Play-offs, starting on Friday. 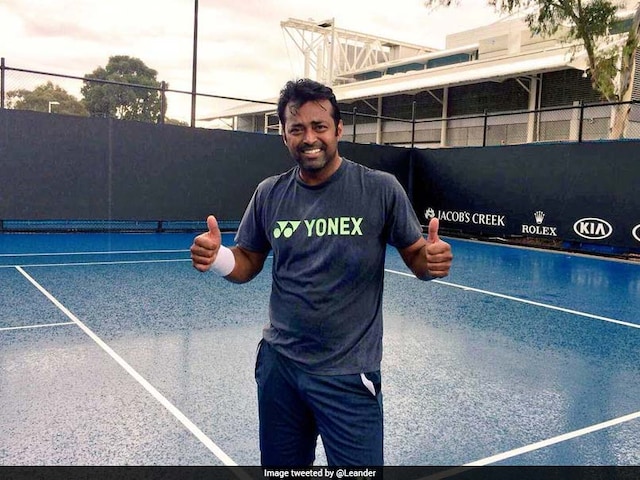 Veteran Leander Paes will make yet another attempt to create the Davis Cup record for the most doubles win as India clash with China in their den in "brutal" cold conditions for a place in the World Group Play-offs, starting Friday. The 44-year-old Paes is tied on 42 wins with Italian great Nicola Pietrangeli and one more win will make him the most successful doubles player in the history of Davis Cup. Paes had a chance to the make the record when India hosted New Zealand in Pune in February 2017 but doubles was the only match India lost in that tie.

What followed in Bengaluru against Uzbekistan was an avoidable controversy as captain Mahesh Bhupathi chose to put Paes on bench, fielding Sriram Balaji with Bopanna.

Those were two chances when Paes could have got that coveted record in front of his home fans but now after reclaiming his place in the team on the back of some stellar show in the last few months, he has to do it thousands of miles away from home in alien conditions.

"Playing China in China will be tough. They have got a junior who won the (junior) US Open, plus they have a tough doubles team, which beat a good New Zealand side. It's going to be tough. The Chinese play well together as a team. It's wonderful after 29 years to go for a world record for India. I am happy to be back in the Indian team. But for me it's important for the team to win the tie," Paes told PTI in an interaction.

The build up to the second round tie in the Asia/Oceania Group I tie had its share of controversy with Rohan Bopanna expressing reluctance to be on the same team which had Paes before agreeing to travel to China.

Paes strongly believes that Bopanna's initial reluctance to pair with him will not be a hindrance.

"I have always believed Rohan and me make a very good team. His power, my control. His big serve, my net game. The match against Serbia (in 2014), we were down by two sets against multiple Grand Slam winners but we still managed to come back and win in five sets. That was one of the great doubles wins of my career. I was happy to do that alongside Rohan."

India's top singles player Yuki Bhambri pulled out of the tie due to a minor abdomen injury, handing a gritty Ramkumar Ramanathan a responsibility to spearhead the Indian challenge along with young and talented Sumit Nagal.

The tie will be fought in a new two-day format where best of three set matches will be played instead of best of five.

"Our team will certainly miss Yuki a lot. For me his achievement in last one month, qualifying for Miami masters and beating Lucas Pouille was fantastic. Yuki is probably playing the best tennis of his career," Paes said.

On paper, India definitely are a strong side with both Ramkumar (132) and Nagal (213) better-ranked than China's top two singles players -- Ze Zhang (247) and Di Wu (248) -- but the hosts have a very strong weapon in Yibing Wu, who is being hailed as China's superstar in making.

The 18-year-old has a humble rank of 332 to show but he is the current junior world number one who made the world take note of him by winning the junior US Open last year.

He already has Challenger singles title under his belt with a win over seasoned Yen-Hsun Lu (then world number 62, in September last).

It's not a surprise that Chinese captain Wei Jiang has decided to unleash the young gun in the opening match of the tie against Ramkumar.

However, both Ramkumar and and Nagal have matured as players who can soak in pressure and deliver the goods.

Ramkumar will open India's campaign against Yibing and Nagal will take on Zhang on Friday.

On Saturday, Paes and Bopanna will clash with Di Wu and Mao-Xin Gong and the doubles will be followed by reverse singles the same day.

"It's good to have Ram starting the tie. He has a lot more experience than the kid does. So he has to execute," Captain Bhupathi said.

Asked about the conditions as it was snowing yesterday, resulting in drop in temperatures, Bhupathi said, "Conditions are brutal for all players so whoever stay mentally stronger will benefit. It's cold and slow."

"Conditions are very tough as it's extremely cold for playing outdoors. But we have to brave it since there is no Davis Cup rule for minimum temperature. Hopefully Ram can give us a good start for Sumit to play with less pressure. It will be tough since conditions are harsh," Zeeshan said.

"Yuki pulling out has come as a shock but injuries are part of a player's career. We have to work hard to get those three points," the coach added.