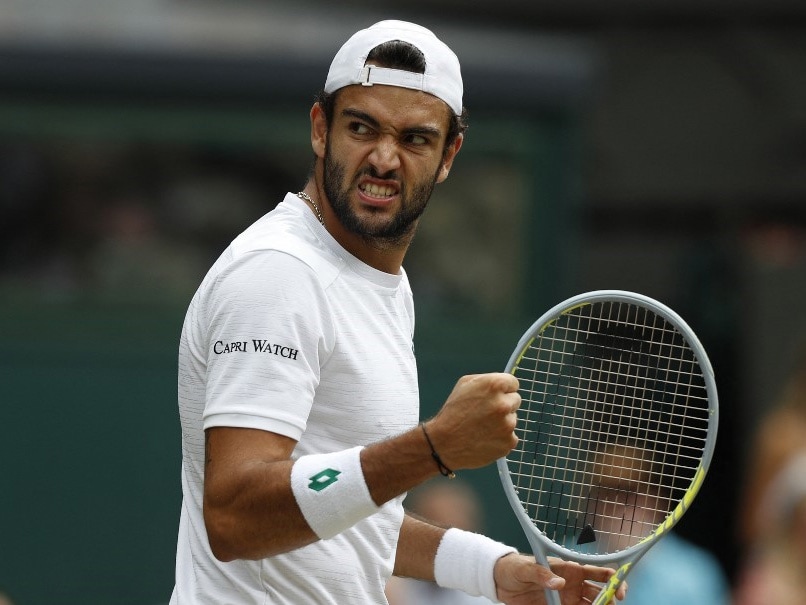 Matteo Berrettini became the first Italian to reach a Wimbledon singles final on Friday with a four-sets victory against Hubert Hurkacz as Novak Djokovic set his sights on a 30th Grand Slam championship match. Berrettini claimed a 6-3, 6-0, 6-7 (3/7), 6-4 win over his Polish opponent who had knocked out eight-time champion Roger Federer in the quarter-finals. World number nine Berrettini will face either Djokovic or Denis Shapovalov in Sunday's final where he will attempt to become Italy's first men's Grand Slam champion since Adriano Panatta at the 1976 French Open. "I think I never dreamed about this because it was too much for a dream," said Berrettini.

"I am trying to be the best at everything but after the third set I was feeling I deserved to win it but lost it.

"I said 'it doesn't matter', I was feeling the stronger player and that's what I said to myself and eventually it paid off."

Should he win on Sunday, Berrettini may be able to celebrate a national double with Italy facing England in the Euro 2020 final in London later that day.

"So far it is the best tennis day of my life but hopefully Sunday will be even better. I feel kind of chills but I am doing it, so I have to believe it."

Berrettini, having wasted three break points earlier in the first set, eventually broke through in the seventh game, backing it up in the ninth, converting set point courtesy of an ugly forehand shank from the Pole.

The 25-year-old then raced through the second set in just 23 minutes, a Hurkacz double fault and a wrong-footing forehand allowing Berrettini to seal a 10th successive game.

That became 11 games in a row at the start of the third set before 18th-ranked Hurkacz, bidding to be the first Polish man to make a Slam final, stopped the rot.

Hurkacz held on and swept the third set tiebreaker but his momentum was quickly halted as the Italian broke for 1-0 in the fourth.

Berrettini was unable to convert a match point in the ninth game but made no mistake on his own service.

The Italian fired 22 aces, taking his tournament total past the 100-mark, and 60 winners.

He only faced two break points, both of which he saved.

Djokovic can reach a seventh Wimbledon final later Friday, driven on by the desire to capture a sixth title at the All England Club and record-equalling 20th Grand Slam title.

The world number one will be overwhelming favourite to defeat semi-final opponent Denis Shapovalov, the Canadian player he has already beaten six times out of six.

Djokovic is playing in his 10th semi-final at Wimbledon and 41st at the majors while his progress at the event has comfortably taken his career earnings past the $150 million mark.

Apart from dropping the first set of his opener against British wildcard Jack Draper, Djokovic has been untroubled.

"I feel like I've been playing, hitting the ball well throughout the entire tournament, putting myself exactly where I want to be: semi-finals," said 34-year-old Djokovic who can reach his 30th Slam final.

Djokovic has only dropped serve four times at this year's Wimbledon and faced just 15 break points.

In a further indication of his growing dominance in the Slams race, since the beginning of 2015, he has won 15 of the 16 major semi-finals he has contested.

Victory on Friday will take him a step closer not only to a sixth Wimbledon title but also to becoming just the third man in history to complete a calendar Grand Slam.

It's a feat so rare that it hasn't been achieved since Rod Laver swept all four majors in the same year for a second time in 1969.

"Sometimes things do look surreal for me but I try to live in the moment and take every opportunity I have on the court," said Djokovic.

In the quarter-final, the 22-year-old had to mix style and steel to see off Russia's Karen Khachanov in five sets.

On Friday, he will need to have his service game, which has powered 60 aces so far, cranked up to the maximum.

Before this year, Shapovalov had only won one match at Wimbledon while his best Grand Slam performance was a run to the US Open quarter-finals last year.

Comments
Topics mentioned in this article
Matteo Berrettini Hubert Hurkacz Tennis
Get the latest updates on ICC T20 Worldcup 2022, check out the Schedule and Live Score. Like us on Facebook or follow us on Twitter for more sports updates. You can also download the NDTV Cricket app for Android or iOS.