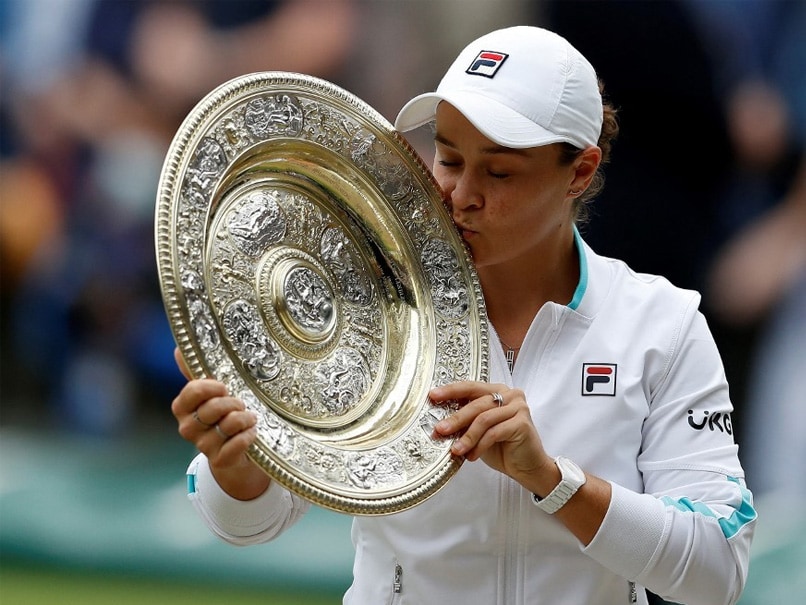 Ashleigh Barty won her first Wimbledon title on the 50th anniversary of fellow indigenous Australian Evonne Goolagong Cawley's maiden crown, beating Karolina Pliskova 6-3, 6-7 (4/7), 6-3 in the final on Saturday. The 25-year-old Australian -- who wore a specially-designed dress in tribute to Cawley's iconic scallop one she sported in 1971 -- adds the Wimbledon crown to her 2019 French Open title. "It took me a long time to verbalise, to dare to dream it and say it," said Barty, who was also fulfilling a childhood dream.

"I didn't sleep a lot last night, I was thinking of all the what-ifs. I hope I made Evonne proud."

It was the first women's Wimbledon final to go to three sets since 2012 when Serena Williams beat Poland's Agnieszka Radwanska.

Barty is also the first top seed to win the women's title since Williams in 2016.

Barty had looked like cruising to victory after soaring into a 4-0 lead over her opponent -- the Australian's start so blistering that she won the first 14 points.

However, 29-year-old Pliskova steadied herself while Barty faltered when she served for the match at 6-5 in the second set.

The Czech broke and then swept the tiebreaker to take the final into a decider.

Barty got the break for 2-0 in the final set and despite one or two wobbles she got herself over the line sinking to her knees, her hands over her face in disbelief.

She wiped a couple of tears away before climbing up to the player's box, just like her compatriot Pat Cash did when he won the Wimbledon men's title in 1987.

Victory would taste sweeter too as only last month she retired from the French Open in the second round due to a left hip injury.

"This is incredible," said Barty, the third Australian woman to be crowned Wimbledon singles champion in the Open era (Cawley and Margaret Court (1970) the others).

"I have to start with Kaja (Karolina Pliskova).

"Congratulations on an incredible tournament to you and your team. I love testing myself against you and I'm sure we'll have many many matches."

Barty is masterful at remaining poker-faced on court and she managed to restrain her emotions largely at the presentation ceremony.

However, once off court she sobbed as she hugged her boyfriend Gary Kissick.

For Pliskova, it was more heartbreak as the former world number one fell at the final hurdle in three sets in the 2016 US Open final.

At one point with Hollywood superstar Tom Cruise looking on it looked feasible, though, that she could pull off mission impossible in winning the title.

However, her previously superb weapon -- her serve that had only been broken four times prior to the final -- deserted her when she most needed it.

So did her emotions as Pliskova -- the fourth Czech woman to appear in a Wimbledon singles final in the Open era -- spoke after receiving the runner-up trophy.

Her tears, though, did not compare to those shed by her late compatriot Jana Novotna when she lost in the 1993 final and had to be consoled by the Duchess of Kent.

Perhaps of some consolation to Pliskova is Novotna picked herself up after that defeat and won the title in 1998.

"I never cry, never, and now," said Pliskova stepping back a bit.

"I want to say Ash [Barty] played an incredible tournament, I fought to make it difficult for her but she played very well so congrats to her.

"I want to thank all my team. All the success goes to them, without them I would not be here, and my family of course.

"No matter which trophy I have we have had an incredible two weeks here."

Comments
Topics mentioned in this article
Ashleigh Barty Karolina Pliskova Tennis
Get the latest updates on India vs South Africa and check out  Schedule, Results and Live Score. Like us on Facebook or follow us on Twitter for more sports updates. You can also download the NDTV Cricket app for Android or iOS.