Rafael Nadal said he would like to play alongside career rival and friend Roger Federer in a dream-team doubles pairing at a tournament before they retire. 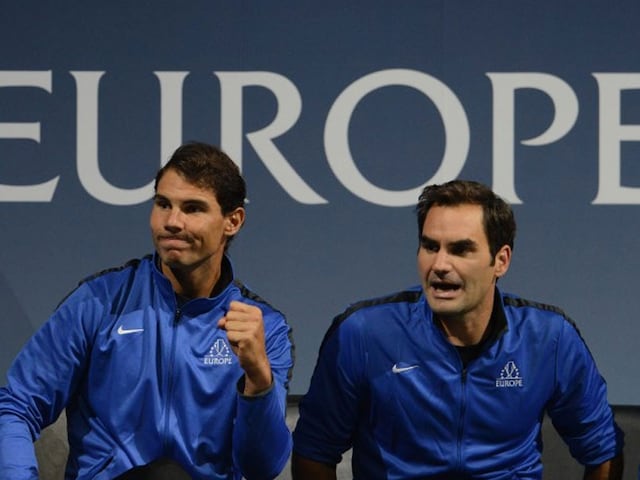 Rafael Nadal said he would like to play alongside career rival and friend Roger Federer in a dream-team doubles pairing at a tournament before they retire. World No.1 Nadal and second-ranked Federer, with 37 Grand Slam and 177 singles titles in total between them, are no strangers to doubles. They played together at the Laver Cup last year. Nadal already has 11 career doubles titles to his name including the 2016 Rio Olympic gold medal with compatriot Marc Lopez. Federer has eight doubles trophies, the last of which came alongside Swiss teammate Stan Wawrinka at the 2008 Olympics in Beijing.

"You never know. You can't say never," said 32-year-old Nadal when asked about the prospect of teaming with Federer at an ATP tournament.

"It is true that our calendars are not easy. Probably something that would have been nice if it happened six years ago, seven years ago, when we were younger.

Nadal comfortably reached the Wimbledon last 16 on Saturday for the eighth time with a 6-1, 6-2, 6-4 win over Australian teenager Alex De Minaur.

He will face unseeded Jiri Vesely of the Czech Republic for a place in the quarter-final.

Nadal has not got past the fourth round since 2011 when he finished runner-up to Novak Djokovic.

Understandably, the 2008 and 2010 champion is wary of looking too far ahead this year.

If he does reach the final, he would prefer not to face Federer, the eight-time champion at the All England Club.

"If I am in the final, I prefer to face an easier opponent. I am not stupid," smiled the Spaniard.

"But if I am in the final, will be great news. Any opponent will be difficult, of course."

Victory on Saturday means that Nadal will retain the world number one ranking at the end of Wimbledon.

However, Nadal insists that staying at the top is not the priority it once was for him.

"Of course, 2008 was a very important moment for me when I achieved the world No. 1 for the first time in my career because in some way I felt that I deserved it," he explained.

"I felt that I was playing so well for already three years, being there, having great results without being No. 1. Some way I believe that was good.

"I did the things good enough to be there at least once. Today is a different story. It is not my biggest goal, to be No. 1.

"Of course, as I said hundreds of times, I prefer to be No. 1 than No. 5. The most important thing for me is be healthy, be happy playing tennis."

Comments
Topics mentioned in this article
Tennis Rafael Nadal Roger Federer
Get the latest Cricket news, check out the India cricket schedule, Cricket live score . Like us on Facebook or follow us on Twitter for more sports updates. You can also download the NDTV Cricket app for Android or iOS.