Novak Djokovic reached the Wimbledon quarter-finals for the 10th time on Monday with a 6-4, 6-2, 6-2 win over Russia's Karen Khachanov. 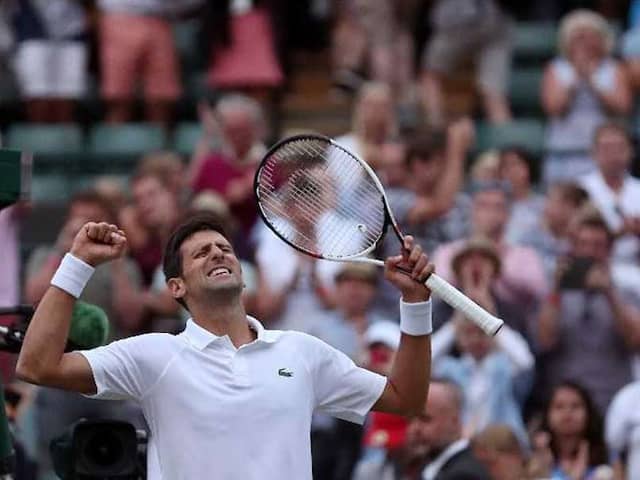 Novak Djokovic reached the Wimbledon quarter-finals for the 10th time on Monday with a 6-4, 6-2, 6-2 win over Russia's Karen Khachanov. Three-time champion Djokovic, seeded 12, will face Japan's 24th seed Kei Nishikori for a place in the semi-finals. It will be Djokovic's 41st appearance in a Grand Slam quarter-final and he will start favourite against Nishikori who will be in his first last-eight at the All England Club.

Former world number one Djokovic has a 13-2 winning record against the Japanese player.

Kei Nishikori became the first Japanese man in 23 years to reach the Wimbledon quarter-finals on Monday and then predicted a "war" with Djokovic to get to the last four.

But having become the first Japanese man to reach the quarter-finals since Shuzo Matsuoka in 1995, Nishikori must now overturn a 13-2 career losing record against three-time champion Djokovic on Wednesday.

"He's always like a big war for me. I always enjoy playing against him. It's always big challenge," said Nishikori.

The Japanese player has already lost twice to the former world number one this year -- on clay in Madrid and Rome.

Although the two have never met on grass, Nishikori is still hamstrung by the knowledge that the last of his two wins against the Serb was in 2014 in a memorable semi-final victory at the US Open.

"Maybe I don't have good results or good record with him, but I always enjoy playing him.

"He's one of the best players on the tour."

Adding to Nishikori's problems is a worrying right arm injury which required extensive treatment and a medical time-out in his win over world 130 Gulbis, the man who had put out fourth seed Alezander Zverev in the third round.

"My elbow was bothering me little bit," admitted Nishikori.

"From the second, it got better and I just tried to stay calm and fight every game."

Djokovic, meanwhile, reached the quarter-finals for the 10th time with a 6-4, 6-2, 6-2 win over Russia's Karen Khachanov.

His match against Nishikori will fall on the first anniversary of him having to retire from his 2017 quarter-final against Tomas Berdcyh with an elbow injury.

That precipitated a lengthy absence from the tour and a worrying dip in form and confidence.

However, the 31-year-old has looked back to something approaching his best at Wimbledon.

He added: "I played very well in Queen's (where he finished runner-up) coming into Wimbledon.

"I haven't spent too much time on the court. I feel physically, mentally ready, fit, positive."

Djokovic's run to the Queen's final on the eve of Wimbledon was his first appearance in a championship match since Eastbourne almost 12 months earlier.

That was a boost after a shock quarter-final exit at the French Open to world number 72 Marco Cecchinato of Italy.

"I didn't feel comfortable on the court for long time. Indian Wells, Miami, most of the clay court season," added Djokovic.

"I just had to go back to basics and hit as many balls as I can on the practice courts, just get that feel.

"Also psychologically obviously, I was so fortunate to have so much success on the tour over the course of 10-plus years.

"I was top 3 player for so many years in a row, it was quite a strange feeling for me not to be able to deliver my game.

"But things are looking much better in the last month and a half."

Novak Djokovic Karen Khachanov Tennis
Get the latest Cricket news, check out the India cricket schedule, Cricket live score . Like us on Facebook or follow us on Twitter for more sports updates. You can also download the NDTV Cricket app for Android or iOS.