Wimbledon 2018: Five Women To Watch Out For At The All England Club

Serena, 36, missed Wimbledon last year while preparing to give birth and has endured a rocky time since resuming her career earlier this year. 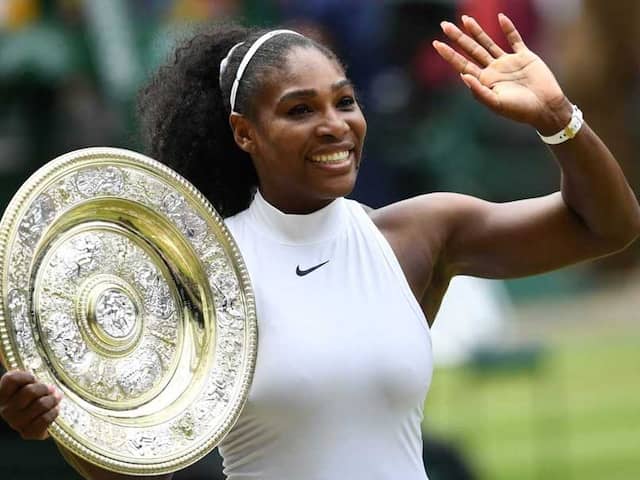 The former world number one's run to the French Open last 16 was ended by a pectoral injury.© AFP

Let us have a look at five of the leading contenders for the Wimbledon women's title and one outsider to watch:

The return of the seven-time Wimbledon champion will hog the spotlight as Williams bids to win her first Grand Slam title since becoming a mother. Serena, 36, missed Wimbledon last year while preparing to give birth and has endured a rocky time since resuming her career earlier this year. The former world number one's run to the French Open last 16 was ended by a pectoral injury. But, regardless of her current lowly ranking, if the 23-time major winner is over that fitness problem she will be a serious contender for yet another Wimbledon triumph.

The defending champion usually reserves her best for the big occasions and is one of the leading candidates to stop Serena making a winning return to Wimbledon. Muguruza was superb last year, dropping just one set in seven Wimbledon matches and routing Venus Williams in the final. The Spaniard has undoubted star quality and her big-hitting game suits grass.

The world number one arrives in London with serious momentum after finally winning her first Grand Slam crown. Halep's triumph at the French Open was a cathartic moment, but her game is more suited to clay than grass. She does boast two quarter-finals and one semi-final from her last four Wimbledon appearances.

Kvitova would be one of the most popular Wimbledon winners in recent years after making her way back to the top 10 following the horrific stabbing the derailed her career in 2016. The Czech was already a fan favourite at Wimbledon after winning the title in 2011 and 2014. She goes into the tournament in good form after lifting the trophy in Birmingham last weekend although a hamstring injury forced a withdrawal from Eastbourne on Wednesday.

Sharapova has not played a match on grass since losing to Serena in the Wimbledon semi-finals in 2015. Since then the Russian has slowly come back from her doping ban and an injury last year. The five-time major winner looked much more like her old self at the French Open, where she made the quarter-finals. But the 31-year-old hasn't won Wimbledon since 2004 and it might be asking too much to end that drought now.

Outside tip for the Wimbledon title:

The 20-year-old world number 18 is the youngest player in the top 40 and on her Wimbledon debut last year was only stopped in the third round by former champion Venus Williams. Inside the top 10 for aces served this year, Osaka has the power from her 5ft 11ins (1.80m) frame to thrive on fast courts as she showed by winning the prestigious Indian Wells title in March, defeating Maria Sharapova and Simona Halep along the way.

Comments
Topics mentioned in this article
Serena Williams Maria Sharapova Petra Kvitova Garbine Muguruza Simona Halep Tennis
Get the latest Cricket news, check out the India cricket schedule, Cricket live score . Like us on Facebook or follow us on Twitter for more sports updates. You can also download the NDTV Cricket app for Android or iOS.