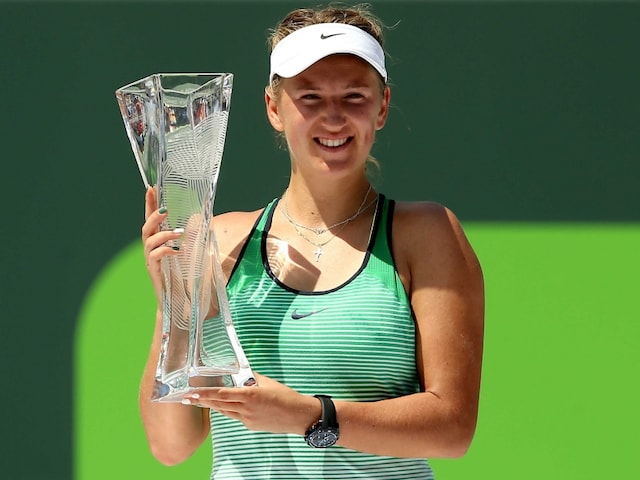 Victoria Azarenka, who missed much of the past two seasons with injuries, won her third title of the year.© AFP

Two-time Australian Open champion Victoria Azarenka, who missed much of the past two seasons with injuries, is making up for lost time, winning her third title of the year on Sunday at the WTA Miami Open. (Read more tennis stories here)

"I have so many great memories here," said Azarenka. "It's always a pleasure to come."

Azarenka, who also took the trophy in 2009 and 2011, won her 20th career title and added to a 2016 trophy haul that includes Brisbane and Indian Wells, where she beat top-ranked Serena Williams in the final two weeks ago.

"I definitely had difficulties getting back with my motivation mentally but I never had any doubt about my abilities," Azarenka said. "The most important was to get my body healthy and to go out and get to where I am today."

Azarenka became only the third woman to sweep the Miami-Indian Wells double in the same season, after Steffi Graf in 1994 and 1996 and Kim Clijsters in 2005.

"It's a lot of work to be able to stay in the present each day and not be distracted," Azarenka said of her 12-0 US run.

Azarenka, 26, will jump from eighth to fifth in the world rankings on Monday, her first time in the top five since March 2014. Kuznetsova, 30, will rise from 19th to 13th.

Azarenka won her fourth meeting in a row over Kuznetsova without dropping a set to seize a 5-4 lead in the career rivalry.

Azarenka broke five times in the first set, including the final game when Kuznetsova sent a forehand wide to surrender the set after 40 minutes.

Broken three times herself but crucially able to hold serve in the second game, Azarenka had five double faults and connected on only 48 percent of her first serves in the opening set.

"For me it was trying to find how I was going to turn it around and to be brave and accept those double faults," Azarenka said. "It was a lot of missed serves. Once I focused on what I needed to do to make it better, it started to get better."

Kuznetsova, while hitting 75 percent of her first serves in the match, won only 45 percent of those points and just 14 percent off her second serve.

"I don't think we played a great game, both of us," Kuznetsova said. "I was kind of not there with every shot I had."

Both struggling players kicked balls at times in their first-set frustration.

"We both came to the final tired, a little bit worked out," Kuznetsova said. "I don't think it was unbelievable tennis. I did what I could. Vika had a confident game. She went for the shots. I think she knew if she didn't go I'd get better in the rallies."

In the second set, Azarenka broke at love for a 3-1 edge and denied Kuznetsova on a break point in the seventh game with her only ace of the match. She then broke for a seventh time on a backhand winner, her 23rd against only eight by Kuznetsova, to end matters after 77 minutes.

"In the second set I served better and created more opportunities," Azarenka said. "She has good defense and it was important to break down that defense by going for my shots."

Both players said they hoped talk the event could move Orlando, Brazil or China, which hosts seven WTA events, was premature.

"I hope it's not going to China because there are already too many events there," Kuznetsova said. "I would like it to stay in Miami."

Comments
Topics mentioned in this article
Victoria Azarenka Svetlana Kuznetsova Tennis
Get the latest Cricket news, check out the India cricket schedule, Cricket live score . Like us on Facebook or follow us on Twitter for more sports updates. You can also download the NDTV Cricket app for Android or iOS.