Karolina Pliskova Struggles Through While Kei Nishikori Cruises At US Open

Karolina Pliskova struggled into the second round of the US Open on Monday while 2014 runner-up Kei Nishikori of Japan needed only 47 minutes to advance. 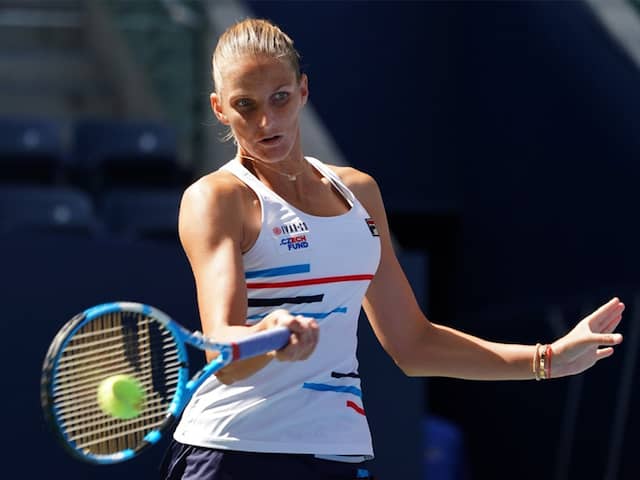 Czech third seed Karolina Pliskova struggled into the second round of the US Open on Monday while 2014 runner-up Kei Nishikori of Japan needed only 47 minutes to advance. Pliskova, who has a chance to finish the Flushing Meadows fortnight as world number one, held off 138th-ranked Czech qualifier Tereza Martincova 7-6 (8/6), 7-6 (7/3) after an hour and 46 minutes. "It's tough to play Tereza," Pliskova said. "We never played and especially tough to play in the first round.

"Not my best performance today for sure, and she made some great shots."

Seventh seed Nishikori reached the men's second round 6-1, 4-1, when 205th-ranked Argentine qualifier Marco Trungelliti retired with a back injury.

"It's a little bit sad to see. He's a great player," a consoling Nishikori said of his stricken opponent. "For me, I played great tennis from the beginning and I'm happy with the way I played today."

Pliskova and her compatriot exchanged breaks of serve through the first six games of their match, Martincova breaking again for a 5-4 edge and coming within two points of taking the set before Pliskova rallied and broke back to equalize at 5-5.

Pliskova took the first tie-breaker with forehand winners on the final two points, then squandered a 3-0 edge in the second set before taking the final four points of the last tie-break, smashing a service winner to claim the match.

"Not happy that I lost three breaks of serve in a row. That's not possible for next time," Pliskova said. "I'm happy I could get through. And happy to win in two tie-breaks. That hasn't happened for a long time."

Pliskova, Barty, Wimbledon champion Simona Halep and top-ranked defending champion Naomi Osaka all have a chance to stand atop the rankings at the end of the US Open.

Osaka and Halep must win the title to be number one. Pliskova needs at least a quarter-final run while Barty is the front runner, defending fewer points from last year's Open than Osaka.

The 37-year-old American is 0-3 in Slam finals since becoming a mother two years ago, her last Slam crown coming at the 2017 Australian Open while pregnant, but she appears to have shaken off back spasms that nagged her earlier this month.

"Ready in NY for the US Open," Williams posted Monday morning on Instagram. "I'm on tonight."

She's facing an emotional rival in 32-year-old Sharapova, who defeated Williams in the 2004 Wimbledon final and the 2004 WTA Tour Championship. Since then, Williams has won 18 matches in a row over the Russian, the most recent in the 2016 Australian Open quarter-finals.

Williams has never played Sharapova at the US Open, which the Russian won in 2006.

Djokovic, who has won four of the past five Grand Slam singles titles contested, launches his bid to become the first back-to-back US Open champion since Roger Federer won five in a row from 2004-2008.

Djokovic owns 16 Grand Slam titles and is chasing the record 20 won by Roger Federer with Spain's Rafael Nadal on 18. Together the "Big Three" have won the past 11 Slam titles and are again heavy favorites.

Comments
Topics mentioned in this article
Kei Nishikori Karolina Pliskova Rafael Nadal Tennis
Get the latest Cricket news, check out the India cricket schedule, Cricket live score . Like us on Facebook or follow us on Twitter for more sports updates. You can also download the NDTV Cricket app for Android or iOS.