Caroline Wozniacki, who beat Anastasija Sevastova in the quarterfinals, will face second seed Angelique Kerber in the US Open women's singles semifinal 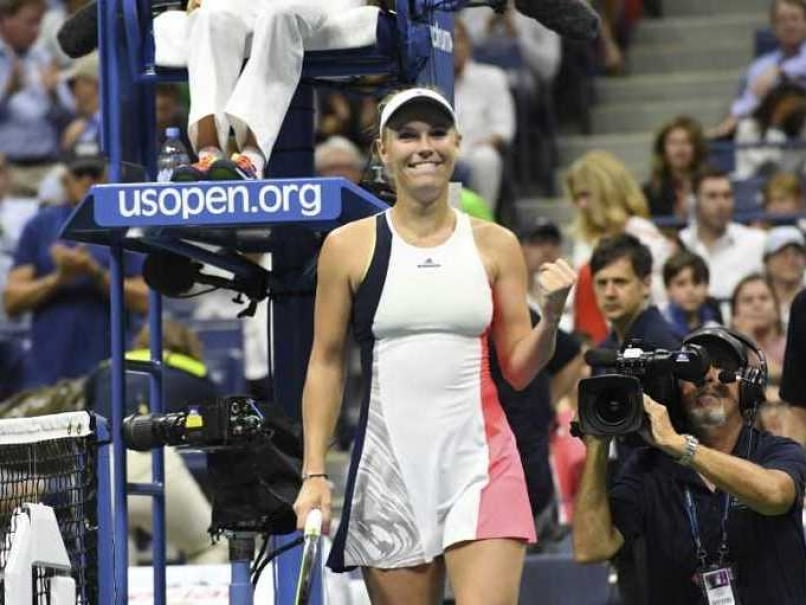 Caroline Wozniacki's dramatic resurgence continued on Tuesday when the former world number one defeated a hobbling Anastasija Sevastova to reach a fourth US Open semi-final.

The two-time runner-up, ranked at a lowly 74 after an injury-hit campaign, eased to a 6-0, 6-2 win and will face second seed Angelique Kerber for a place in Saturday's championship match.

Sevastova, playing in her first Grand Slam quarter-final, never recovered from falling and turning her right ankle in the second game of the opening set.

The 26-year-old hobbled from that point on and the contest was over in just over an hour with the world number 48 having committed 30 unforced errors to the Dane's five.

Wozniacki, the finalist in 2009 and 2014 and semi-finalist also in 2010 and 2011, sympathised with Sevastova after she spent almost three months out of the sport with a right ankle injury earlier this year.

"I feel really sorry for her as I have had that injury before," said 26-year-old Wozniacki who will now return to the top 30 as a result of her surprise run in New York.

"I had to keep pushing her back and make her move."

Sevastova, the Cinderella story of the US Open after she had retired in 2013, won just 12 points in the first set before she briefly rallied late in the match.

Even having her right ankle heavily strapped did nothing to improve her chances of becoming the first Latvian woman to reach the last-four at a Grand Slam.

Australian Open champion Kerber defeated Italy's Roberta Vinci 7-5, 6-0 to reach her second semi-final in New York having also made the last four in 2011.

The German second seed showed remarkable powers of resilience to retrieve three breaks of serve against Italian 33-year-old Vinci in the first set.

In a powerful demonstration of her title credentials, 28-year-old Kerber then wrapped up the second set of her quarter-final by allowing Vinci just five points on her serve.

"It's always tough to play Roberta, she always comes out to play great tennis," said Kerber, who last made the semi-finals in New York in 2011.

"I am happy to win in two sets which means a lot to me."

Kerber could dethrone Serena Williams, who she has already faced in the Australian Open and Wimbledon finals this year, on top of the world rankings if results go her way.

"I remember the semis in 2011. That was maybe a little bit of surprise. I had nothing to lose and I just played great tennis," she said.

"Now I'm a completely different player. I have a lot of confidence and I know how to win big matches."

Vinci, bothered by a foot injury this tournament and playing with her left calf strapped on Tuesday, was ahead with a break on three occasions in the opening set for leads of 1-0, 3-2 and 5-4.

But Kerber kept reining her in and with the seventh break in 12 games, the German took the opener after 54 minutes when Vinci was called for a foot fault.

The Italian aimed sarcastic applause and a thumbs-up at the impassive line judge, but the veteran never regained her composure as she garnered just 10 points in a 24-minute second set.

Vinci, who has yet to decide on whether or not she will continue to play in 2017, admitted Kerber was the better player in the important moments.

"She's on fire. She's won a lot of matches. When the moment is tough and both players are so close, she's focused. She's in good shape. She's No. 2. So probably this is the difference between us," said Vinci.

Comments
Topics mentioned in this article
Caroline Wozniacki Anastasija Sevastova Angelique Kerber Tennis
Get the latest updates on India vs Australia Series, check out the India vs Australia Schedule for 2020-21 and Ind vs Aus live score . Like us on Facebook or follow us on Twitter for more sports updates. You can also download the NDTV Cricket app for Android or iOS.