Stanislas Wawrinka and Richard Gasquet qualified after Milos Raonic, who needed at least a runner-up finish in Paris to have a chance to qualify for the London tournament, lost to Tomas Berdych in the third round of the Paris Masters. 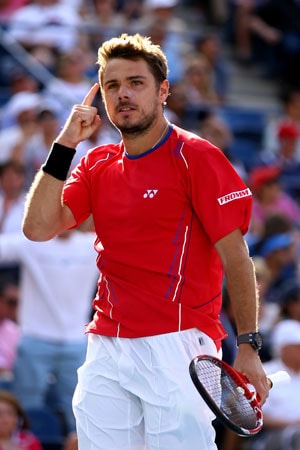 Richard Gasquet and Stanislas Wawrinka grabbed the last two remaining spots for the season-ending ATP World Tour Finals after Milos Raonic lost to Tomas Berdych 7-6 (13), 6-4 Thursday in the third round of the Paris Masters.

Raonic needed at least a runner-up finish in Paris to have a chance to qualify for the London tournament next week, which features the top eight players. This will be Wawrinka's first appearance while Gasquet also qualified in 2007.

Rafael Nadal, Novak Djokovic, David Ferrer, Juan Martin del Potro and Berdych had already booked their spots before playing in Paris. Andy Murray also qualified but withdrew from the event to recover from back surgery.

Roger Federer made the tournament for a 12th straight year by defeating Kevin Anderson of South Africa in the second round on Wednesday. Federer was happy to see both Wawrinka and Gasquet join him.

"Physically we know how tough he is," Federer said. "I think it was important for him mentally to show the players and the press, I guess, and the critics, that he can hang tough with the best guys and do it on all surfaces."

Wawrinka won the Portugal Open and had three runner-up finishes while Frenchman Gasquet clinched three titles this year. They also both reached the semifinals of the U.S. Open.

"Going to London is not a normal thing," Wawrinka said. "You need to have an exceptional year. This year I had very good results to be able to compete for this. What changed this year is that I really tried to enjoy my victories more."

Wawrinka beat Nicolas Almagro of Spain 6-3, 6-2 in Paris on Thursday to reach the quarterfinals while Gasquet defeated Kei Nishikori of Japan 6-3, 6-2.