Somdev Devvarman will fight it out with Japanese Yoshihito Nishioka in the singles summit clash, while doubles final will be an all-Indian affair as Sanam Singh and Somdev face Yuki Bhambri and Divij Sharan. 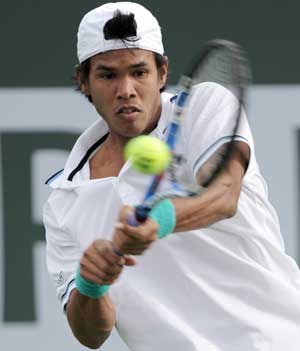 Somdev Devvarman extended his excellent run at the ATP Shanghai Challenger by reaching the singles final with a hard-fought win over Italy's Luca Vanni on Saturday.

Somdev overcame an indifferent start to beat Vanni 1-6, 6-4, 6-4 in a gruelling two hour and 14 minutes semifinal of the USD 50,000 hard court tournament.

After struggling for a long period, Somdev will have a shot at two titles on Sunday as he has already reached the doubles final with compatriot Sanam Singh.

The 143rd-ranked Somdev turned it around amazingly as the Indian broke his rival, placed 170th in the world, twice after losing his own serve thrice.

He will fight it out with Japanese Yoshihito Nishioka for his second title of the season. He had won the USD 100,000 Delhi Open in February.

The doubles final will be an all-Indian affair as Sanam and Somdev face Yuki Bhambri and Divij Sharan, who edged past the Taipei pair of Ti Chen and Hsien-Yin Peng 7-6 (2) 7-6 (2) in the semifinal.

Comments
Topics mentioned in this article
Somdev Devvarman Yuki Bhambri Sanam Singh Divij Sharan Tennis
Get the latest Cricket news, check out the India cricket schedule, Cricket live score . Like us on Facebook or follow us on Twitter for more sports updates. You can also download the NDTV Cricket app for Android or iOS.